Carl Edwards has solidified his spot in the Chase with a second victory Sunday afternoon at Sonoma. For Edwards, it's his 23rd career Sprint Cup win and first ever on a road course. It's the 135th Sprint Cup win for car owner Jack Roush. It's also the first time Ford has seen victory lane at Sonoma since Ricky Rudd did so in 2002. 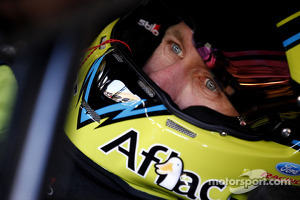 He now joins Jimmie Johnson, Kevin Harvick, Joey Logano, and Dale Earnhardt Jr. as drivers who've earned multiple victories this season. In the last ten races here, there's been ten different winners -- eight of which winning for the first time at a road course. His triumph brought an end to the six week stranglehold Hendrick Motorsports and Hendrick Engines had on the series.

“This is more than special for me,” the victor said. “It couldn’t be a better day for us. We had a lot of problems in the middle of the corners, but I knew if it came down to a fight at the end, I knew we were going to be hard to beat in the braking zones. I had it in my back pocket at that point.”

“I grew up watching Jeff Gordon do well here and to have in my mirror was special. And to have him come to victory lane and congratulate me means a lot to me and something I will never forget.”

Edwards noted that the last lap was a frantic one for him. “Those last couple of laps were very tricky, and that’s the best I’ve got, although it almost wasn’t good enough,” the winner said. “I love road racing and a special thank you to Boris Said for helping me.” Said congratulated Edwards after the race ended in turn 10.

Commenting more about the race, Edwards added, “We had a lot of problems in the middle of the corners, but I knew if it came down to a fight at the end, I knew we were going to be hard to beat in the braking zones. I had it in my back pocket at that point.” Edwards led the final 26 laps of the race. 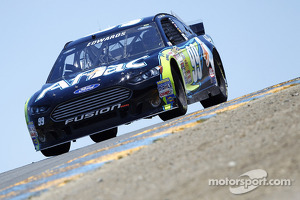 Crew chief Jimmy Fennig commented, “Anytime you get a win it is great whether a road course or an oval. With two wins now, our strategy won’t change. It feels good.”

Added co-owner Jack Roush, “Carl (Edwards) was able to win today because Jimmy (Fennig) gave him a fast car and Carl was motivated and able. Jimmy stopped him on lap 70 and got him good track position, and it all came together. It was good karma today.” Second place went to Gordon, who put on a serious challenge for the top spot on the final lap, finishing a handful of car lengths behind.

“It was a fun and tough race. It was certainly tough for the guys making the calls,” he said. “The car drove unbelievable on new tires, and we felt like King Kong but 8 laps later, you were on ice. Tire management was essential. Gosh, I wish I had those last 5 or 6 laps to do over again. I sort of over-drove the car trying to catch him, but made a few mistakes, to include one that really cost me. I figure if I had stayed smooth and stuck with it, I might have had a chance, particularly if he made a mistake.”

Jeff Gordon finished a very close second, trying in a last-ditch effort to steal the win in the hairpin, but it was to no avail. Dale Earnhardt Jr. snagged his first ever top ten finish at Sonoma with a solid fourth.

Said Earnhardt, “We figured our best strategy was to pit and get new tires more often. With our two wins this season, it allowed us to gamble a bit. (Crew chief) Steve Latarte’s strategy is aggressive, and it pays off at the end. If you do what everyone else is doing, you fall into a situation where you are battling everyone else. When you do something different, it allowed me to be more aggressive. I had a lot of fun today.”

Earnhardt tangled with Matt Kenseth, sending the latter hard into a tire barrier destroying the Toyota. “I was racing him hard coming out of turn 7, and I probably should have yielded to him,” said Earnhardt. “Instead, I ran over a curb and got into him. I hope he’s not too sore.”

Tony Stewart had an off day and finished 19th while Kevin Harvick, who may have had the strongest car, ended up 20th after tangling with Bowyer. Kyle Busch was credited with 25th place after a rough day that saw him spin late in the going. 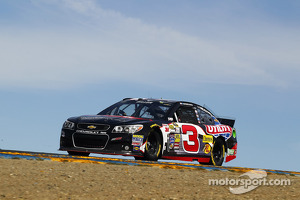 Austin Dillon was the highest finishing ROTY contender in 17th. AJ Allmendinger is credited with leading the most laps with 35/110. He ended up finishing a heartbreaking 37th after a wreck towards the end of the race.

In points, the top seven are unchanged with Gordon holding a 20-point advantage over Johnson. Earnhardt is third, followed by Kenseth, Brad Keselowski, Edwards and Joey Logano. Ryan Newman advanced by three spots to eighth ahead of Harvick and rookie sensation Kyle Larson, who had a disappointing result after losing the power steering.

There were a total of six cautions during the race, lasting for 19 laps.