Carl Edwards may have a future as a weather man. The Roush-Fenway Racing driver believed that a rain delay in the second half of the race wouldn't end their day so he came in for fuel and tires and then waited out the weather. Race ...

Carl Edwards may have a future as a weather man.

The Roush-Fenway Racing driver believed that a rain delay in the second half of the race wouldn't end their day so he came in for fuel and tires and then waited out the weather. 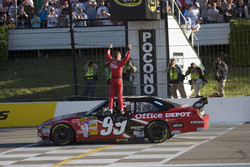 It turned out to be the winning call as Edwards used that strategy -- and a very fast car -- to win the Sunoco Red Cross Pennsylvania 500.

Edwards started the race 15th and was leading the field when the race was red-flagged with 69 laps to go. The delay lasted a little more than 40 minutes before they fired the cars back up and got them back on the track.

Edwards' crew chief admitted that he was worried that they had made the wrong call until he saw the green flag come out again.

"I thought we should stay out but he had a premonition that we wouldn't get rained out," Bob Osborne said after the race. "I'm glad he did because I thought we were done for the day."

Edwards dropped back to 22nd for the restart but got back to the front when the green-flag stops cycled through. He stretched his final fuel run and led the last 13 laps for his fourth win of the season.

"Bob and I were really arguing (during the red flag)," said Edwards, who led a total of 53 laps. "We thought we made the wrong call. It's amazing that it worked out. I feel really good to be back in Victory Lane."

After winning three of the first seven races, Edwards went 13 races without a win. He had four second-place finishes during that span, including a runner-up finish last week at the Brickyard.

Edwards admitted that he was holding his breath in the closing laps on Sunday hoping that he didn't run out of fuel. He knew they couldn't finish the race without pitting again if there was a late caution that forced a green-white-checkered finish. 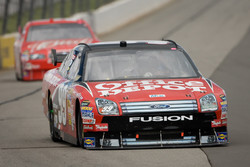 "We were pretty close," Edwards said. "Ford works really hard at (fuel mileage) and everybody here at Roush-Yates works really hard on it. I'm really proud to be here in Victory Lane. A win here at Pocono is very special."

The win also bumped Edwards up to third place in the championship standings.

Tony Stewart started 20th and never challenged for the lead but he was on the same strategy as Edwards and had a good car for the final green flag run. He finished second and credited crew chief Greg Zipadelli with a solid strategy.

"He knows what the situation is and he got us where we needed to be today," said Stewart, who matched his season-best finish.

Jimmie Johnson won last week from the pole at the Brickyard and started on the pole again today. He was a factor throughout the race, leading 34 laps and hung on for a third-place finish despite running out of fuel as he approached the start/finish line.

"We really thought we were going to be OK," Johnson said. "We pitted a lap later than the leaders did. All in all it was a great day. We did a great job on the track and we'll move on to the next one."

Kevin Harvick rebounded from a first-lap incident for a fourth place finish. He started 21st and brought out the first of seven cautions when he made contact with Joe Nemechek shortly after taking the green flag. 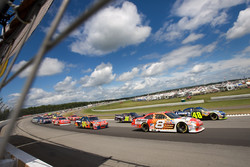 "We had a good car we just got mired in traffic at the beginning of the race," Harvick said.

David Ragan rounded out the top five with his third top-10 finish in the past four races.

"It was a nice run for our team," said Ragan, who picked up his fourth top five finish of the season. "They made a good pit call there at the end. We had a good car with good speed and when you have that you can afford to make some pit strategy calls."

Point's leader Kyle Busch was running in the top five in the closing laps but ran out of fuel with two laps to go. He dropped back to a 35th place finish but still hold a 176 point lead on Dale Earnhardt Jr., who struggled with a loose condition in the closing laps and finished 12th.