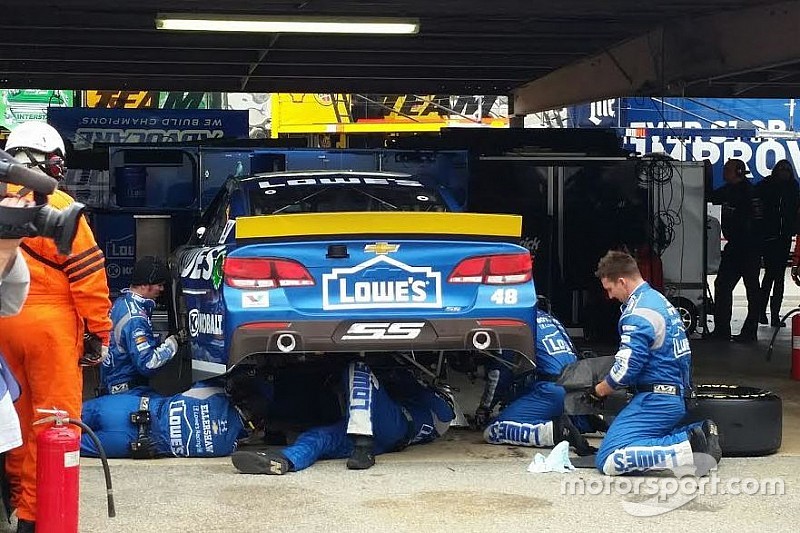 Once again, it’s over at Dover for Jimmie Johnson.

Typically that has referred to Johnson earning one of his record 10 Sprint Cup Series victories at the 1-mile concrete oval while on his way toward one of his six series championships.

A torn rear axle seal on his No. 48 Chevrolet sent Johnson to the garage on Lap 103 of 400 for extended repairs. He eventually made it back to the track but could muster only a 41st-place finish.

It’s heart-breaking for sure, but there isn’t anything we can do about it.

With Kevin Harvick winning the race and locking himself into the next round of the Chase, the bad Johnson left him among the four drivers who failed to advance out of Round 1.

Suddenly, the driver who entered the Chase as tied with the most wins this season (four), is now out of the hunt for a NASCAR record-tying seventh championship this season.

Nothing but perfection allowed

“Back in the old Chase format, a bad finish like this would have taken you out of the hunt anyway, and with this format, you’ve got to be ‘on’ for all 10 races,” said Johnson, who can finish no higher than fifth in the series standings this season.

“We were down so many laps at the end with the rear-end change, there wasn’t much more to gain. I kind of sensed the opportunity to get back into this wasn’t going to present itself.”

Johnson called the axle seal “a $5 part” and something that typically is not exposed to the rigors of race conditions.

“It’s heart-breaking for sure, but there isn’t anything we can do about it.”

Even more shocking than Johnson’s early exit from the Chase is the fact a poor finish came at Dover International Speedway, site of many of Johnson’s most dominant performances in his NASCAR career.

He’s won more races at Dover than any other track and has 15 top-five and 20 top-10 finishes in 28 career races.

Hosting two races each season – in the spring and in the fall during the Chase – Johnson’s team has used strong performances at Dover, including victories, to fuel their championship runs.

Johnson was emphatic that missing the Chase cutoff would not deter the effort from himself or his team the remainder of the season.

Jeff Gordon and Dale Earnhardt Jr. are the only Hendrick Motorsports drivers still remaining in the hunt for this season’s title.

“Moving forward, we want to win more races – that’s what the rest of the season is for us. We want to help our teammates advance and help one of our teammates win the championship.”