Erik Jones isn't driving like a rookie in debut season 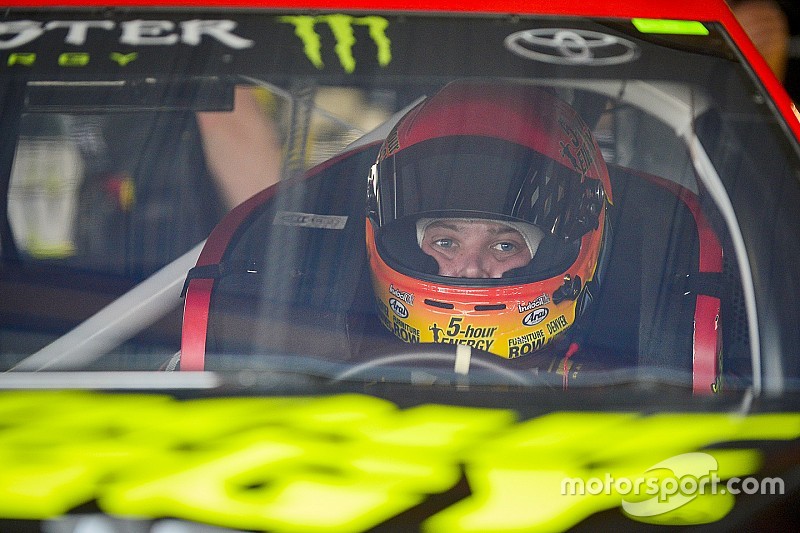 Forget the yellow stripe on the back bumper of the No. 77 Furniture Row Racing Toyota. Erik Jones isn’t performing like a rookie.

After the first seven races of the season, the latest addition to the Denver-based team is currently 14th in the Monster Energy Cup standings.

While that might not sound impressive, he’s also third among all Toyota drivers — and ahead of veterans Matt Kenseth and Denny Hamlin.

“I’ve been really happy with where we’ve run,” Jones said. “We’ve run consistently in the top 10 at Phoenix, Fontana, Atlanta, but we just didn’t get the finishes we deserved. I think at Fontana and Phoenix we really had top-five cars, but things just didn’t play out at the end.

“Either way I look at it, we’ve done as good a job as we can, and we brought fast race cars to the track. We’re just learning more about how to execute, how to close these races out and how to get the finishes we feel like we are capable of.”

As for Jones’ fellow rookies, Daniel Suarez and Ty Dillon, who are 23rd and 24th in the Cup standings, respectively, Jones has left them in his dust. Sure, it’s still early in the season. And Jones anticipates growing pains along the way. But as for acclimating to the Cup cars and finding the necessary speed to be competitive, Jones says that part of his job “hasn’t been too big of a deal.”

“We’ve had good speed pretty much everywhere,” Jones said. “It’s been more of a matter of everything else: the execution of getting on and off pit road, pit stops, strategy, everything that plays into these races.

“We’re learning more about that as a team. It’s a whole new group with Chris Gayle, who is a rookie crew chief. We have a lot of guys on the team that are first-year Cup guys so we’re all learning together and trying to figure it out more and more as we go.”

With an average finish of 13.8 at unrestricted race tracks, the 20-year-old freshman is holding his own. And that’s a good thing, particularly for his teammate Martin Truex Jr., who hasn’t noticed any significant changes in the organization since Jones’ arrival.

“Those guys fit right in with us, and everything is really going smoothly as far as I can tell,” Truex said. “So from my point of view, that's really been the difference, is just there really hasn't been a difference.

Other than communication with his teammate, Jones prefers the lone wolf mentality on the tour. Rather than join the ‘Brat Pack’ of his contemporaries, the driver relies on support outside the race track.

“I don’t hang out with the other drivers too much,” Jones said. “I kind of do my own thing. I show up at the race track to do my job, and that’s kind of always how it’s been. I’ve always lived by the mentality that you bring your friends to the race track with you.”

This weekend, Jones is catching up with his family and friends back in his hometown of Byron, Michigan. Then it’s on to Bristol Motor Speedway, where Jones has one win and three poles on the Xfinity tour and a sixth-place finish in his only truck start.

“Bristol is a track I feel pretty good about, as well as when we get to Charlotte (Motor Speedway) next month,” Jones said. “There are a lot of tracks I really enjoy. Dover is one I really enjoy going to, and it’s coming up here next month, as well.

“There are a few tracks I have marked off that we’ve always been fast in the NASCAR XFINITY Series in, and tracks I’ve always felt pretty comfortable on.”