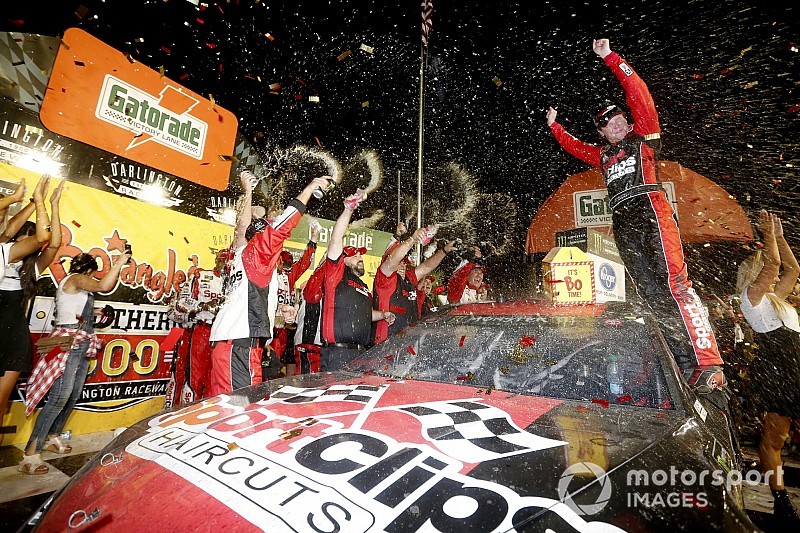 Kyle Busch, who started the race from the rear of the field, was closing on Jones for the lead but tagged the wall twice in the final two laps, allowing Jones to escape with his first Monster Energy NASCAR Cup Series victory of the 2019 season.

The win is the second of Jones’ career, with his first coming last July at Daytona International Speedway.

With the win, all four of Joe Gibbs Racing’s Cup series drivers have now won at least one race this season.

"I mean I'm worn out, mentally and physically, more mentally than anything really. I was really running hard," Jones said. "He's one of the best guys out there. This (car) was good and I was glad to hold him off and finally get to Victory Lane. I feel like this has been coming for a long time so it just feels really good.

Asked what kind of statement his win was, Jones said: "Is there anything more to say? There's been a lot of doubt and speculation. I've put my heart and soul into this race team. This is my living and how I want to make a career and what I want to do.

"It doesn't get any better than this. On my list, this race is really high and it's going to look damn good to see my face on that trophy."

Following the break between Stages 2 and 3, all of the lead-lap cars pit for tires and fuel and Kyle Busch was the first off pit road.

On the restart on Lap 207, Kyle Busch was followed by Jones, Larson, Denny Hamlin and William Byron.

By Lap 230, JGR drivers held the top three spots with Kyle Busch leading the way followed by Jones and Hamlin. Larson ran fourth and Alex Bowman had moved up to fifth.

With 125 laps remaining in the race, Kyle Busch maintained a 1.8-second lead over Jones as Hamlin continued to run in third.

On Lap 249, Keselowski became the first to make a green-flag stop for new tires and fuel. He actually missed pit road on his first attempt and had to make another lap around the track before his stop.

Several more drivers dropped to pit road on Lap 251 as several more teams elected to make a green-flag stop. From this point, everyone would still need to make one stop for fuel.

Some of the contenders for the win dropped down to pit road on Lap 257, including Larson, Jimmie Johnson and Kurt Busch.

Once the cycle of stops were completed on Lap 260, Kyle Busch remained the leader but Jones was right on his rear bumper.

All of the lead-lap cars decided to pit under the caution with Larson the first off pit road. On the restart on Lap 282, Larson was followed by Jones, Kyle Busch, Bowman and Keselowski.

Larson and Jones traded the lead after the restart before Jones finally escaped with the top spot on Lap 283.

With 60 laps to go, Jones had opened up a small but steady lead over Larson as Kyle Busch ran third. Bowyer was fourth and Harvick had moved up to fifth.

With 47 laps remaining, several drivers headed down pit road to make the final stops for fuel to make it to the finish.

Once the cycle of stops were completed on Lap 328, Jones remained in the lead but Kyle Busch was on his rear bumper.

On Lap 345, Jones put Joey Logano a lap down while he maintained roughly a half-second lead over Kyle Busch. Larson was closing in on Busch from third.

Bowman was forced to pit on Lap 348 for tires after tagging the wall.

With 10 laps to go, Jones’ lead over Kyle Busch was just over a half-second as Larson remained in third.

Kyle Busch couldn't catch Jones without 'knocking the wall down'