The NASCAR Hall of Fame inducted five new members during its annual induction ceremony in the Crown Ballroom of the Charlotte Convention Center on Friday. Richie Evans, Dale Inman, Darrell Waltrip, Glen Wood and Cale Yarborough officially became members 11 through 15 of the Hall by being inducted as the third class.

"I'm kind of familiar with this ring," Inman said of the momento that is given out to all inductees. "For the last two or three years," Richard (Petty) has put it in my face a bunch of times." 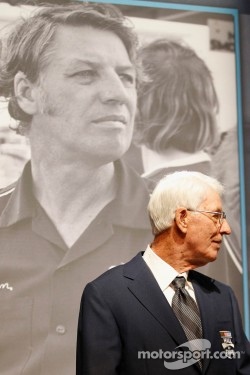 As a cousin of Richard Petty, Inman became the third member of that family to be inducted, with Petty being a part of the first class of inductees and his father, Lee Petty, being inducted in 2011.

Inman was Richard Petty's wingman, of sorts. He served as crew chief at Petty Enterprises throughout most of Petty's driving career. Petty may have seven Cup titles, but his cousin, Inman, one-upped him in that category, claiming an eighth championship as crew chief for Terry Labonte in 1984 during a period of time that Petty and Inman went their separate ways and Inman crew chiefed elsewhere.

Evans may not have been a fixture in NASCAR's Sprint Cup Series but he was to modified racing what Hall of Fame member Richard Petty was to Cup racing -- king. Evans claimed NASCAR's modified championship nine times in 13 years, eight of those coming consecutively between 1978 and 1985. The 1985 championship was awarded to Evans post-death, as he was killed in a crash a few weeks earlier at Martinsville Speedway. After posting 12 wins that season, Evans clinched the title several weeks prior to the season finale. 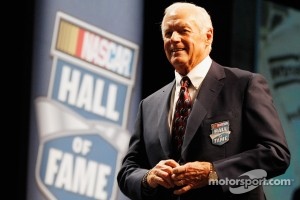 "I know you're here in spirit as the No. 61 appears often in my life," she said. "Even as I checked into the hotel, the No. 61 came up. I'd especially like to thank the Hall of Fame voting panel for stepping outside the box and making Rich the first driver inductee not to have raced in NASCAR's top series full-time."

Waltrip is a three time Sprint (then-Winston) Cup champion, claiming consecutive titles in 1981 and 1982, and then another one in 1985 while driving for fellow-Hall of Famer Junior Johnson. He is tied for fourth with another Hall of Fame member, Bobby Allison, on the Sprint Cup all-time win list with 84 trips to victory lane. He moved to the television broadcast booth after his retirement from competition at the end of the 2000 race season.

"I was telling (wife) Stevie earlier this week that I hoped I wouldn't get emotional tonight, but she reminded me 'Honey, you always get emotional about the things you are passionate about,': Waltrip said. "This night, these men, and the people in this room, they're what inspire me." 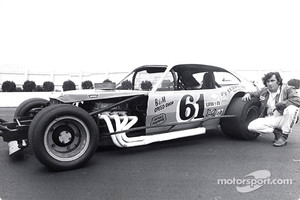 Photo by: Motorsports Images and Archives

Waltrip is the second member of the NASCAR Hall of Fame to find a home in the broadcast booth after a career behind the wheel, following in the footsteps of second class inductee, Ned Jarrett.

Wood, along with brothers Leonard and Delano Wood, started what is now the longest-running team in NASCAR -- Wood Brothers Racing. Wood began his racing career driving for the family team and found success behind the wheel. He was still a competitive driver when he opted to climb out of the famed No. 21 car and took on other duties within the team that got its start in 1950. Altogether, Wood Brothers Racing has 98 wins at the Sprint Cup level, the most recent being the 2011 Daytona 500 with Trevor Bayne behind the wheel. Other Hall of Fame members, including Cale Yarborough and David Pearson, are among the lengthy roster of drivers who won races in the No. 21 car. 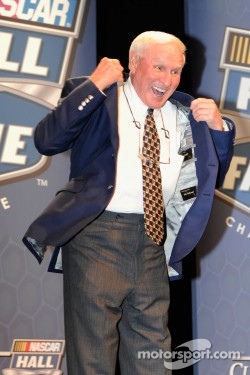 "This is not just about me being inducted in the Hall of Fame," Wood said. "It's also about the Wood Brothers. And it's about NASCAR, and I'm proud to have been a NASCAR driver and car owner for the past 60 years, and I'm proud of this great honor."

Yarborough set a NASCAR record in the late 1970s that stood until Jimmie Johnson put together a string of five championships to top it. Yarborough's Cup titles in 1976, 1977 and 1978 made him the first driver to claim three-consecutive Cup championships. Johnson has been the only driver to meet or exceed the accomplishment. Yarborough has 83 Cup wins to his credit, including four Daytona 500 victories. The only other driver with more Daytona 500 wins is Petty with seven.

"Racing is like a big, tall ladder," Yarborough said. "When you begin, you're at the bottom, and it's a long, hard climb. And tonight, I feel like I'm standing on the top step."