Five things to ponder after the Brickyard 400 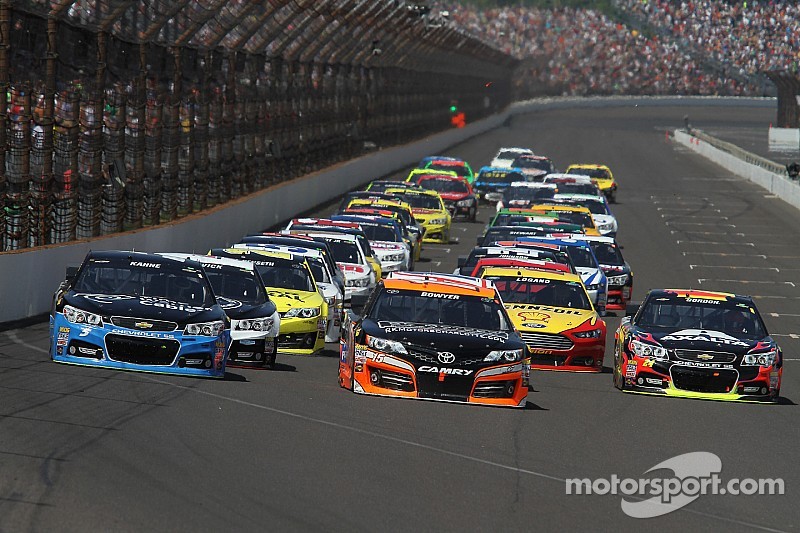 Indianapolis is in the books and Jeff Gordon has made history as the first five-time winner of NASCAR's Brickyard 400.

The 2014 edition of the 'Crown Royal Presents the John Wayne Walding 400 at the Brickyard Powered by BigMachineRecords.com, part of the Kroger Super Weekend at the Brickyard is over! Yes, that's the official name. Jeff Gordon has won, Kasey Kahne is mad, NASCAR is going to throw the book at Denny Hamlin, and Joe Gibbs threw a plane at Tony Stewart.

Jeff Gordon got his 5th Brickyard 400 with a combination of a great car, good pit strategy and air. Yep, air. Gordon told his crew all day long that the car was great in clean air, while he really struggled in traffic. At one point he came on the radio and said traffic was just 'killing his car.' Once Gordon was able to clear Kasey Kahne on the final restart, it was game-over. Alan Gustafson needs a lot of credit for allowing the track and the race to come to the No. 24 instead of trying to out-think-the-room like some of folks did (Darian Grubb and Denny Hamlin). By staying out just a few more laps than the No. 5, it gave Gordon the chance to have enough fuel and also enjoy slightly fresher tires late.

Tires mattered today late, but not exactly the way we thought it would. With Kahne having pitted around lap 127, he put himself in a box with both tires and fuel. I get the strategy, but I don't like it. I'd much rather have my guy with better tires late in a run at the end of a race than at the start with a five lap advantage even. That combo kept Kahne from being able to clean up his tires the way he wanted to on the restart and Gordon was ready to pounce. When the No. 5 couldn't get the tires to stick on the restart, even the 'King Of Brutal Restarts' himself was able to clear double K. Game over.

3.)  A fifth win at Indy could lead to a fifth December at the head table

With Gordon going to Victory Lane, it gets back to a Brickyard trend of having championship caliber drivers taking the win. The last few races were an abberation with Paul Menard and Ryan Newman kissing the bricks. Gordon's win sends another strong message to his rivals that he is fully capable of not just of winning races, but winning another Cup championship as well. If you look at the history of the Brickyard 400, you can see how it gives a late-July boost to title contenders and reinforces their place as one of the teams to bear. We saw yet another example of that on Sunday.

Indianapolis Motor Speedway is indeed a special place. It is sacred to all of the NASCAR drivers and teams. You can tell by the comments and their emotions what it means to race and to win at Indy. NASCAR will always be at The Brickyard and they should be. As the top series in American motorsports, it has to be featured at Indy. That said, the uniqueness has worn off for the fans. The stands don't lie. The racing is not good at Indy for NASCAR, even if the story lines sometimes are. It is getting harder and harder for NASCAR to create iconic moments at this track. Because of that, it is going to continue to be a struggle filling the stands moving forward. Do I have an answer? No. The venue can only make up for the racing for so long though. I liken a great race track to a great golf course. There needs to be multiple ways for the golfer to approach and attack the holes and there needs to be multiple styles of driving that can all work on a great track. That doesn't seem to be the case at Indy right now. Not sure how to fix it, but it is reality.

Did you see Kyle Larson finish 7th? Did you see Austin Dillon finish 10th? The future is bright. Somewhere, on a really nice charter jet, Juan Pablo Montoya is wondering why he could never get that No. 42 to go like the kid they call 'Young Money' has this year.
My name's Ryan Hyatt and I'm on the radio. Catch us every Monday night at 7pm est. where Motorsport.com manager Nick DeGroot stops by to debate some of the hottest topics in the world of motorsports; click HERE to tune in.

At age 42, Jeff Gordon shows no signs of slowing down