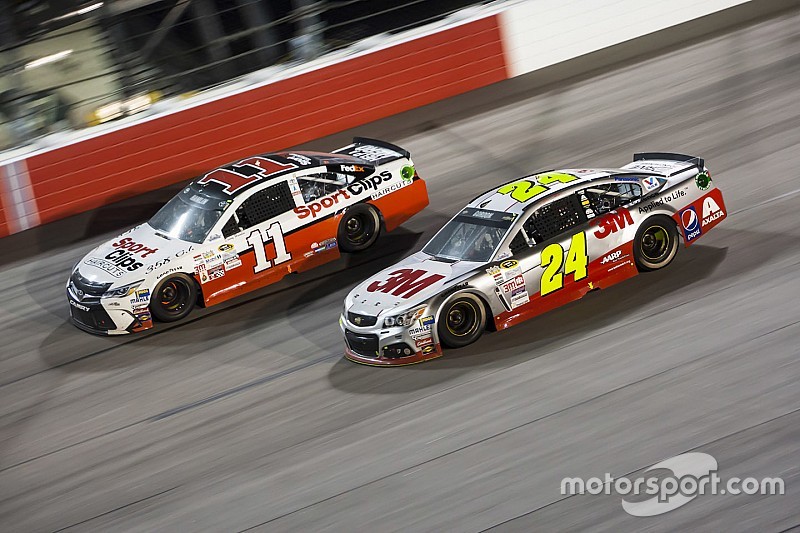 Points leader Kevin Harvick will start Sunday's Darlington throwback race from pole position – but what are his chances?

In 2004, Darlington still had two races on the Cup schedule, which were both won that year by Jimmie Johnson. When the series consolidated the two races into what is now the Southern 500, it was Greg Biffle's turn to pick up two wins in succession in 2005-2006.

In the time since, the race has seen no repeat winner. What it has seen drivers dominate (Kevin Harvick, 2014), a major upset (Regan Smith, 2011) and pretty much everything in-between.

A lot of different teams – almost always a different one each year – have strung together great runs on race day.

But a few teams got to Victory Lane just by seizing the moment in the crucial final stretch. Smith needed 11 laps out front for his 2011 triumph, Matt Kenseth denied a very dominant Kyle Busch with 17 laps in the lead in 2013 and Carl Edwards came from two laps down to claim a last-gasp triumph last year.

One race per year makes for a much poorer sample, but Darlington would probably be a tough one to call even if it still had two races on the calendar. It's hard to tell who'll have the dominant car – and, even if you can answer that, there's a very strong chance that won't give you the name of the winner.

There are, however, names that stick out – and the main one is probably current points leader Kevin Harvick.

Harvick's early-career form at Darlington has been patchy. During his RCR tenture, he led just 63 laps in 17 starts and posted a 17.9 average finish (well below what would be a median track for Harvick, even in that time).

But his Darlington debut for SHR yielded a dominant 2014 win – one that, admittedly, nearly came apart with a four-tyre pit call on a late caution – and he was a genuine threat for victory in 2015 as well.

Two starts is not a lot to draw on, but consider this – no other driver made the top five at Darlington both last year and the year before.

Prior to Harvick, Kyle Busch would've been the best bet. Since his 2008 Gibbs switch, he has led a lot more laps than anyone else, more than current teammates Kenseth, Edwards, Denny Hamlin (and even alliance driver Martin Truex) combined. He's only got the one win to show for it, but that's how Darlington is.

Hamlin's Darlington performances are likewise remarkable, albeit for a different reason. The #11 driver's average finish at the track in Cup is 6.5 from 10 starts, which is properly impressive. It doesn't mean that Hamlin is always in contention at Darlington – nobody is – but it does suggest he's been superb at grinding out results.

And while any Darlington discussion would be incomplete without a mention of seven-time winner Jeff Gordon, the 500-mile race is likely to prove pretty tough for the semi-retired Cup legend - and his record of the past five years at the track only features one top-five appearance.

Instead, Jimmie Johnson looks better-poised as a Hendrick option, having bossed the race as recently as 2012.

Almost all of NASCAR's top organisations will be going to Darlington with memories a recent success at the track. JGR won last year, SHR – in 2014, Hendrick – in 2012. Even the #78 Furniture Row car has been in Victory Lane in 2011 with Smith.

As for Ford's top team Penske, its most recent Darlington wins date back to 1975 – a season sweep courtesy of Bobby Allison.

Between 2008 and 2013, with a very versatile roster of drivers, the team led all of one lap at Darlington. But something clicked in 2014, as Logano led the first 37 laps of the Southern 500, although he would eventually slump down the order and retire with a mechanical issue.

Last year, Keselowski was on pole and headed the race for 196 laps, narrowly missing out at the very end. He took runner-up and Logano was fourth.

The 2016 season been a good one for Penske. A return to Darlington Victory Lane would arguably make it a great one, and such an outcome looks plausible.

Kyle Larson's sudden (but well overdue) win at Michigan means that the four drivers who looked set to points-race safely into the Chase can no longer do so. And Ryan Newman, who is best at exactly that, is now first on the outside.

Newman is good at Darlington – his average finish is one of the best among active drivers because he's been very reliable at picking up points. His 15-point deficit to a transfer spot is not nothing, so the usual finish on the brink of the top 10 might not be enough. But the regular season finale venue Richmond has also been a good one for Newman, so he can still salvage a Chase berth.

Among his direct rivals, Jamie McMurray shone back in 2010 with a pole-to-runner-up run, but has hardly wowed since, while Austin Dillon's record is inconclusive.

Larson's win, however, has virtually no impact on Kasey Kahne and might, in fact, be beneficial, because the #5 team can now absolutely throw all caution to the wind.

For Kahne, Darlington's a good track to do that at. He's never won there, sure, and only has 4 top 10s in 14 starts – but he also took four poles (three in first three attempts with RPM's predecessor Evernham and one with Red Bull).

He led 124 laps at the track in 2011, eventually coming home fourth behind Smith, Edwards and Keselowski.

Granted, with HMS Kahne hasn't had a Darlington run anywhere near this good, but he clearly gets the track (which also gave him two wins in Trucks). Whatever gambles the team can attempt this weekend will all be worth a try.