Johnson in his Hendrick Motorsport Chevrolet will make his 400th career NASCAR Sprint Cup series start in the 55th running of the Daytona 500.

DAYTONA BEACH – Few athletes have ascended to the top of their sport like Jimmie Johnson, who will be making his 400th NASCAR Sprint Cup Series start in the 55th running of the Daytona 500 at Daytona International Speedway on Feb. 24. 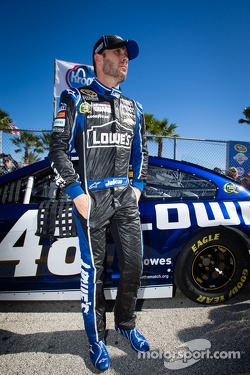 Johnson’s prolific career rivals – and in some cases, surpasses – those of some of the most prominent talents in NASCAR history.

Eight drivers have won 60 races in the NASCAR Sprint Cup Series. Johnson was the sixth fastest to reach the milestone when he notched victory No. 60 on Nov. 4, 2012 at Texas Motor Speedway in his 397th start. The five drivers that reached the milestone in fewer starts: Jeff Gordon (318), Darrell Waltrip (321), David Pearson (356), Richard Petty (358) and Cale Yarborough (380). Dale Earnhardt (454 starts) and Bobby Allison (493) also have reached 60 wins in their careers.

Johnson has produced at least two NASCAR Sprint Cup wins per season for the last 11 consecutive seasons, and all of them with the same sponsor – Lowe’s. Only Johnson and Jeff Gordon (DuPont) have had the same sponsor for each of their first 400 starts.

Below is a timeline of Johnson’s career highlights on his way to 400 starts:

Danica Patrick and Tony Gibson talk about their Daytona 500 strategy