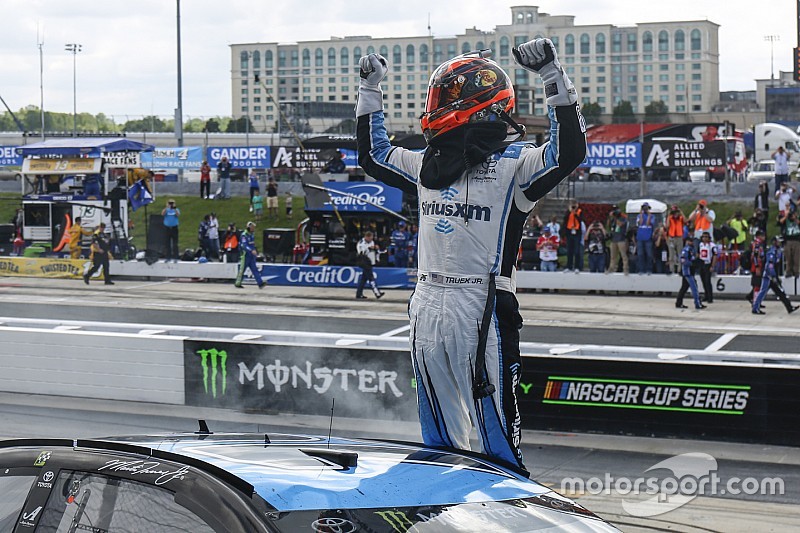 The change from weekly good finishes to weekly contender for race wins has been profound for Martin Truex Jr.

While the lack of an early-season win may have had some questioning how well the transition was going for Truex and his crew chief, Cole Pearn, to Joe Gibbs Racing this year, Truex was still piling up solid results.

What Truex and the No. 19 Toyota were not doing was leading laps, which naturally puts you into position for wins.

That has changed in a big way the last three races.

In the season’s first eight races, Truex led a total of 14 laps. In the last three – which includes wins at Richmond and Monday at Dover – Truex has led 329.

Truex believes his team has had the speed all season but execution seemed to be a sticking point for the No. 19 – something that has dramatically improved of late.

“I think we're getting there. For us, I think it’s just been little details we’re doing better,” Truex said after his win Monday. “Pit road has been a big deal. We had some trouble earlier in the ear. We were still able to get some second-place finishes.

“The last couple weeks I just feel it’s been execution. We’re doing all the little things right. The pit crew is doing an amazing job getting us track position, keeping it when we have it. Our cars are fast.”

Monday’s win at Dover – Truex’s third of his career at the track – even came with Pearn electing to try a new set-up on the car.

While the previous one had produced good results in recent years, they wanted to be “even better.”

“I think we’d kind of been stuck working around the same things for the last four or five years. We were fortunate enough to get a win a few years ago,” Pearn said. “After that, we’ve always been third, fourth. Always been good, but just fought kind of the same terminal issues.

“We kind of had this one circled on the calendar to take a different approach, get off of what we’ve been doing. It worked awesome.”

In just a few short weeks, Truex and his No. 19 team have taken on the look of the one of recent seasons at Furniture Row Racing that contended for wins and championships on a regular basis.

The biggest challenge now is to ensure it continues.

“It’s a lot of fun to come out here and win races. This was a really fun weekend, a challenging weekend for sure,” Truex said. “Those are the kind you like to come out on top of.”

The other side of Alex Bowman - Part 5