For Kurt Busch the business of racing starts at Phoenix 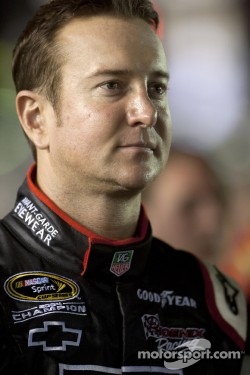 MOORESVILLE, N.C. (Feb. 28, 2012) – It’s time to get down to business. The unspoken idiom is a sentiment echoed throughout the NASCAR Sprint Cup Series garage as competitors now turn their attention westward to Phoenix International Raceway, where the second race of the 2012 season takes place Sunday. The pageantry, pomp and circumstance of the Daytona 500 is unlike any other event on the circuit, but industry insiders say that the real racing season begins after the series leaves the beaches of Daytona.

While competing and winning at Daytona is the penultimate accomplishment for NASCAR drivers, the mile oval in the Arizona desert outside Phoenix is often thought of just as highly by young racers growing up out West.

Kurt Busch grew up in Las Vegas and spent the early years of his career competing at tracks up and down the West Coast. When he wasn’t racing himself, the 2004 Sprint Cup champion made the trek to Phoenix regularly for Sprint Cup races during the 1990s just to get the opportunity to watch guys like Dale Earnhardt, Terry Labonte and Davey Allison compete. Having grown up watching NASCAR superstars race at Phoenix, the opportunity to race at the “Desert Mile” equated to arriving in the big time.

Busch made a number of starts at Phoenix while he was coming up through the ranks, competing in series such as NASCAR’s Southwest Series tour. It was in 2000 that Busch visited the track for the first time as a competitor in NASCAR’s top touring series, competing in both the Camping World Truck Series race in March, and then in the Sprint Cup race in November later that same season.

While Busch only has one win in Sprint Cup competition at Phoenix, it is a track at which he has found great consistency and success. Busch has finished on the lead lap in 13 of the 18 races in which he’s competed, and he’s completed all but 18 of the 5,686 laps run during those 18 starts, giving the former Sprint Cup champion a lap completion rate of 99.7 percent. Additionally, Busch has led no less than 20 laps during six of the last eight Sprint Cup races at Phoenix.

For many in the sport, this weekend’s Subway Fresh Fit 500k signals the real start to the season. For Busch, it’s a trip to the track at which he feels a great deal of nostalgia.

How does the loss of a day to prepare for the West Coast swing affect you and the team?

“It’s obviously not ideal, but at least we were given a little bit more time with them moving back the check-in time for the team transporters to Friday morning. Being a smaller operation made it a little more stressful. The guys were able to go back to the shop on Monday and Tuesday between the Shootout and the 500, so that helped out a lot. It’s just hard. We already had a short turnaround and it was compounded with the weather, but it is what it is.”

What are your thoughts on heading to Phoenix?

“It’s a place where I grew up watching Cup races. When I was a kid, they didn’t have Las Vegas Motor Speedway, yet. So we traveled down to Phoenix to watch the big show. The years I went, guys like Terry Labonte, Davey Allison and Dale (Earnhardt) Sr., were down there winning. It was so cool. One year, we got pit passes to walk down pit road on Sunday morning at the start of the race. I was in awe that this was the big time. It’s amazing how it has all turned out. So Phoenix, to me, was the track I grew up watching races on. Then, when I got there as a racer to race in the Southwest tour, that was basically our Daytona 500. So, when you were racing on the West Coast, Phoenix was our Daytona. That’s how big Phoenix was for us.”

You’ve been fairly successful at Phoenix. To what do you attribute that success?

“That track fits my driving style with the flat, one-mile track layout and how tight the corners are. It’s a place where you have to slide the car just right to maintain a good pace around there. The track is a little unique with the old asphalt and the new asphalt. The other thing that separates Phoenix is how you have to balance the differences with turns one and two verses the differences in turns three and four. I have just always been able to understand that track and what the car needs to do to be fast.”

What is the toughest part of racing at Phoenix?

“The toughest part, I would say, is not to overdrive turn one. You have to get the car to really turn through the center of three and four the right way. Each corner has its own little bit of toughness to it and it challenges you throughout the fuel run.”

Many consider this weekend’s race the real start to the season. What are your thoughts on that?

“Everybody goes to Daytona thinking about the big prize, which is the trophy. You want to have the win at Daytona and then you just deal with the points no matter where you end up. Phoenix is the first race of the year where you are into a regular sequence of Friday practice, Saturday qualifying and Sunday race.”

How much of a driver’s track is Phoenix?

“It’s more of a driver’s track and you have to have a car built around a low center of gravity just because the track is so flat and there isn’t any banking to help the car turn. It’s a track that really has hardly anything to do with aerodynamics and has more to do with the mechanical set-up of the car.”

Bobby Labonte and team prepare for long haul to Phoenix