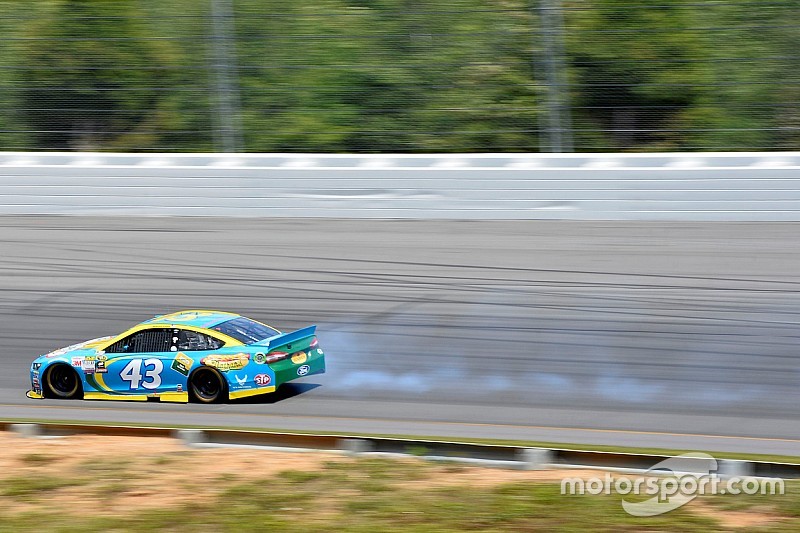 Can the Blue Oval teams redeem themselves on their home track this weekend at Michigan?

Ford Performance did not live up to its name at Pocono Raceway.

Joey Logano, who finished fourth, was the only Fusion to post a top-10 finish.

Logano overcame being mired in traffic twice — first from changing a rear gear which knocked him back to 43rd for the start of the race and again on Lap 26 after a speeding penalty. But the next best Ford in the Axalta 400 field was Greg Biffle, who finished 12th.

The most positive comment Logano had after the race was, “I’m happy with the way it ended.”

The need for speed

Entering the weekend, Logano had two top fives and four top 10s in his last five Pocono starts. The fifth race resulted in an engine failure. But the driver was concerned that his car lacked speed from the moment the team unloaded on Friday.

Sure, it’s possible that Ford engine package may have been a bit too conservative last weekend. Yet horsepower hasn’t been an issue for Logano in 2015. He has four poles in the first 14 races and has transferred to the final round of qualifying in 12 of those events.

And last Friday, Logano transferred to the final round in qualifying and made up tremendous ground throughout the race.

But it was clear the No. 22 Shell/Pennzoil Ford had nothing for the top two Chevys — Martin Truex Jr. and Kevin Harvick — which have dominated the field in 2015.

“We kept fighting hard,” Logano said. “This was one of those blue-collar days, just working hard all day on the car and on pit road the guys did a good job making my car faster and got to where we were a top-five car at the end.

“We were maybe a little better than the 48 (Jimmie Johnson, third), but nothing for the 4 (Harvick) and the 78 (Truex).  Those guys have been rocket ships each and every week and we’ve got to figure out a way to catch up to them – figure out what they’re doing or try to come up with our own way – something, but they’re really fast right now.”

Team Penske has been the class of the field in the Ford Camp over the last two years. Roush Fenway Racing’s struggles have been well documented during that same period. But the comments coming from Logano and Brad Keselowski indicate that it might be a greater issue affecting the Ford teams.

I’m proud of my team guys, the mechanics and pit group, and all the other parts need a lot of work.

“I thought my team guys did a really, really good job making the most of a car that’s way behind what it needs to be to be a winner in this series,” said Keselowski, who finished 17th. “I’m proud of my team guys, the mechanics and pit group, and all the other parts need a lot of work.”

The Quicken Loans 400 at Michigan International Speedway is a huge race for Ford, which is located about an hour east of the track in Dearborn. Penske Corporation is in Bloomfield Hills not far from Roush Industries in Livonia.

Ford is unveiling its new engine package this weekend. The configuration was tested in the All-Star Race at Charlotte Motor Speedway last month where Greg Biffle won his segment in the Sprint Show Down. Keselowski dominated the second and third segment of the All-Star event before finishing in the top 10 with Logano.

Last year at Michigan, Keselowski posted an average starting position and finish of 5.5 in both races. Since joining Team Penske in 2013, Logano has earned one win (from the pole), two top fives and four top 10 finishes. He’s led laps in each of those four races on the 2.5-mile track.

Still, it’s understandable that the Team Penske drivers are frustrated. A Ford hasn’t won in the last nine races.

Team Penske Competition Director Travis Geisler says the organization certainly needs “to find a little bit”. But the company is far from “panic mode yet”.

“We’re definitely working hard to close the gap,” Geisler said on Sirius XM NASCAR Radio on Tuesday. “I think the whole field is trying to close the gap to the 4 and the 78 right now. If you watch, those cars definitely have a lot of speed and are able to dictate their races regardless of how the strategy goes. They kind of find themselves out front because the cars are that fast. That’s something that we have to get back.

“You can win races here and there the way we won Fontana — where it was great strategy and great aggressive driving by Brad and managed to get one there. But we need to be faster to be able to go back and make wins happen on a more regular basis where you’re not relying for strategy to play in your favor.”

After earning his first top-five finish of the season at Dover two races ago, Aric Almirola experienced his first DNF of 2015 at Pocono Raceway on Sunday. Almirola started 25th and  completed just 88 laps before his engine expired.

His engine was diagnosed with a failed roller lifter. It was the first failure of this nature since Roush Yates Engines switched to the new manufacturer this season.

“It’s a shame,” Almirola said of the No. 43 Nathan’s Famous Ford. “It was not a good weekend for us.  We struggled all weekend finding speed in our car and right there we came in and made a pretty aggressive adjustment on that pit stop.  Trent (crew chief  Owens) changed a lot of stuff and just on that one lap of the restart it drove a lot better and I had my hopes up for a minute and then my hopes got crushed.

“Doug Yates (engine builder) and all the guys do an awesome job giving us great motors and this is just part of it.  Every once in a while something happens.”

For the Richard Petty Motor Sports driver, it’s his first engine failure since last fall at Chicagoland Speedway in the first race of the Chase for the Sprint Cup. Entering Pocono weekend, Almirola was 10th in the Sprint Cup point standings — just two points behind Jeff Gordon. After finishing 43rd, Almirola dropped to 14th in points.