Tonight’s win by Carl Edwards was his first All-Star Race win and the ninth overall for Ford Racing.

“Anytime you have grass on the windshield after the race it’s not good. I’ve got to thank Aflac. They are now hiring. If you didn’t notice, they’re hiring. It’s a great place to work. I thank Ford. Our Fusion was great. Kellogg’s, Scotts. Fortunately, I can have Scotts send some seed and grow some grass back. I had no clue that drain was there and I guess NASCAR is mad. They think we’re hiding something with that car, but that was a pretty big accident. Subway, the fans, and especially Sprint for putting this on. That’s a million dollars. We just won a million dollars. It’s unbelievable.”

I feel so bad about tearing up the car.

WHAT WAS THE KEY TO WINNING THIS RACE? “The key to winning this race are the guys behind me. One of them is Jody Fortson, who lost his father. I want to say hi to Sheila Fortson watching, but Bob Osborne and my guys, especially the guys on pit road. They could have dropped the ball. That was all the pressure in the world on those guys. They performed a flawless pit stop and we got out in front of Kyle. He is a bear on those restarts, so if we would have started behind him, I think it would have been really tough. It’s just unbelievable. I feel so bad about tearing up the car, but Bob says he’s got a faster one for next week, so I’m pretty excited.”

WHAT DID JACK SAY TO YOU? “He said I could come and work on that thing this week if I’d like to. I told him I would be busy. We’re running the Polaris Mustang up in Iowa. I’m pretty excited to see the fans up there in Iowa. It’s just unreal. It still hasn’t sunk in. This is the All-Star Race and we just won it.”

“I was really good in the beginning and then I was a little too loose and we tightened it up a little bit. I guess the track tightened up. I thought the track was gonna free up the cooler it got and the faster it got, but it didn’t. It tightened up, so on that last 10-lap deal I didn’t free it up enough. We had a really, really fast car, but I just wish I would have made a few more adjustments.”

DO YOU FEEL GOOD ABOUT NEXT WEEK? “I feel great about next week, I really do. We’ll run good for sure.”

“A top 10 and it was certainly a fun race. I felt like we had a car that could have contended for the win, it’s just all about that track position but everybody is trying to get that track position throughout the race. Our UPS We Love Logistics car did a nice job. We can’t complain. We got a top 10 and raced our way in, and I think you better watch out for the 6 car next week.”

WHAT DID YOU LEARN FOR NEXT WEEK? “We had to impound our car from practice and qualifying, whereas the All-Star guys had to work on their car a little bit, so I think we were at a little bit of a disadvantage off the get-go. We’ve got a few things that we want to look at next week, but all the Fords look very strong. It’s good to be driving a Ford Fusion and congrats to Carl. It doesn’t look like he’s gonna bring that car back next week.” 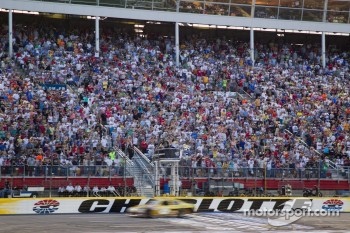 “Our car was tight. We were on used tires so it was tight and I just had to be committed to the high side. They got together or blew a tire down there and turned sideways in front of us. I thought I had the 32 below me because he had been running the bottom, so I just tried to get by it on the high side the best I could and ran out of room.” IT WAS A BIG HIT. THE SAFETY EQUIPMENT DID IT’S JOB? “Yeah, I bit my tongue and chipped my tooth, but, other than that I’m now worse for wear.”

WHAT WERE YOU THINKING ON THE RESTART WHEN YOU SAW WHAT TRANSPIRED? “I just spun the tires a little bit and I knew the guys with two rights would have a little bit better grip at the beginning, but kudos to Drew and our whole UPS team we love logistics car. It was good on the long run. We thought we may have some cautions there at the end and once Brad and I got out I knew that I probably had a little better car than he did, and I just tried to stay on the bottom. I would have been happy with second for a little while, but when we got that close, I said, ‘Hey, let’s go win this thing.’ But I feel like I just ran 600 miles, though, but I’ll have a drink of Coca-Cola and get ready for the next one.”

NOW YOU HAVE A SHOT AT THE BIG PRIZE. WHAT ABOUT THE NEXT RACE? “I think we saw the track did what we thought it would, it freed up a little bit and gained a lot of grip, so maybe that was a good test session for our UPS team. We made a few small adjustments, but we’ve got to go learn the rules for this All-Star Race. It’s all gonna be fun from here. Whatever happens from here on out is just gonna be a bonus. We’ve got a shot to win this next one.”

“It was great that Edsel Ford stood on my box. I’ve got Ford blood in my body, but that stings finishing third and chance for a million bucks to win the big race. We’ll take a lesson out of this and be better the next time. We were the fastest car at the end, so we learned a lot. We were just unlucky. We seemed to have the wrong starting lane each time and I just had to keep fighting back through spots. We got there, but not fast enough. It was a real shame for us.”

“It was a good effort by the Best Buy team. We’re a lot better on the mile and a half tracks than we used to be, but we just got pinned on the restart and ran out of time.”

“Our car was a little too tight, but we finished seventh and I’m proud of that. We beat some good cars and we qualified well. The car had good speed in qualifying, so I’m excited. We did learn some stuff, a little bit of what to do and what not to do, so that pit stop helped us. We came in and did some adjustments pit stop-wise, so that really helped us. We’ve got a direction for next week.”