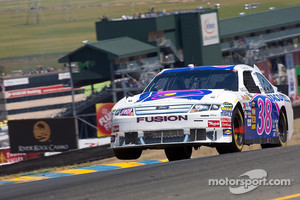 Statesville, N.C. (January 16, 2012) - Front Row Motorsports will follow up its best season in the team's young history by bolstering its line-up for 2012, adding race winner David Ragan to drive the No. 34 Ford Fusion in the NASCAR Sprint Cup Series. Front Row veteran David Gilliland will build off an impressive 2011 season, returning to the team behind the wheel of the team's second entry, the No. 38 Ford Fusion.

Ragan joins Front Row after completing a 2011 season that delivered his first Cup win (Daytona International Speedway in July), two poles, and four top-five and eight top-10 finishes. The 26-year-old Unadilla, Ga., native is already a NASCAR veteran, first joining the national stock-car ranks at the age of 18 and quickly ascending to premier-level Sprint Cup racing. His No. 34 team is locked in to the starting line-up entering the 2012 season, including a guaranteed starting spot in the prestigious Daytona 500 next month.

"Front Row has made great progress in the last few years, and I look forward to helping them advance to the next level," Ragan said. "I think the team appreciates what I can bring to the table, and I think it's a good opportunity for both of us. I've also enjoyed a long relationship with Ford and I'm glad that I'll get to keep working with them."

Gilliland returns for his third season with Front Row and his seventh in the Cup series. The 35-year-old Riverside, Calif., native will return to the No. 38, the number he drove as a Sprint Cup rookie as well as the car he drove in his first season with Front Row. The No. 38 team is also locked in to the field entering 2012. Last season, Gilliland raced his way to a third-place finish in the Daytona 500 to start off an impressive 2011 run, in which he proved to be a force on superspeedways and road courses.

"We've gotten better year to year and even week to week in the time I've been with Front Row, so I'm excited to be back for a third year and to have David (Ragan) as a teammate," Gilliland said. "It's good to be back in the '38' car, too. It was my dad's number, and I've also had some pretty good days at the racetrack with that number on the door."

Front Row Motorsports, which is owned by restaurant and transportation entrepreneur Bob Jenkins, enters its fourth full-time season in the Sprint Cup Series. The team turned in its best results in its young history in 2011, earning one top-5, two top-10, three top-15 and five top-20 finishes in 2011, including the history-best third at Daytona.

"I am committed to building a competitive race team by employing the same fundamental business principles that have worked for my other successful endeavors, and it all begins with the people," Jenkins said. "We took some pretty big steps in our race program last year and adding David Ragan is another giant step in the right direction.

"When you look at some of the large, storied teams in NASCAR that have been running for decades, we're still pretty young by comparison," Jenkins continued. "But I like the upgrades we're making and the improvements we're seeing, and I am confident we will be able to compete with them on a consistent basis in the not-too-distant future. Ragan is a proven competitor and race winner, Gilliland had a really solid season for us last year, Roush Yates engines are the best in the sport, and Ford continues to provide invaluable support, so I feel like 2012 is really going to be our year to step up to the next level. Plus, I now have two Davids to engage Goliath, and we know how that day ended."

Sponsorship for the Front Row Motorsports entries is being finalized and will be announced soon.

"We've worked hard to build an organization that can deliver compelling value propositions for our partners, and we can win immediately on that front given our size, efficiencies and cost structures," said Jerry Freeze, Front Row Motorsports' General Manager. "Fortunately, a few leading corporate partners have taken notice and others are conducting their due diligence. That's very encouraging and bodes well for our future."

Chase Elliott on Harvick contact: ‘I don’t care who he is’