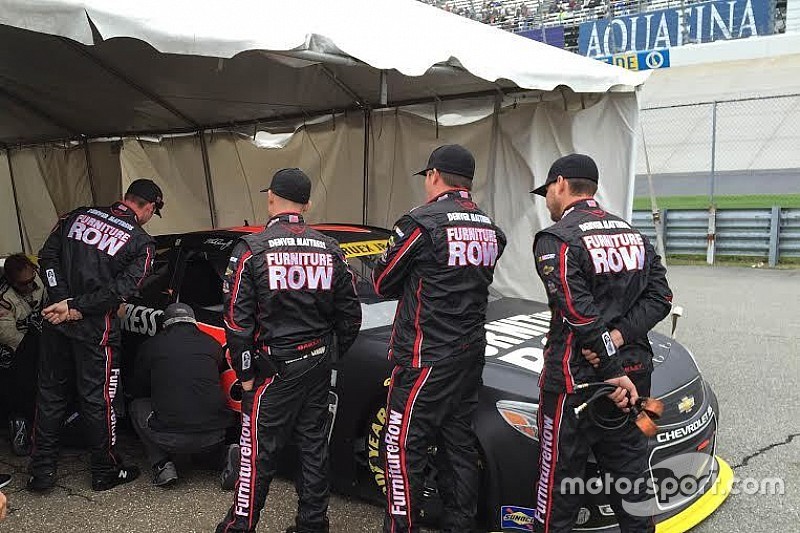 Crew chief Cole Pearn is on probation after the No. 78 team bends the rules -- and a wheel well -- before Sunday's AAA 400.

Cole Pearn, crew chief of the No. 78 Sprint Cup team, has been placed on probation until the end of the year.

Just prior to driver introductions for Sunday’s AAA 400, the No. 78 Furniture Row Racing Chevy was pulled off of the grid after NASCAR inspectors discovered the right rear wheel well was flared. The crew was forced to take the car to the Sprint Cup garage for further inspection and inevitably to make repairs to the car.

Driver Martin Truex Jr., who was originally lined up ninth after qualifying was rained out on Friday, dropped to the rear of the field for the start of the race.

At the time of the incident, the team and the media was told by NASCAR the penalty had been served. However, when the sanctioning body reviewed the case earlier this week, additional details led to the P2 decision.

On Tuesday, Truex said his confidence from racing at Dover — his home track — made the challenge of coming back in the pack less taxing.

If anything it made me more focused.

“I'm like, no worries, we'll be fine,” Truex said. “If anything it made me more focused.  I was kind of mad about it for a minute, and then I was like, you know what you've got to do, just go do it, and we did it, so it was good.”

Truex fought from 43rd to an 11th-place finish on Sunday. The 35-year-old Mayetta, New Jersey native is currently 10th after the standings were reseeded for the Contender Round of the Chase.

Truex is optimistic regarding his chances in the second round of NASCAR's playoffs. Earlier in the season when the tour visited the next three tracks on the schedule, Truex finished fifth at Charlotte Motor Speedway, ninth at Kansas Speedway and fifth at Talladega Superspeedway.

“To be honest I feel better about the second round than I did the first, just track‑wise and where we were going and the things we had going on,” Truex said. “I feel more confidence in the first two races of this round, just because of my past history at Kansas.

“I feel like any one of these next couple races I'm going to finally get that win there, so that's a really good feeling.  Charlotte, you know, in the first race, the best I've ever run there, led the most laps (131).  Really felt like we were in position to win it.  Didn't have the right fuel mileage or the fuel strategy I guess it was.  Kind of got snookered on that.

"But a lot of confidence going into those two racetracks, and luckily for us, we do, because Talladega is the third round, and that's obviously a crap shoot.”