Knockout qualifying at Martinsville was as entertaining as it was at Bristol.

Kyle Busch claimed his first NASCAR Sprint Cup Series pole at Martinsville (Va.) Speedway from behind the wheel of his No. 18 Joe Gibbs Racing Toyota on Friday with a 18.998-second lap during the second of two rounds of qualifying for Sunday's STP 500.

"What do you know. It's Martinsville and we're on the pole," Busch said. "There's a first time for everything, I guess."

Joe Gibbs Racing swept the front row, with Busch's JGR teammate and four-time Martinsville winner Denny Hamlin turning the second-fastest lap in round two in his No. 11 Toyota. Hamlin returns to action this weekend after missing the Marc 23 race at Auto Club Speedway in Fontana, Calif., because of a vision problem.

Joey Logano qualified third in the No. 22 Team Penske Ford, while Hendrick Motorsports teammates Jimmie Johnson in the No. 48 Chevrolet and Jeff Gordon in the No. 24 Chevy rounded out the top-five in round two of qualifying. 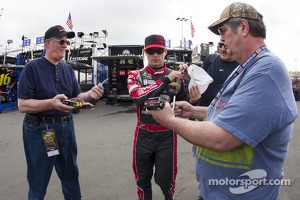 Logano was fastest in round one, setting a new track qualifying record with a time of 18.898 seconds in the round. He, Hamlin and Busch all surpassed the previous record, held by Hamlin, in the first 30-minute round.

"I feel like our Shell/Pennzoil Ford has speed in it, obviously," Logano said. "The guys were telling me that's our sixth segment we've won in qualifying here, and we only have one pole, so I'm winning the wrong ones, and it's really frustrating me."

Brad Keselowski, who started on the front row for all four races for which NASCAR's new qualifying format has been used, failed to advance to the second round to make a qualifying attempt for a top-12 start for his No. 2 Team Penske Ford. Instead, he was 14th in the first round and will start the race from that position.

David Reutimann, driver of the No. 35 Front Row Motorsports Ford, was the lone driver who failed to make the race. He and Landon Cassill, driver of the No. 40 Hillman Racing/Circle Sport Chevrolet, tied on lap times in round one, but Cassill won out and got the final entry into the race by an owner points tie breaker.

Untold story: When Schumacher met Villeneuve in the bar after Jerez '97