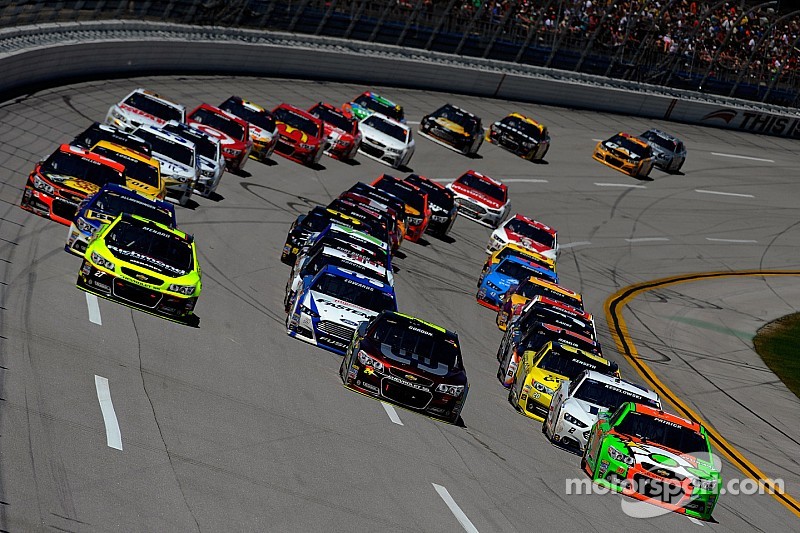 Some embraced certain aspects of the package, others still have questions.

The current proposal initially calls for tapered spacers to limit Cup engines to 725 horsepower on all tracks except superspeedways. The Nationwide cars use a smaller spacer and produce approximately 50 hp less.

After multiple tests at Charlotte and Michigan, many agree that reducing downforce from the cars is beneficial. However, some drivers and fans feel that losing horsepower will not enhance the racing.

Put it to the test

After the Michigan test on Aug. 18, Brian Vickers preferred the low downforce, high horsepower package that NASCAR used on the cars. Vickers said with that particular setup, drivers were sliding, braking and he “had to drive” the car rather than hold the throttle wide open as the drivers do with the current package at Michigan, where 32 of 43 drivers posted qualifying laps of over 200mph.

I would give us even softer tires, even less downforce and more motor.

“As a driver it was fun, personally, I would go even further,” Vickers said. “I would give us even softer tires, even less downforce and more motor. That’s just my opinion and based on what I felt, what I saw and what I enjoy doing.

“I grew up racing where you had to lift, brake and drive the (crap) out of that thing and that’s what you had to do with that package. Ultimately, the fastest car is going to get in the lead and make some distance. The second fastest car is going to be in second and so on and so forth. That’s racing. That’s that way it’s supposed to be. I think to a certain extent sometimes we’re chasing an unattainable goal to make it better but yet it’s the best it’s ever been.”

Time and again, NASCAR’s truck series has set the bar for competition. Vickers believes people feel the perception is “truck racing is amazing because they have no horsepower and high down force.” He felt the teams ruled out that combination during the test.

“I think we proved that it was not the answer,” Vickers said. “I think the disparity and experience of the drivers, the disparity of the teams and the funding and all that stuff creates the kind of racing you see in that series.

The engine shops are free to work on those engines and if you get an advantage, you get to keep that advantage.

“They don’t test the engines to make sure they make a certain amount of power,” Yates said. “The engine shops are free to work on those engines and if you get an advantage, you get to keep that advantage.  I think that’s something that may sound a little obvious, but it has come up and we need to make sure that’s understood by our fans.”

Yates, who started working on cars for his father at Robert Yates Racing while still in school, believes there’s “a lot of work ahead” for everyone including engine builders because the configuration of the engine will change considerably starting with a different camshaft.

“They’re going from flat tappet to roller lifter, which is a step in the right direction for longevity, but as far as the cam design, the cylinder head, intake manifold and exhaust system – all of those things that are related to air-flow – is going to have to be developed and tested over the winter to have a package that’s ready to go race next March in Atlanta,” Yates said.

“At the same time, they’re reducing the horsepower target 125 and they’re also reducing the RPM from 9,500 today to 9,000 RPM going forward, so there are a lot of changes and a lot of work ahead."

And despite the use of tapered spacers and horsepower reduction, Gene Stefanyshyn, NASCAR Vice President of innovation and racing development, says fans won't notice a significant difference in speed on the track.

We look for more passing and closer competition.

"When we pulled some of the power out and took the spoiler down (from eight to six inches), we also took quite a bit of drag off the car," Stefanyshyn told SiriusXM NASCAR Radio. "So essentially, the speed reduction won't be as great as people think.

"For example, if we look at Michigan International Speedway, we were somewhere in the order of 210-208 miles an hourat the end of the straightaway. We'll probably be in the neighborhood of 207-205. So it is a package which is a system - the horsepower with the aerodynamis is a system - so it's been treated in that manner.

"The ultimate objective of this is to create better racing for our fans. We look for more passing and closer competition."

Yates applauds NASCAR's spirit of cooperation with the engine builders. Although a new engine is coming in the next couple of years, Yates says 2015's power plant is “not a total tear-up by any means".

We as a sport have made a good decision and a good cost-effective decision going forward for the engine shops and the teams and the sport.

"Gene Stefanyshyn and the guys at NASCAR have done a good job of talking to the engine builders and trying to get our input and feedback on how we would like to go about and that process went through many different ways of reducing power, " Yates said. "But at the end of the day I think we as a sport have made a good decision and a good cost-effective decision going forward for the engine shops and the teams and the sport.

"There are a lot of ways you can do it, but this makes sense for the current engine we have today.”

The new engine package is slated to make its debut at Atlanta Motor Speedway on March 1. NASCAR pushed to expedite the new rules so engine builders would have ample time to prepare.

“There’s never enough time and we would work as hard as possible no matter when they told us, so I think NASCAR is trying to do a better job of getting the rules out,” Yates said. “They targeted September and we’re here, and now it’s time to go to work.

"At the end of the day, no matter what the target power level is it’s our job to try to find an advantage and make more power than the next guy and the next organization.  That’s the challenge ahead and we’re excited about it.”

As the son of one of the sport’s premier engine builders, Yates has heard the “less power, smaller engine and more production-based engines” argument from his father for some time. Robert Yates was one of the first to embrace a green initiative when it comes to engine production.

“I would say he was ahead of his time on this one for sure,” Yates said. “For an engine builder to talk about less power isn’t a very popular subject.  It’s our job to continue to make more.  We love more and more power, but at the end of the day this is a competition and it’s a sport and it’s probably not wise for these cars to be running around at some of the speeds we are at the tracks we’re running.

“So I think in order to make a step forward for the sport this is one of the moves that (Chairman) Brian France and NASCAR feel is a step in the right direction and we’ll see how it goes.  It’s time to go to work now and we’ll see.  I think this year has been really great from a competition standpoint, so the guys are doing some really good things.  This is the next phase for NASCAR and we’re on board.”