This year's seminar featured some new sessions, with the goal of more fully preparing rookies for the experiences to come.

DAYTONA BEACH, Fla. – There's much more to racing these days than, well, racing. That was the overall message delivered to 66 eager young drivers Wednesday at the 2014 NASCAR Rookie Seminar. 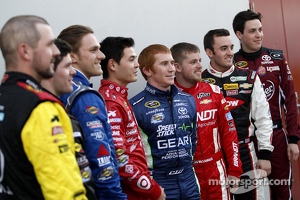 Call those 66 the "Great American Rookie Class." It sure looked like that, with the seminar taking place adjacent to Daytona International Speedway's Victory Lane where on Sunday, the winner of the Great American Race, the Daytona 500, will celebrate winning stock car racing's biggest race.

This year's seminar featured some new sessions, with the goal of more fully preparing rookies for the experiences to come. NASCAR President Mike Helton set the tone with a brief opening address to the audience that represented NASCAR's three national series plus its touring and weekly series levels.

"After 65 years [of NASCAR] we've had 65 years' worth of rookies and along the way they all progressed as drivers, winners, champions, and sometimes landed as car owners in their later years," Helton said. "Through the cycle of our history, they've all blazed a trail for each of you to have this opportunity.

"[This seminar] introduces you to a lot of faces inside of NASCAR and also to some of the programs that, over the years, we've learned are valuable not only to you and your career advancement but also to the sport itself. We're not going to tell you how to drive the car but we will introduce you to a lot of things we believe are very critical for your improvement as a pro athlete, a representative of motorsports and a representative of NASCAR. We want to help you. The more successful you are, there's more responsibility that comes along with it. "

Helton had in effect teed up an all-star cast of speakers who supplied a mixture of motivation and education over a five-hour span featuring six sessions:

• Steve Shenbaum from "game on," a communication, leadership, character development, and media training firm. The high-energy Shenbaum focused on drivers maximizing their appeal to fans, media and sponsors;

• Kenny Mitchell, NASCAR's new managing director of brand and consumer, speaking on the subject of drivers building their individual brands;

Bobo's presentation certainly got the rookies' attention, as he provided the ultimate cautionary tale of professional sports and abuse: Len Bias, the Boston Celtics' No. 2 pick in the 1986 NBA draft, a young man with a stellar reputation who, 48 hours after that selection, died from a cocaine overdose.

The message Bobo conveyed was that drug testing in sports since then has not been a reaction to Bias' death – but a rational response.

"Drug testing protects athletes from the worst of human instincts, [and also protects] the teams' investment in them and the integrity of their sport. ... We want to keep you safe and the people racing next to you safe."

Dillon is a Sunoco Rookie of the Year candidate in the NASCAR Sprint Cup Series who has spent the last couple of months spending an inordinate amount of time with the media. In the offseason it was announced that the iconic No. 3 would return to Sprint Cup – with Dillon driving – for the first time since Dale Earnhardt's February 2001 death. Then, this past Sunday he took the 500 pole.

Dillon provided his peers with some plain-talk advice, saying tough media questions should be dealt with in a forthright manner.

"Answer with the best answer you can," Dillon said.

He said that in recent weeks, on the advice of his car owner and grandfather Richard Childress, he took every media opportunity offered, to publicize the return of the No. 3.

"I think this [seminar] is great," Dillon said. "These [rookies] are the guys that matter [for the future]. Hopefully something like today can help grow our sport."

Kyle Larson, another Sprint Cup rookie who will drive for owner Chip Ganassi, was experiencing his third rookie seminar. He called this one the best, based on the content lineup.

"It's good that NASCAR has this and reaches out to the guys who are not on the 'big stage' yet," Larson said. "This is a good for us – and good for NASCAR."