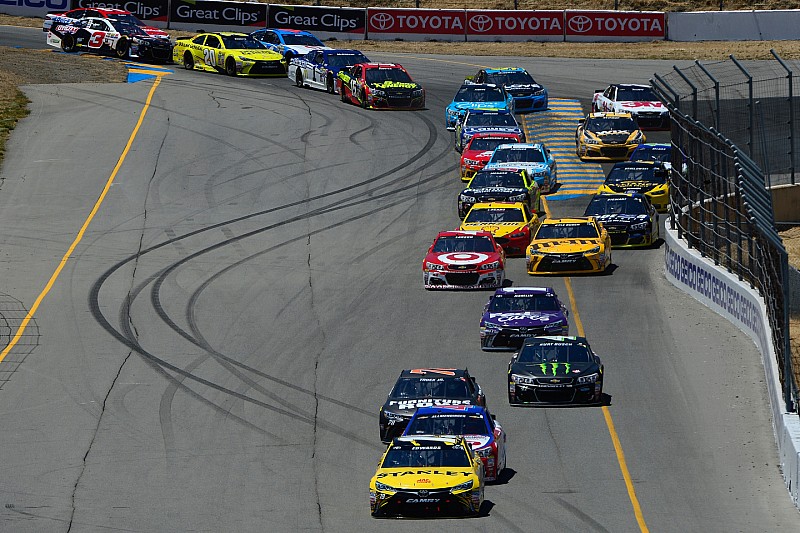 F1 drivers have been split on the issue of track limits - some have spoken out in favour of a "zero tolerance" policy of penalising those who go beyond the white lines of the track, while others advocated for a relaxation of the rules.

Grosjean appears to be firmly in the latter camp, the Frenchman suggesting the right approach to track limits enforcement can be seen in NASCAR's road course races.

"I like the liberty, the freedom of going wide, I think it looks great over the kerbs," said the Frenchman, who has previously expressed a desire to run a one-off NASCAR Sprint Cup race on a road course.

"I watched the NASCAR race in Sonoma, the track limits... I don't know why they paint the white line. But they [the cars] look great, and everyone is doing the same.

"In the end, it's sometimes more risky, because you go on the kerb, on a surface that's less smooth, so I'm quite in favour of letting a car run wide."

Track limits enforcement was a major point of contention in the German Grand Prix, with the teams pushing for freedom to run wide and F1's race director Charlie Whiting arguing against it.

Asked whether not policing Turn 1 would eliminate the challenge of the corner, allowing drivers to go through it flat-out, Grosjean said: "That would require big bollocks.

"Maybe next year, with the cars four to six seconds faster, but I think the first corner is very tricky. You want to go wide, but there's a great kerb, there's a DRS zone in the same place.

"I think it makes sense [to allow running wide], it's quite fun. You don't want to see the car going completely wide, but a little bit on the kerb, with sparks and so on, is fine."