From being rumored to lose his ride, Hamlin now a title favorite

There are several good candidates for most improved driver in the NASCAR Cup Series this season but it’s hard to overcome Denny Hamlin’s resume. 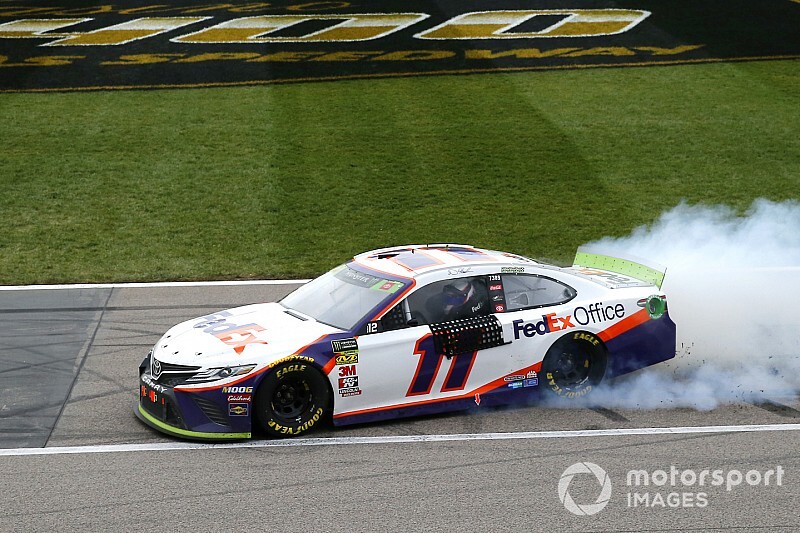 No other driver has gone from championship afterthought in February to championship favorite with four of 36 races remaining.

Hamlin entered the 2019 season coming off his first winless season in what was at the time a 13-year fulltime career. His No. 11 Joe Gibbs Racing Toyota team made another crew chief change with the addition of Chris Gabehart in the offseason.

I think clearly he’s shown the ability throughout his career to elevate.

Not to mention, rumors were swirling Hamlin’s job could be in jeopardy with upstart Christopher Bell patiently waiting for a move from the Xfinity to the Cup series in 2020.

Stepping up their game

But instead of washing out, Hamlin and his team stepped up, beginning the year by winning the season’s biggest race – the Daytona 500.

Gibbs’ son, J.D., died Jan. 12 at the age of 49 from complications following a long battle with a degenerative neurological disease. He had been a co-founder and co-chairman of JGR and instrumental in the hiring of Hamlin.

“I don’t think that was something that just happened,” Joe Gibbs said of the 500 victory. “I think God really was a part of that weekend. We started there.”

Hamlin followed the Daytona win with a victory at Texas in March in a race where he overcame two pit road penalties. Late in the summer, Hamlin put together a run of six consecutive top-five finishes that included wins at Pocono and Bristol.

He earned his first win in the playoffs last weekend at Kansas – sending him into the semifinal round on a wave of momentum with a trio of tracks ahead – Martinsville, Texas and Phoenix – on which he performs well.

Gabehart says he has seen Hamlin rise to the occasion throughout his career and especially this season, to give himself a solid opportunity at his first series title at age 38.

“I think clearly he’s shown the ability throughout his career to elevate. I think that’s the difference between a good driver and a great driver, just like any athlete, is the ability to elevate when the pressure is on,” Gabehart said.

“Now he has the experience of the good days and the bad days, the good years and the bad years. He’s just on it right now. I mean, this race team shows up to win every week. We’re disappointed if we don’t, quite frankly.”

While this season may be one of Hamlin’s last, best chances at an elusive Cup series title, he refuses to consider the 2019 a success or failure based on the outcome of the championship hunt.

“I think we believe that a successful year is making it to Homestead. Anything can happen in one race,” Hamlin said.

“But we are not going to let one race dictate whether this year is a success or not.”

Title or no, Hamlin has shown this season will be far from his last.

eNASCAR Heat Pro League title to be decided this week