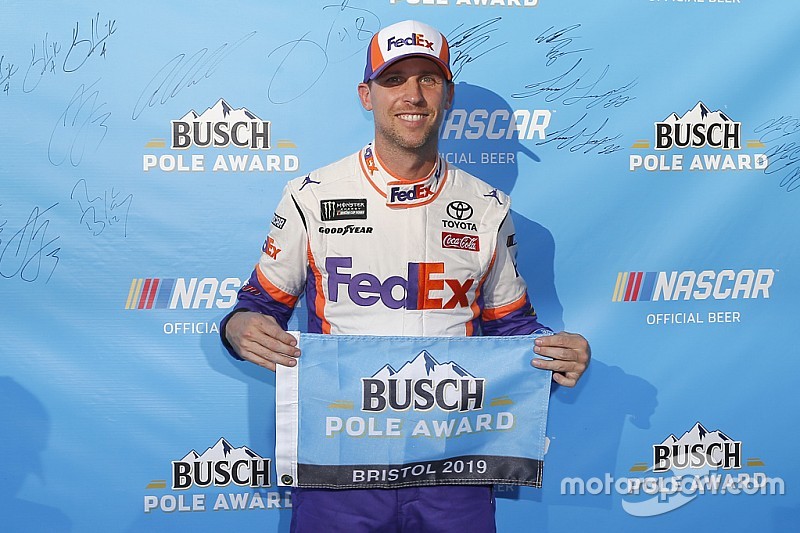 As difficult as it may be to believe, Denny Hamlin on Friday provided Toyota its first pole of the season in the Monster Energy NASCAR Cup Series.

The pole is the first for Hamlin this season and remarkably the first for a Toyota driver, although they have won 11 of the season’s first 23 races.

It’s also the 31st of Hamlin’s career and fourth at Bristol.

Asked if he could believe this was Toyota’s first pole of 2019, Hamlin said, “Yeah, I can believe it. I’ve lived it. I’m proud of this whole team for giving me such a great car. The guys are on it right now – it’s just unbelievable with what they’re doing with these race cars.

“I’m just trying to learn every week, doing everything I can to get better and the results are showing it.”

Entering Saturday night’s race, Hamlin has three wins this season and has finished fifth or better in the last five races. He started fifth and finished fifth in the spring Bristol race.

“The 2010 season is really when I can remember it being as consistently good. It’s week-to-week though, you’re only as good as your last race,” Hamlin said. “We sure don’t want to stink it up when we go out here tomorrow night but we have a great starting spot.

“We need to go out there, set the pace and get this thing in Victory Lane.”

Chase Briscoe moves to Cup, will drive No. 14 at SHR