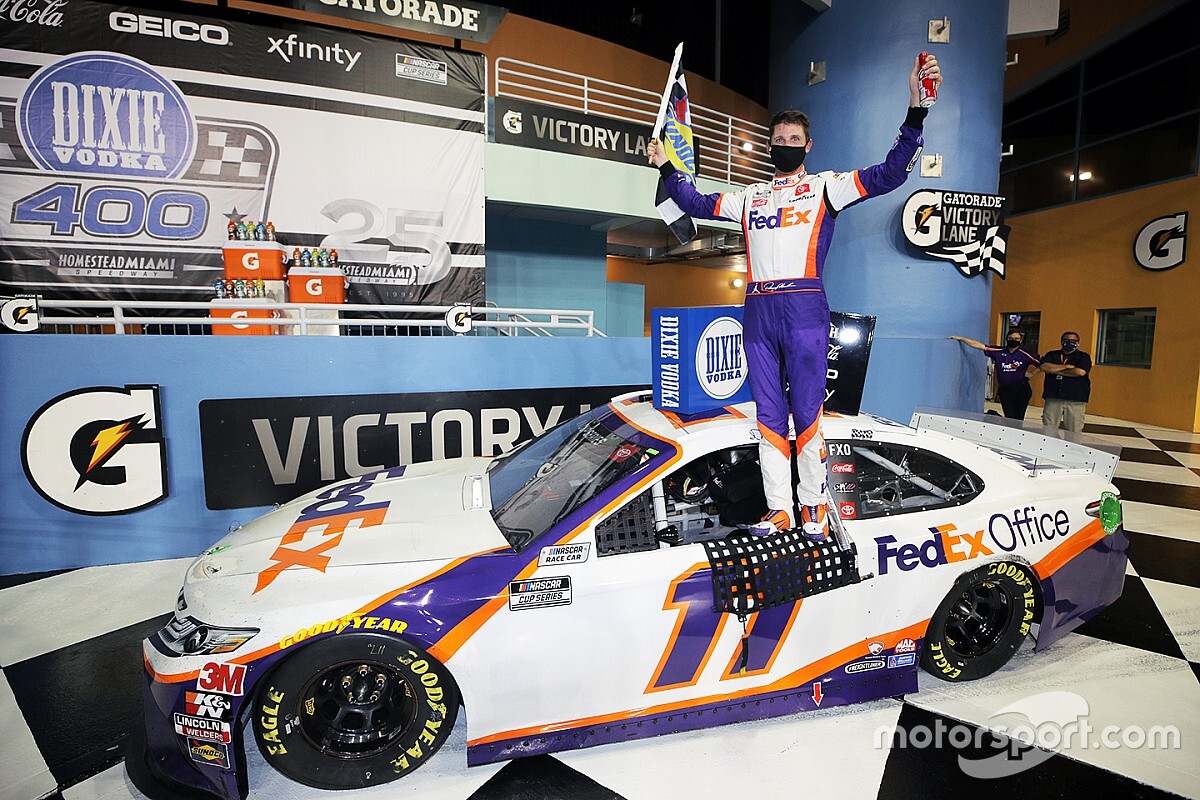 Denny Hamlin won the Dixie Vodka 400, the first race to take place in front of fans since the coronavirus pandemic halted the sport in mid-March, but was aided by Joey Logano appearing to hold up Chase Elliott while he was battling with Hamlin for the win.

A delayed start due to a brief rain shower and two red flags, for multiple lightning strikes nearby the Homestead-Miami Speedway, delayed the opening stage by several hours. But the weather relented from there and the race ran as planned to the finish.

Hamlin led from the green of the final stage, as Elliott and Reddick battled for second. The sixth caution of the day quickly flew due to Joey Logano suffering a huge slide at Turn 1 and Ryan Newman couldn’t avoid clipping him.

Hamlin led again, with Blaney taking second ahead of Elliott, Reddick and Byron. If Hamlin had a slight weakness, it was his fire-off speed from restarts but this time he proved untouchable from the off. Blaney, Elliott and Reddick battled for best of the rest, chased by Almirola and Byron.

Blaney took the fight to Hamlin and dived inside him at Turn 1 with 74 laps to go, and they swapped the lead back and forth in stunning style. Elliott took advantage of this to grab second from Blaney as he got sideways off Turn 4 and lost momentum.

Elliott was half a second behind Hamlin when he pitted under green on Lap 217, attempting the undercut to gain track position. Hamlin, who attempted to cover him but missed the pit entrance, came in on the next lap, and Elliott swept into the lead by 1.5s.

Elliott complained his car’s handling was tight, and Hamlin carved into his lead by two-tenths per lap as his prodigious long-run speed kicked in. Not for the first time tonight, Logano – who felt aggrieved with Elliott over what happened at Bristol – got in Chase’s way as he tried to lap him, and Hamlin passed Elliott for the lead as he lost momentum with 29 laps to go.

Elliott tried everything to fight back, as lightning flashed in the distance, with Blaney and Reddick also pushing hard to close up as the race entered its final 20 laps.

The top four was covered by 1.5s with 10 laps remaining, with Reddick and Blaney swapping third place. Elliott pounded the Turn 3 wall with five laps to go as he threw caution to the wind, and Blaney almost pounced for second by almost wrecked on the exit of Turn 2 and had to settle for third.

Reddick was a career-best fourth – despite slowing on the white flag lap thinking the race had finished! – ahead of Almirola, Kyle Busch and Austin Dillon.

After the race, Elliott stonewalled questions on Logano's antics, twice saying: “I just need to get through lapped traffic better.”

Hamlin won the second stage, using his long-run strength in a caution-free run and an undercut pit strategy to ensure he saw off all rivals. He led the second stage from the green, ahead of Elliott, Blaney, Bowman and Reddick.

Elliott grabbed the lead from Hamlin on Lap 88 with Blaney following him past. Blaney then blew past Elliott to hit the front 10 laps in, with Hamlin, Reddick and Byron also passing Elliott, who dropped down to seventh.

Hamlin pitted a lap before leader Blaney in the green flag pitstop sequence, which gave him the advantage as they rejoined. Reddick held third, ahead of Byron and Elliott.

Elliott rallied to repass Byron for fourth, despite a lapped Logano almost shoving him into the wall near the end, while Bowman won the battle for sixth.

Blaney and Reddick dueled mightily over second, which allowed Elliott to close in. Reddick cleared Blaney with eight laps to go, and Blaney almost wrecked as he drilled him from behind.

Elliott also passed Blaney to finish third, as Hamlin won the stage with ease. Byron finished fifth, ahead of Bowman and Truex.

Hamlin won the first stage following a thrilling duel with Blaney, after the race got off to a red flag-punctuated beginning.

Logano took the lead from the inside of the front row, ahead of Keselowski initially until poleman Hamlin re-passed him just before the caution flag flew on lap four as rain sprinkled and lightning struck repeatedly in the vicinity. The red flag soon followed.

Over two hours later, and several passing electrical storms that didn’t actually produce any rain on the racetrack, Logano and Hamlin again brought the field to the green on Lap 9. It took a lap for Logano to establish himself out front, while Keselowski passed Truex and Hamlin to make it a Penske 1-2 before the yellow flag flew on Lap 20 for Ryan Newman, who cut a right-rear tire. NASCAR declared this the competition caution, which was originally scheduled for Lap 25.

Logano won the race out of the pits, rejoining ahead of Harvick, Reddick and Hamlin, as Keslowski dropped back to ninth with an airgun problem. Logano held sway at the restart, as Elliott passed Reddick for second. Elliott hit the front on lap 30, as Reddick demoted Logano to third. The third caution came out on Lap 32 due to another lightning strike within 10 miles of the venue, and the red flag flew again.

The pitstops before the restart were chaotic, with the whole field pitting together. Logano went into the back of Quin Houff as Kurt Busch pulled out in front of him, with Harvick and DiBenedetto also picked up damage that required an extra pitstop. Logano dropped to 11th and he wouldn’t be a factor from that point due to front-end damage.

Elliott led the restart, under pressure from Blaney, who powered ahead on Lap 38. Hamlin took second from Elliott on Lap 45.

Reddick passed Elliott for third, and best-placed Chevy, on Lap 52 after an intense duel.

Hamlin chased down Blaney and began to attack him with 13 laps of the stage remaining. Blaney clung doggedly to his lead, but Hamlin made a decisive dive inside him at Turn 1 with five to go. Blaney’s attempt to get the position back saw him slew sideways in Turn 4.

Hamlin won the stage from Blaney, Reddick, Elliott and Almirola.