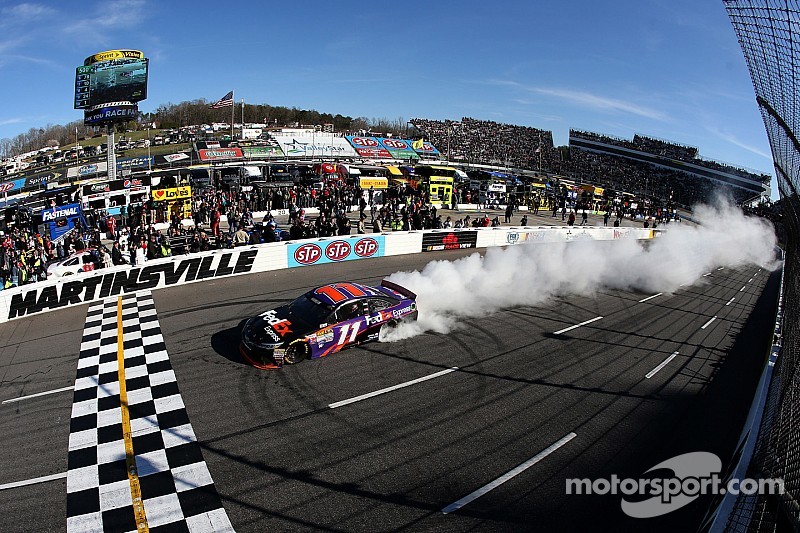 A wild and unpredictable short track race at the historic Martinsville circuit was decided by a matter of tenths, Denny Hamlin taking the win over last week's race winner Brad Keselowski.

"We were right there," Keselowski said. "I tapped him just a little bit. I think we were a little faster than him, there, but I just could get under him and get past him."

Who's going to win it?

The complexion of the race ended many times in the final 50 laps. Jeff Gordon looked like he might collect yet another grandfather clock until a heartbreaking speeding penalty sent him to the rear for a restart.

Tony Stewart stayed out but was overtaken by Matt Kenseth with just 30 laps left. A few laps later, Denny Hamlin made a move to displace his JGR teammate.

"We just couldn't go on that short run and kept falling back," Kenseth said.

We had a very fast car but, obviously, some pit road issues, but we overcame it

Hamlin spent the rest of the race stalked by the Penske duo and as the checkered flag neared, Keselowski started looking to the outside of the Toyota and using the bumper.

In the final corner, Hamlin was shoved out of the turn in a four wheel slide, but he held onto it to take his fifth victory at Martinsville and the 25th of his career.

"We had a very fast car but, obviously, some pit road issues, but we overcame it," Hamlin said. "I tried (to manipulate his restarting position), but sometimes it messes you up with penalties. It worked out for us the last time, though."

Logano's misses out on weekend sweep

Logano led 108 laps before spinning as a result of an incident with Michael Annett that brought out the ninth of 16 cautions on lap 220. After restarting in the back, Logano was in the top-five by a restart with 61 laps to go. He missed out on the weekend sweep after winning Saturday's Truck race.

"We obviously had a good start to the race, leading a lot of laps," Logano said. "Just didn't have enough for those last two cars at the end."

Harvick led a race-high 154 laps by the time he lost the lead to Hamlin on lap 398. Harvick lost additional spots in the final 100 laps and wound up eighth at the finish, ending his string of consecutive top-two finishes at eighth.

Best of the rest

With a little luck, Danica Patrick survives carnage and finishes seventh at Martinsville