Hamlin: "I don't think I could have done a better job"

Denny Hamlin's pursuit for that elusive Cup title will continue into the 2020 season. 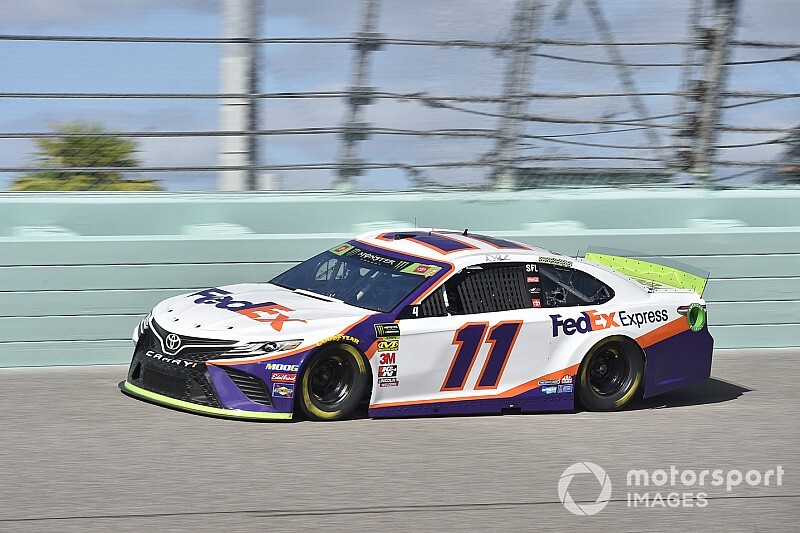 After an unscheduled pit stop, he would finish tenth, last among the four contenders.

"I don't know. It's tough to say," said Hamlin when asked if this is his toughest title loss yet. "I feel like I did all I could, so probably not. I mean, I don't think I could have done a better job. I don't think I could have ‑‑ I didn't leave anything out there. So for the first half of the race we just weren't fast enough, we weren't handling very good, and all of a sudden it went nighttime and we took off, and suddenly I perked up and got a little more and was thinking that we've got a chance.

"Then just didn't work out. Definitely, like I said, last week, I was going to come in here and do the best I could and live with the result either way. I definitely feel like I couldn't have done anything different.  Certainly we got a little aggressive there, and it cost us, but I mean, he's also been really aggressive and won us races, too.  It's just he's going for it. He saw an opportunity there to really add some speed to the car, and it just didn't work out."

Hamlin was running second to eventual race winner and champion Kyle Busch when the No. 11 started to push water and he was forced back down pit road under green.

"Obviously if you have to come back down pit road, it's pretty much over. But even ‑‑ I think we had nailed ‑‑ with the other two guys running long on their strategy, we were going to be second no matter what, and just a stone's throw from the 18.  So a caution could come out, we've got the No. 1 pit stall.  We can beat them off pit lane. There's always an opportunity until the checkered falls, anything can happen.

"I don't think it's a do‑or‑die moment, but I think it was an opportunity that Chris saw to ‑‑ we came one lap earlier, we wanted to catch everyone off guard there. We did it. I didn't get to pit road clean because the 34 kind of was coming off pit road and I had to check up. It didn't matter because we added too much tape anyway.  But he just ‑‑ he was going for it, and I don't fault him for that because I've gotten really fast cars because he goes for it every single week."

Despite Sunday's defeat, Hamlin still has plenty to smile about after a season that saw him win six races including the Daytona 500.

"Yeah, I told you at the beginning of the week we're going to celebrate our year. Our year was fantastic in every way you can think of, and it just didn't pan out in one race in our favor.  You know, I don't know about those guys. I talked to them briefly before the race, but I don't know, I just ‑‑ right now just got to gather all the thoughts and think about everything."

Truex: "One mistake probably cost us a shot at it"