Hamlin: "I don’t even care about the playoffs" after Indy loss 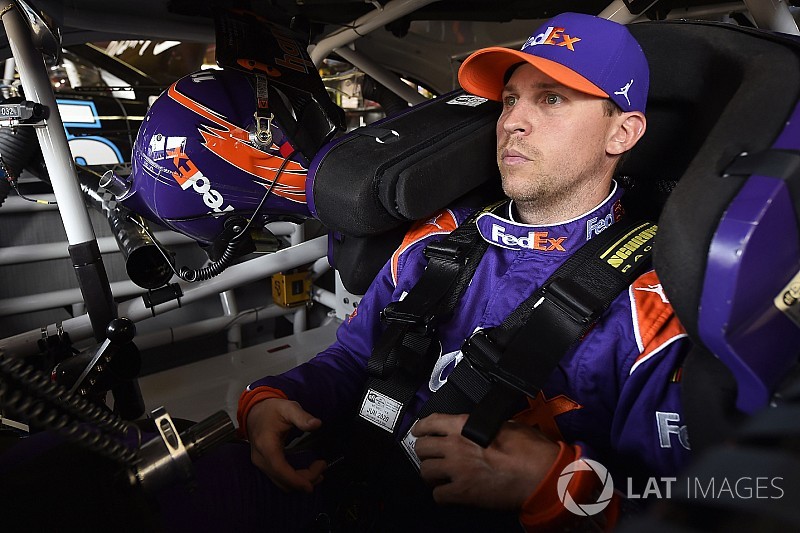 Denny Hamlin will have to put the disappointment of coming up short at the Brickyard behind him if he and his Joe Gibbs Racing team hope to contend for the 2018 Monster Energy NASCAR Cup Series championship.

The Chesterfield, Va. native has gone deeper into a season without a victory but Monday’s loss in the Big Machine Vodka 400 stung a little more than others.

“I don’t even care about the playoffs at this moment,” Hamlin, 37, said after finishing third in the rain-delayed race at legendary Indianapolis Motor Speedway. “All I care about is not winning this race.

“It’s one that was big on my list of races I wanted to win and the team gave me the car that was certainly capable of doing that today.”

His crew was “flawless on pit lane,” he said. “The strategy was good, had a fast car, just circumstances. Cautions. Cautions killed us at the end and allowed those guys to come up there.”

“Those guys” would be Brad Keselowski and the No. 2 team of Team Penske. Keselowski wrestled the lead away from Hamlin following a lap-158 restart and pulled away for the victory, the first in the Cup series for team owner Roger Penske and the second in a row for Keselowski, who also won last week in Darlington, S.C.

Luck of the yellows

He isn’t the first to blame late cautions for taking away a potential victory and he won’t be the last. He’ll just deal with such incidents much like everyone else and move on. Late-race yellows? They’re nearly as certain as death and taxes.

Less than 20 laps from the finish, it seemed as if Hamlin would add yet another crown jewel to a racing resume that already included wins in the Daytona 500 and Southern 500. With 31 victories, there aren’t many places he hasn’t found victory lane. But Indy is one of the few and it’s a big one.

It took pit strategy and a fast race car to put him out front but at the time, that seemed to be enough.

A caution for debris on lap 144 of the 160-lap race drew the field back together, but Hamlin left everyone in the dust with a textbook restart.

Barely 10 laps later, and only five laps from the checkered flag, a 10th and final caution flag appeared, this time for a wreck between Jeffrey Earnhardt and Landon Cassill.

It was the break Keselowski, who had fresher tires, needed and the one Hamlin dreaded.

Bowyer, second on the restart, spun his tires. Keselowski, restarting behind Hamlin, quickly worked his way underneath the JGR driver and the two ran practically side-by-side for the next lap, trading paint, before Keselowski took the top spot.

Hamlin’s most recent victory came in the Southern 500 of 2017, so it’s been more than a year. He heads into this week’s playoffs seeded 13th in the 16-team playoff field. A win would have been a huge boost to the team that’s been so strong at times but so average at others.

“I don’t know what they were doing crashing with a couple of laps to go and multiple laps down,” Hamlin said of the Earnhardt/Cassill incident. “Meaningless.

“Besides that, all those cautions allowed those guys who took tires … to come back up there and obviously allowed the 2 (of Keselowski) to kind of rough us up there at the end.

Beleaguered Truex to “come out swinging” in Vegas after Indy DNF