Denny Hamlin wheeled his way to his first NASCAR Nextel Cup Series pole at Phoenix International Raceway. Hamlin's lap of 134.173 bested the field by nearly one mile-per-hour in the No. 11 Joe Gibbs Racing Chevrolet. 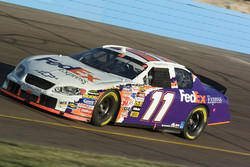 Denny Hamlin.
Photo by Kurt Dahlstrom.
"It helps being in this Gibbs equipment, these guys are putting great equipment under me," said Hamlin who will take his sixth career start on Sunday. "It was a good qualifying effort."

"I can't believe it. I came so far. I have got to thank my family and everyone who helped me get here. This is a great accomplishment. I have been given a great opportunity at Joe Gibbs Racing," continued Hamlin. "One year ago I was racing a late model race at South Boston Speedway this weekend. This is too hard to believe. I just can't believe it."

Jimmie Johnson will start on the outside pole with a lap of 133.506 mph. Johnson currently sits second in championship points, trailing leader Tony Stewart by 38 markers.

"It's go time," said Johnson. "We gained a couple of points last week on the #20. It's really about doing everything we can. We've got to finish ahead of them. It's still in our control and we've got to go out there and race as hard as we can for the next two weeks. And the #99 out there-he's coming on strong."

Carl Edwards is still riding high off his back-to-back wins at Atlanta and Texas; he will start the No. 99 Ford second after posting a lap of 133.457 mph.

"That was close," Edwards said. "You make decisions in the race car and that first lap was fast enough. The car felt good enough and I thought, 'You know what, I could drive this thing like I did that Busch car, but I might not get away with it twice in one day,' so I went into three and I probably left a half-tenth on the table. I don't know. We're thinking championship, but I never thought I'd be that guy that would take it easy in qualifying.

"I'm learning. We've got two races to go. We already have a pole. I owe it to the guys to do everything I can, but I was worried I'd go in there free enough. I thought, 'If I go charge this thing in there and then back it into the fence, I'm gonna be the biggest idiot out here.' So we'll take it."

"I've got to be happy with that," said Biffle. "That gets us up front. Hopefully that will be a top-10 starting spot but there are still a lot of guys left to go. I just missed it by an ounce. I wish I would have put the throttle down a second sooner or done something a little different to get the 48 car. It's probably gonna heat up. I think that second may hold up, but we'll see. I was really wanting to get in the Bud Shootout. I haven't been able to get in the Bud Shootout yet and it was so close. Coming to the start-finish line I thought I had it for sure and thought it was gonna be a good 26-second lap, but not quite."

Ryan Newman qualified 11th , but crashed his primary race car during final practice for Cup teams on Friday which will force him to start the No. 12 Dodge at the rear of the field.