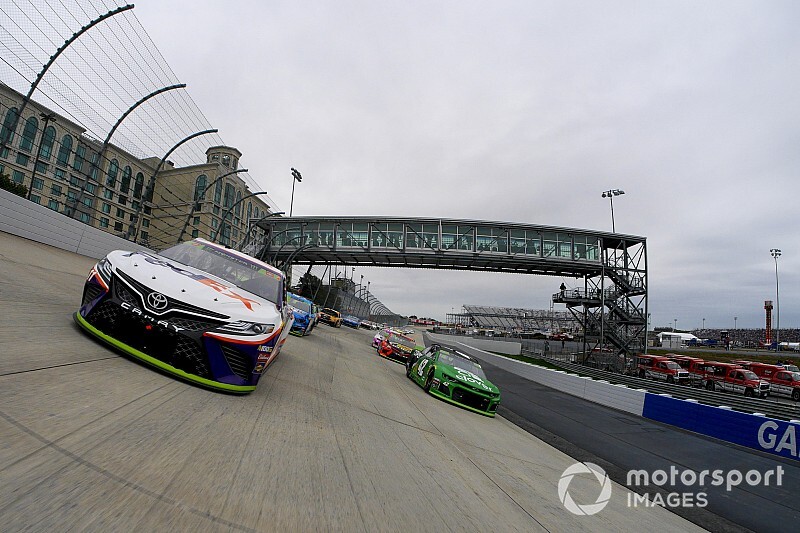 Denny Hamlin looked like a strong contender for a win Sunday at Dover but a lapped car and a quirky engine issue sidelined his charge.

The lapped car – the No. 22 of Joey Logano – weighed on his mind far more than anything else, however.

Hamlin started on the pole and dominated on his way to the Stage 1 win, definitely looking like he had the car to beat in the Drydene 400.

He appeared well on his way to a victory in Stage 2 as well until Logano – who was running 24 laps off the pace due to a pre-race mechanical issue – obstructed his racing line, which helped Martin Truex Jr. take the lead.

Truex would hold off Kyle Larson for the Stage 2 win with Hamlin finishing third.

“I thought (Logano) was trying to stay on the lead lap, but they said he was 24 laps down and so he was kind of air blocking us and we lost the lead, and we lost that stage,” Hamlin said after the race.

Logano claimed he was simply racing for every available point.

“The situation was that I had about four or five cars that it was possible for me to catch, which is five points. You tell me if it is worth it. I would say it is worth it and I have to go,” he said. “I have to try to get those spots if I can get them.

Told of Logano’s comments, Hamlin was not pleased with the explanation.

“Make up positions? He’s 24 laps down, that’s the most idiotic statement I’ve ever heard. We’re battling for the end of the stage, it’s not your day, you’ve had bad luck, we get it, but I don’t understand that at all. That’s just a stupid statement by an idiot,” he said.

“You’ve got to get out of the way. When it’s not your day and your 20-something laps down, you’re not going to make those positions up. It ain’t going to make one position difference at any point of the race, and it didn’t.

“I probably shouldn’t call Joey an idiot, he’s not an idiot, but it’s just a bad choice to say he’s battling for something. He’s not fighting for anything. He just needs to run around the race track, stay in one lane, maybe the high lane because nobody’s running up there, get the laps over with, get the race over with, go home, work on it at Talladega and try to win that race.”

As it turned out, Hamlin recovered quickly and started the final stage in second behind Larson. But on Lap 272 of 400, he suddenly radioed his crew that he may be “blowing up.”

As everyone watched anxiously to see if smoke would come billowing out of Hamlin’s No. 11 Toyota, he lost some positions on the track but managed to finish the entire race, ending up fifth.

“I missed a shift on the last restart. The car changed tones and lost a little power, but it’s next year’s motor which is not concerning any more this year,” Hamlin said. “Certainly, I was concerned that we weren’t going to make it.”

In the final stage, Hamlin said he “lost control of the race” as he found the track get tighter.

“There were no cautions to pick up the rubber. We just got tight. Once we lost control – lost the clean air – it was so difficult to pass,” he said.

“I needed to be up front with as tight as my car was, so I just lost the lead and backpedaled from there. Top-five, this track, I’ll take it every week.”