Hamlin offers Keselowski advice: "It's hard to win a championship on your own" 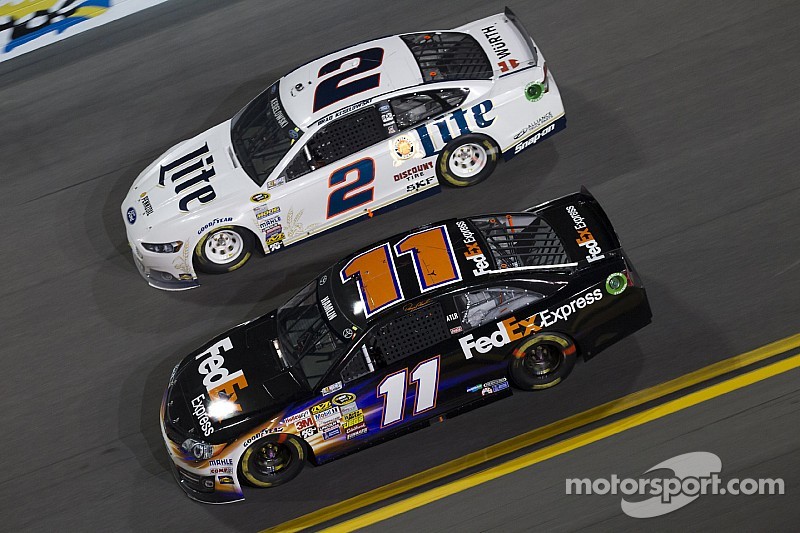 Suffice it to say, there’s no love lost between Denny Hamlin and Brad Keselowski.

While the drivers both come from a working class background, both are in their early 30s and both are aligned with two of NASCAR top powerhouses, that’s about where the similarities end – at least philosophically.

I will take the respect from my peers because that trophy, they can't put (it) in my casket

The two Sprint Cup Chase contenders have been at odds since their Nationwide Series days. As of last month at Charlotte Motor Speedway, it was clear in the closing laps – as well as on the cool down lap – that the Hamlin vs. Keselowski rivalry is far from over.

So it wasn’t surprising that Hamlin used Tuesday’s NASCAR teleconference with the media to express not only his displeasure, but his lack of respect where the driver of the No. 2 Ford is concerned.

“If you ask me, do you want a championship trophy or do you want the respect of your peers, I will take the respect from my peers because that trophy they can't put in my casket,” Hamlin said. When asked if Brad is the most hated driver in the garage, Hamlin would only offer this; "There's a lot of animosity."

A comeuppance ... Learn respect or get none

Hamlin, who was discovered on the short tracks of Virginia, entered the sport looking to make a name for himself with a take-no-prisoners attitude – at first. Then he had a run in with veteran Kyle Petty. Hamlin, who was running third at Dover, punted Petty’s lap down car. After the race, Petty summoned Hamlin to his motorhome for a chat.

When I hear Brad say that this is the only way a person like me can make it ... I feel like it's a scapegoat statement

Hamlin, saying he came up the same way BradK did

“He says, ‘Look, you don't know how many other drivers text me or called me and said I'm glad you did that to that punk, he has no respect for anyone else’,” Hamlin recounted. “And immediately I was like, ‘Wait a minute, no other driver's like me?’  Some people care about that.  Some people don't.

“But immediately I was like, ‘Well, that's not something I want.  I don't want to be a driver that has zero respect from my peers.  I want to be someone who people look up to, other drivers.’ And so that was my moment where I was like, ‘Man, I've got to change the way I do things both on the track and a little bit off the track as well.’”

Hamlin has worked to gain the respect of his peers. He has become a voice for the drivers as well. And he takes issue with the attitude that a driver has “to run into people to be successful”.

“When I hear Brad say that this is the only way a person like me can make it, what do you mean like you?  I had to get here just on hard work too,” Hamlin said. “I didn't have money behind me or anything else.  What's the difference?

If Brad would have talked to Jeff and said, ‘man, I was going for a hole.  It was my only chance, you know, I'm really sorry it cut your tire,’ I think it goes totally different

“I hate that statement.  And I feel like it's a scapegoat statement when it says this is the only way that a person like me can make it. That's not true.  You made it because people see potential in the way he drives and that he is fast and he does a great job and has already won a championship in a very short career.  I believe that that is a bad statement that he throws out there every time.

“But it's his prerogative and he can do what he wants.  He has a job and has an owner that loves him and he's driving for a very fast crew chief. He's got a lot of really good things working for him.  In my opinion, and I want to stress my opinion because this is what I think, is that he just has got to work on the respect factor from his peers.”

Hamlin believes a good place to start for Keselowski would be learning to accept responsibility for his actions. For Hamlin, that would include an apology when necessary or at least allowing the competition to sound off.

“As drivers, you're just looking at someone to say, ‘I'm sorry I ruined your day, I screwed up, oh, well, I apologize.’ When that doesn't get said, then immediately it just lights a fire in your stomach. He doesn't have any remorse.  It's just like oh, well, it's your problem.

It's hard to win a championship on your own on the racetrack.  And I feel like I've learned the hard way with that, that these guys can make your job hard, if they really want to.

Hamlin on BradK having so many enemies

“That just lights a fire in your insides, especially when you just had a bad day and your season could have just rested on that one mistake or whatever you want to call it.  I think that that really set things off.

“I think if Brad would have talked to Jeff and said, ‘man, I was going for a hole.  It was my only chance, you know, I'm really sorry it cut your tire,’ I think it goes totally different. Instead, it was oh, well, sorry, bud, you left a hole.  If he did it to me I would have had the same reaction as Jeff.  No question.  I think that's what escalated it the most.”

Face the music ... It's hard to win the title with no friends

Hamlin acknowledges that it’s up to each individual driver to decide how to handle his fellow competitors. Certainly, most people avoid confrontation at any cost. But while Keselowski made be able to skirt his peers off the track, Hamlin believes the day will come when he needs friends on the track and there will be none to be found.

With two races to decide the title, that day could come sooner than later.

“Sometimes you just have to just face the music and if you're in something, just listen to what the other person has to say and you may not always agree,” Hamlin said. “And, look, I'm not the prime example. I've made so many mistakes, it's silly.  But I've learned from them.  And I feel like I've gotten the respect of my competitors because of that.

“That goes a long way when ‑‑ trust me, I can guarantee you this:   If it comes down to the end of the race and someone can help me or they can help Brad and I've got the respect of that person, they're going to help me over Brad.

“And if it comes down to a championship ‑‑ it's hard to win a championship on your own on the racetrack.  And I feel like I've learned the hard way with that, that these guys can make your job hard, if they really want to.”

The hypocrisy of the Brad Keselowski criticism

NASCAR punishes crew members/crew chiefs, but not the drivers for Texas brawl