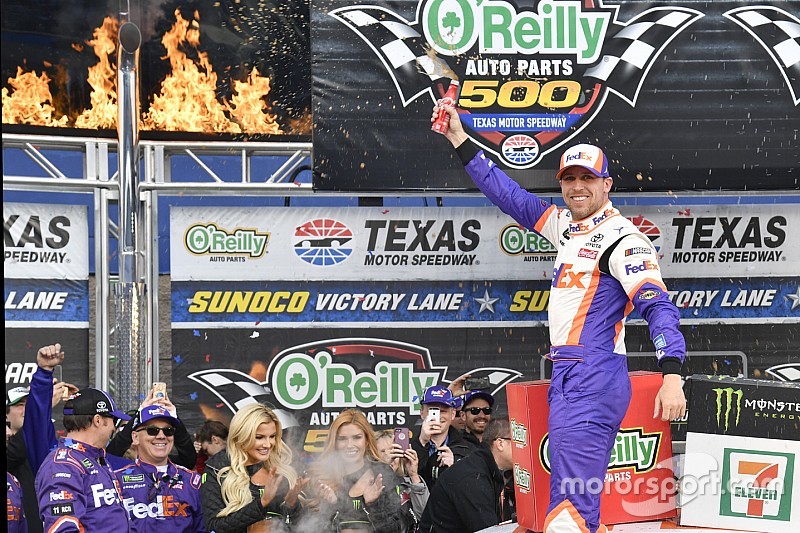 It was a Joe Gibbs Racing driver that claimed the NASCAR Cup Series victory at Texas, just not the one everyone thought.

Hamlin was penalized once for pitting and another time for an uncontrolled tire but regained the lead with 11 of 334 laps remaining by using a fuel-only stop on his final green-flag pit stop of the race.

He emerged with a more than two-second lead over Bowyer and was never seriously challenged for the lead.

The win is Hamlin’s second in the NASCAR Cup Series this season – he also won the Daytona opener – and the 33rd of his career.

Asked how he managed to get the win with two pit road penalties, Hamlin said, "And I missed the entrance to pit road under green. Just a fast car. I had a fast car that could pass anyone in the field. That means a lot.

"It definitely a different type of racing, with the draft and everything and trying to get out of everyone's wake. I'm proud of this team, everyone that helps put this race car on the race track. Joe Gibbs, J.D. Gibbs, still thinking about him and his legacy.

"Once we got out front we were actually able to pull away from the front a little bit. We just had a super-fast car and that's why we won. We tried everything we could to throw it away but we still found a way to win."

Rounding out the Top 10 were William Byron, Aric Almirola, Kevin Harvick, Kurt Busch and Kyle Busch, who failed to complete the triple-header sweep after winning the Xfinity and Truck races this weekend.

Following the break between Stage 2 and 3, Ryan Blaney elected not to pit and remained in the lead, while Kyle Busch was the first off pit road taking fuel only.

Both Hamlin and Harvick were penalized for uncontrolled tires during their pit stops and both had to restart from the rear of the field.

The race returned to green on Lap 178 with Blaney leading the way with Suarez alongside him.

Blaney made his way down pit road on Lap 218, which seemed to trigger a round of green-flag stops. Suarez and Alex Bowman were the next drivers to make their stops.

On Lap 227, smoke poured out of Blaney’s No. 12 Ford and he immediately took his car down pit road where his crew went to work under the hood. “I don’t know, it just blew up,” Blaney said over his team radio.

With 100 laps remaining in the race, Kyle Busch held the lead but had not yet made his green-flag pit stop.

Once the cycle of green-flag stops was complete on Lap 241, Suarez cycled back into the lead, followed by Kyle Busch, Bowyer, Almirola and Byron.

On Lap 246, Kyle Busch used a pick from a lapped car and got around Suarez to reclaim the top spot.

Daniel Hemric spun off Turn 2 to bring out a caution on Lap 255. He appeared to suffer some damage to the right-rear of his No. 8 Chevrolet.

Several lead-lap cars elected to pit but Almirola, Jones and Chase Elliott elected to stay out. Kyle Busch was the first off pit road. The race returned to green on Lap 261.

Jones grabbed the lead on the backstretch on the restart as Kyle Busch moved into second.

Kyle Busch went to the inside of Jones on the frontstretch to reclaim the lead with 70 laps to go.

With 60 laps to go, Jones got back around Busch in Turns 1 and 2 as Busch got loose to reclaim the lead. Hamlin moved into second and Almirola third as Busch dropped to fourth.

Busch hit the wall again with 53 laps remaining and was forced to head to pit road under green for repairs. His bid for a third consecutive win on the weekend appeared to be over.

With 50 to go, Jones held a small advantage over Hamlin with Almirola in third, Byron fourth and Elliott in fifth.

On Lap 295, Elliott decided to make his final green-flag stop of the race. A slew of others soon followed.

With 30 laps remaining, Hamlin remained out front and had not yet pit. About a dozen cars still had to pit once more for at least fuel.

Once the cycle of stops was completed on Lap 322, Hamlin, who took fuel only on his final stop, moved back into the lead followed by Bowyer, Suarez, Jones and Byron.

Daniel Suarez "happy" and "grateful" of weekend effort at Texas