Hamlin's high hopes for the remainder of the Chase 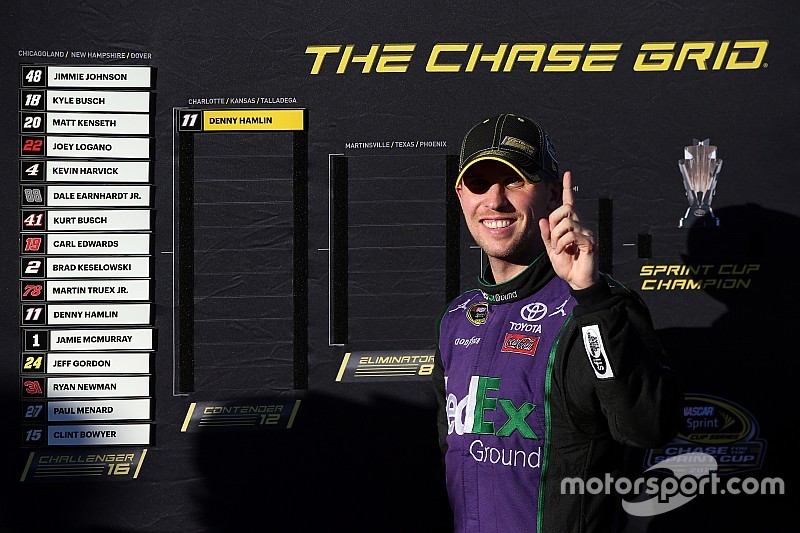 Momentum is with the No. 11 Joe Gibbs Racing team, and Denny Hamlin's strongest tracks are still to come.

Before Denny Hamlin answered the first question in his post-race winning press conference, he turned the tables on the media.

“Whose bracket did it break today, if you had us going out in the first round,” Hamlin asked. “Anybody?”

I had to raise my hand. Although I was up in the press box – and not in the media center where Hamlin held court – when asked on SiriusXM NASCAR Radio on Saturday which of the drivers would be out following the Challenger Round, he was near the top of the list of potential casualties.

Certainly, Hamlin’s torn ACL played into my decision more than his record at Chicagoland, New Hampshire and Dover. His sixth-place finish at Richmond was not surprising, considering he has two wins and an average finish of 10.8 at his hometown track. And sure, the No. 11 FedEx team was on a roll leading into that race with top-five finishes in the previous three races.

But Hamlin’s win the following week at Chicagoland was not only a career-first victory at that track but also just his second of the season. Hamlin’s only other win in 2015 came at Martinsville Speedway in March, 21 races ago.

Yes, Joe Gibbs Racing raised the bar this summer, but rather than Hamlin, it’s been Kyle Busch and Matt Kenseth leading the charge with four wins apiece. However, the senior JGR driver, who has piloted the 11 car since 2005, was quick to remind pundits – even those afraid to raise their hands – that the races in the Chase for the Sprint Cup play to his strengths.

“I've been telling people, look at our finishes going into the Chase,” Hamlin said. “We've been strong. Everyone else gets the headlines, but we have been chipping away at some really good finishes here lately, doing a lot of great things.

“Our Toyotas have been really fast. Joe Gibbs Racing has given us some really good cars here lately. This is no exception. Obviously, we just were very fortunate with the late-race restart, and we were able to capitalize on it. I honestly didn't like our chances when I saw two cars had stayed out versus one. But we made the best of the situation.

“So I think we can make a run. I've told everyone these Chase tracks set up better for nobody more than me as the Chase goes on. So I think the next round is the most challenging for us personally. You just get us to that final eight round and I'm pretty confident we'll be at Homestead with a chance.”

Having won just one race in 2014, Hamlin was not a top pick in last year’s Chase either. But following four playoff rounds over 10 races, the 34-year-old racer was one of the last four men standing once the tour rolled into Homestead-Miami Speedway for the season finale.

And with his comeback win on Sunday – after spinning on Lap 2 and fighting from 42nd to first – Hamlin won’t have to worry about the next race at New Hampshire or the following week at Dover, where he has his worst average finish (19.3) of any track in the Chase. He and the No. 11 team can set their sights on the Contender Round, which features battles at Charlotte, Kansas and Talladega.

“Maybe it changes the way we plan our racecars,” Hamlin said. “I mean, a Dover car is very similar to a Charlotte car, so maybe we take what we thought was going to be an Elimination car and apply it now to the next racetrack.

“It could change things for sure.  It will make us focus a little bit more on that next round.  Now we got two weeks to do that. Definitely it will be an advantage for us to have a couple weeks to just focus on those particular racetracks.”

Although the Chase stakes rise in the Elimination Round where eight drivers fight for the final four spots, that segment is almost custom-made for Hamlin, with contests at Martinsville Speedway, Texas Motor Speedway and Phoenix International Raceway. Hamlin has eight wins at those three tracks combined and average finishes of 8.3, 10.8 and 12.3, respectively. His record at Homestead-Miami Speedway includes two wins, four top fives and six top-10 finishes in 10 starts.

While the 2015 Sprint Cup championship won’t be decided for another nine weeks, there’s no doubt that Sunday’s win could not have come at a better time for Hamlin to jump-start a playoff run.

“It's big,” Hamlin said. “We find ourselves, no matter what year we've had, with an advantage over everyone right now.  We're very proud of that.  We entered this Chase with as much momentum as we've ever had.  Maybe not race wins, but certainly top‑five finishes.  We've been battling for race wins here in the last two months.

“Even though my teammates have been winning, we've been like the second‑best car. There's four of us.  We've been right there, just haven't had things work out for us. We had a similar restart like this at the end of Darlington. Unfortunately, it was a teammate (Carl Edwards), so I had to treat it slightly different. But I can tell you that things worked out for us, and obviously this win gives us the momentum we need.”

Kurt Busch and the win that got away