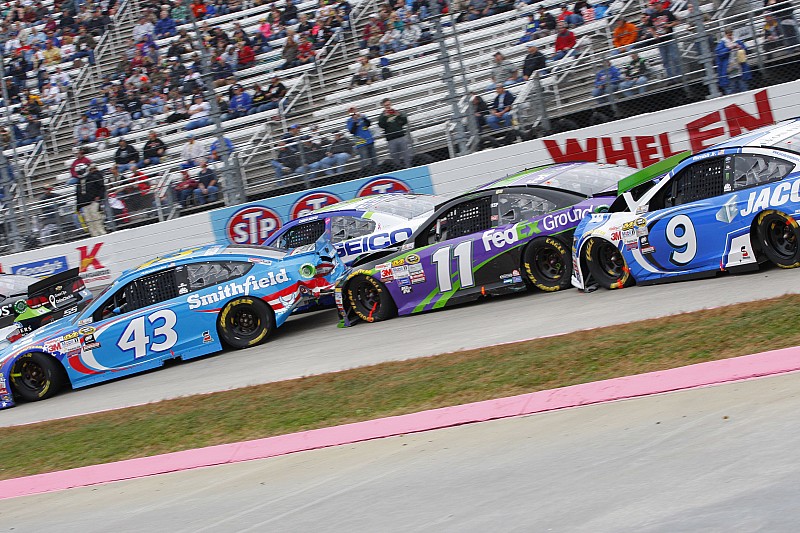 If Denny Hamlin’s impression of the current Chase for the Sprint Cup is correct, then NASCAR couldn't be headed to a better place this weekend than Texas Motor Speedway.

Hamlin, who was knocked out of the playoffs prior to the Eliminator Round, says racing has changed dramatically since he entered the series in 2005.

“It’s a no holds barred, wild, Wild West,” Hamlin said. “Sure, when people crown the statement that a driver’s doing what he’s got to do and they became okay with that statement, you’re just opening up Pandora’s box – ‘well, everyone is just doing what they have to do,’ I guess.

“It’s a bad statement, it’s an ugly statement, I wish we could all do this fair and square and the fastest person win, but I just don’t know if that’s going to be the case.”

Yes, Hamlin is still bitter after being bumped out of the Chase — and his third-place result at Martinsville Speedway on Sunday offered no relief. The No. 11 Joe Gibbs Racing team raced its way into the Champion Round at Homestead Miami Speed way last year and appeared destined to go deep in 2015 after winning the Chase opener at Chicagoland. In the Contender Round, Hamlin entered Talladega Superspeedway second in the standings following a fourth-place finish at Charlotte and a second-place run at Kansas Speedway.

The structure in which we have around us is not very strong as far as an authority figure saying, ‘No, you cannot do that anymore.’ It’s just tough for us because this is what’s been created

Hamlin took the lead at Talladega on Lap 10 but had problems with his escape hatch on the No. 11 Toyota on Lap 86 and was forced to pit. He dropped to 32nd — then 39th after another pit stop and never recovered. To put salt in his wounds, Hamlin was collected in the multi-car wreck triggered by Kevin Harvick in over-time. The 18-point advantage Hamlin had over ninth-place Kyle Busch disappeared in one race. Busch moved on in the Chase. Hamlin didn’t.

When NASCAR Chairman Brian France was on SiriusXM NASCAR Radio last month, he applauded Joey Logano’s actions at Kansas where Team Penske racer took Matt Kenseth out of contention with five laps remaining in the race.

“Late in the race, I think that’s a great example of everybody doing probably exactly what they should be doing,” France said. “You had Matt Kenseth trying to block and hold his position. He had a faster car behind him, and when you block, you risk that somebody is going to be in that position.”

France called Logano’s move “a very smart decision” because not only did he win the race, he eliminated one of the toughest competitors in the Chase.

“To have an opportunity to put one of the top teams on the outside looking into the next round in Matt Kenseth, who has run so well, that’s a smart thing to do.

“You have to give them a lot of credit. This is the strategy that we all thought was going to be different when you have this kind of format. But it does reward aggressive racing at the end of the day.”

While Hamlin honed his skills on short tracks and can be aggressive when deemed necessary, he feels the evolution of this Chase format is geared to “survival of the fittest.”

But when boys have it is taken to the next level, Hamlin questions who will police the sport.

“The structure in which we have around us is not very strong as far as an authority figure saying, ‘No, you cannot do that anymore.’ It’s just tough for us because this is what’s been created,” Hamlin said.

“I love Brian France, but when he says that, ‘hey drivers are doing what they gotta do’, it seems like he’s promoting this type of racing so that’s tough to crown a true champion when things go like this.”

Been there, done that

Hamlin says he’s not surprised at anything that occurs at a short track — including Kenseth’s revenge against Logano on Sunday.

Hamlin has endured his own run-ins with Logano. After he dumped Logano at Bristol two years ago, his former teammate delivered a blow at Auto Club Speedway that left Hamlin sidelined for four weeks with a compression fracture in his lower back.

Hamlin believes Logano should have reached out to Kenseth before the situation got out of hand.

“I’ve been fine with Joey here lately,” Hamlin said. “I’m not going to stick sides too much, but Joey didn’t choose to call me until the Chase started — in fear of getting wrecked.

“I think in my opinion, you have to control that a little bit better and talk to the person. If you’re just going to stick your nose in the air and say, ‘Well, that’s the way it’s going to be,’ then you’re going to have to expect it back.”