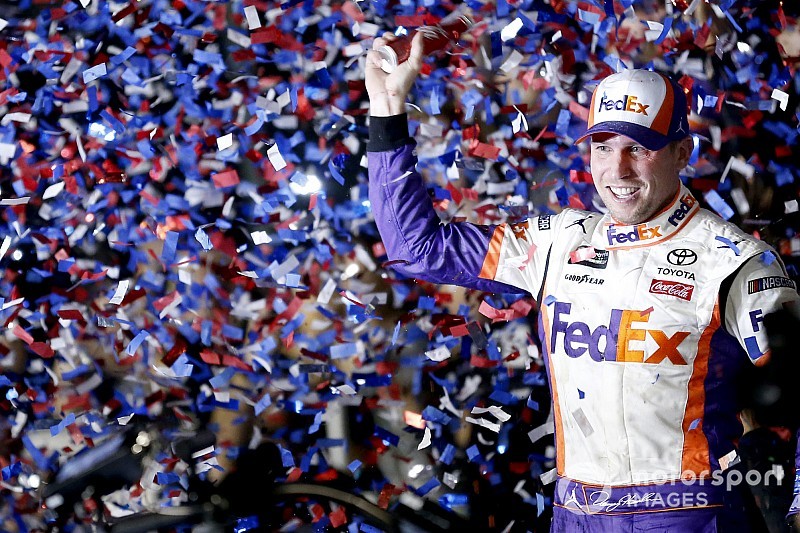 Denny Hamlin’s 2018 season was dispiriting, but his confidence never lowered.

Hamlin went the entirety of 2018 without recording a single win, marking the first time the Virginia native didn’t secure a victory in a season since he ran a seven-race schedule in the Cup Series in 2005.

Now, just one race into the 2019 season, Hamlin is a race winner once again.

After a multi-car accident on Sunday sent the 61st running of the Daytona 500 into overtime, Hamlin took over the race lead on the final restart and fended off Joe Gibbs Racing teammates Kyle Busch and Erik Jones to win his second Daytona 500 in just four years.

“I certainly think it validates the first (win),” said Hamlin, who broke a 47-race winless streak Sunday. “I know it’s not luck, but there’s been a lot of one-time winners of a lot of races, not just the Daytona 500. Sometimes circumstances allow you and almost hand you wins at times.

“But, certainly, if you win a couple, that means that’s a skill thing. You’ve put yourself in that position.”

Though the 2018 season was exasperating at times for Hamlin, the 38-year-old driver never lost hope.

“I was still competitive,” he said. “I think we had a string in the middle right when the playoffs were starting. We won like three out of four poles in a row. We were fast. We just struggled in certain situations.

“Some of the greatest drivers had winless seasons – Tony Stewart, Jeff Gordon, those guys. I was never doubting whether I was still capable of winning races.”

An emotional win for J.D.

Hamlin’s win on Sunday was especially emotional for car owner Joe Gibbs, who was still grappling with grief over the loss of his son and the co-founder of JGR, J.D. Gibbs.

It was J.D. Gibbs who discovered a young Hamlin in the early 2000s, who convinced his father to allow Hamlin to drive J.D. Gibbs’ beloved No. 11 car and who continuously bragged to his father over the years about how the gamble they took on Hamlin paid off.

On Lap 11 of Sunday’s race, everyone’s minds weren’t focused on the racing. They were diverted to the memory of J.D. Gibbs. On that lap of tribute, countless JGR pit crew members stood on the pit wall and honored the legacy of their late colleague who meant so much to their organization.

And in the first race since his passing last month, Hamlin put J.D. Gibbs’ favorite number, 11, in Victory Lane.

“It's the most emotional and the biggest win I've ever had in my life in anything,” Joe Gibbs said. “J.D. built our race team, was the guy that ran day-to-day operations for 27 years. He invested his occupational life in our race team.”

Given all the circumstances, Hamlin said this win is more special to him than his 2016 Daytona 500 victory.

“I'm taking this one in a little bit more,” Hamlin said. “Everything was just so crazy at the end of the 2016 race with the final lap, how it all played out. I couldn't believe anything that happened. I was in awe the whole time.”

Hamlin has built himself an impressive resume in the Cup Series. He was named Rookie of the Year in 2006, was the first rookie in history to qualify for the Chase, won two Daytona 500s, won the 2015 All-Star Race, among countless other accomplishments that will forever be etched in history.

But through all those admiral achievements, Hamlin has been unable to win a championship.

While some may say his career is overshadowed by his inability to win one, Hamlin said his career could end right now and he would still be satisfied with his career.

“I could be done now and be totally content with everything that I’ve accomplished,” Hamlin said. “I’m not going to be burdened by anything hanging over my head of not accomplishing this or that. I’ve already accomplished way more than I ever thought I would. I do this because I’m passionate, I’m competitive and I want to win.”

With another Harley J. Earl Trophy to put in his trophy case, Hamlin has his sights set on other famed races he wants to win.

“The Brickyard 400 is one that slipped away at the end of last year that really pierces me really good,” he said. “I would love to win that one and obviously the Coke 600.”

On Monday, Hamlin continued the renowned tradition of officially inducting his race-winning car inside the Daytona International Speedway Tickets and Tours Building during the annual Champion’s Breakfast. He also helped unveil the 2020 Daytona 500 logo.