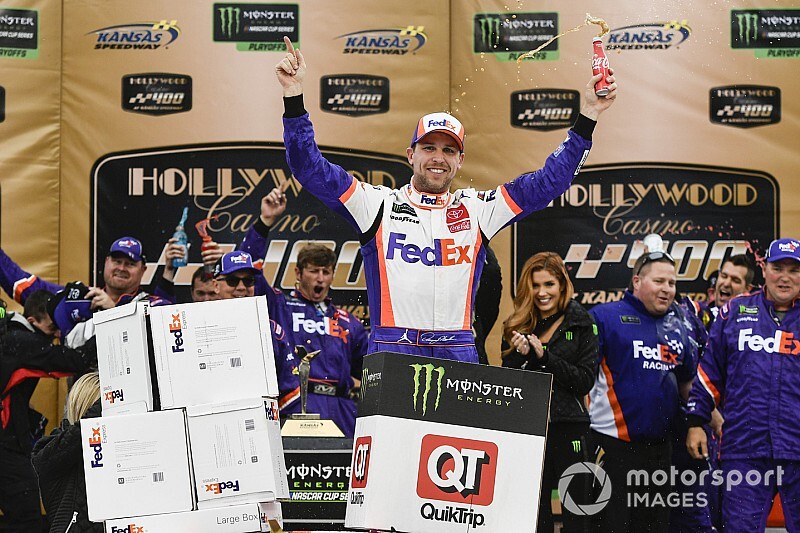 Denny Hamlin held off Chase Elliott in double overtime to win Sunday at Kansas Speedway, which also saw Elliott squeak into the next round of the playoffs.

Hamlin led the way on the restart to the second overtime and quickly put some distance between himself and Elliott.

After taking the white flag, Elliott tried furiously to get alongside Hamlin by Hamlin edged him by 0.128 seconds to win Sunday’s Hollywood 400.

The win is Hamlin’s fifth of the 2019 season and 36th of his career and second at Kansas.

"This is a great feeling. That car was awesome to dominate that whole second half," Hamlin said. "I have to thank everybody who pushed me on the restarts, Kyle (Busch), (Chase Elliott) at the end. Good to see (Elliott) make (the playoffs) by points anyway.

"I'm just really happy for this whole. It's been great. We've been running really good. I cannot wait to get to Martinsville."

Asked if he felt more and more like his first championship could be a reality this season, Hamlin said: "It's step-by-step, week-by-week. I'm not getting too far ahead of ourselves. We concentrate every week as if it's the most important one. The win here kind of shows that."

Hamlin said the key to holding on to his lead through the overtimes was remaining on the bottom of the track and getting good pushes on the restarts.

"It was all about the push I got from (Elliott) and really (Busch) those last couple of restarts. That was the most important thing for us - to get a good restart. Once we got out front, we could hold it wide-open. Our car was built for downforce, so it worked out that it was just fast enough to win."

Three drivers advance to the semifinal round of the NASCAR Cup Series playoffs through wins – Hamlin, Kyle Larson and Ryan Blaney.

Joining them in the Round of 8 are Truex, Harvick, Kyle Busch, Joey Logano and Elliott, who edged Brad Keselowski by three points for the final spot.

Following the break between Stages 2 and 3, all of the lead-lap cars elected to pit with Hamlin the first off pit road.

On the restart on Lap 167, Hamlin was followed by Blaney, Elliott, Truex and Kyle Busch.

Blaney got around Truex on Lap 171 to move into the second position behind leader Hamlin.

On Lap 193, Kyle Busch used the high-line to get around Blaney and take over the second spot as Blaney dropped to third.

Parker Kligerman tagged the wall on Lap 204 but there was no caution. Kligerman made his way down pit road under green for repairs without incident.

Several teams began a round of green-flag pit stops on Lap 214 as the window opened to make it to the end of the race on fuel. Among the first of the lead-lap cars to pit were Jones and Harvick.

During his stop, Aric Almirola was penalized for an uncontrolled tire and had to make a pass-through penalty on pit road under green.

Once the cycle of stops was completed on Lap 226, Hamlin returned to the lead followed closely by Kyle Busch and Blaney.

With 30 laps remaining in the race, Hamlin’s lead over Kyle Busch remained about 1 second. Blaney was third, Jones fourth and Byron fifth.

On Lap 248, Hamlin nearly avoided a collision with the lapped car of Paul Menard, which allowed Kyle Busch to close to within a half-second of the leader.

On Lap 253, Blaney – who had tagged the wall on the frontstretch – then blew his right-rear tire coming off Turn 2 to bring out a caution.

All of the lead-lap cars elected to pit with Hamlin the first off pit road. On the restart on Lap 259, he was followed by Larson, Johnson, Kyle Busch and Kurt Busch. The first three took only two new tires, Kyle Busch was the first car with four new tires.

With five laps remaining, Hamlin held a small lead over Kyle Busch with Elliott having moved to third.

Elliott moved into second with four laps to go.

Bubba Wallace spun in Turn 2 after losing a wheel in an incident that also collected Matt Tifft and Ryan Preece on Lap 265.

Keselowski, who had taken the wave-around to get back on the lead lap the previous caution, pit for four new tires. On the start of overtime, it was Hamlin followed by Elliott, Kyle Busch, Jones and Johnson.

Just as Hamlin was about to take the white flag, Suarez and Hemric wrecked coming off Turn 4 to bring out the caution and send the race into double overtime. To start the second OT, Hamlin led followed by Kyle Busch, Elliott, Jones and Byron.