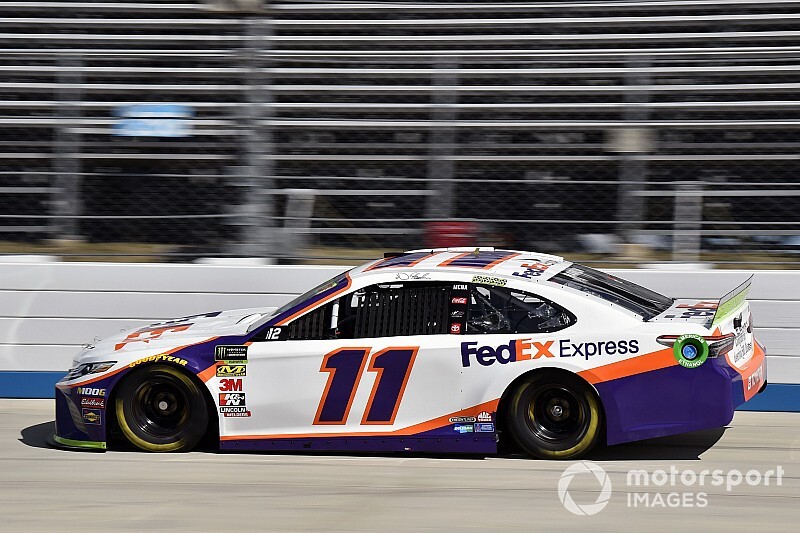 Hamlin led 113 of the 120 laps in the segment and held off Martin Truex Jr. for the stage win. Kyle Larson was third, William Byron fourth and Kevin Harvick completed the top-five.

Just before the race got underway, Logano pulled his No. 22 Ford down to pit road complaining of an issue with the rear end of the car.

After a quick examination by his team, Logano took his car to the garage with what appeared to be a broken rear end axle. The got underway with Logano still in the garage.

Hamlin started on the pole and led the first eight laps before a caution came out for debris on the track on Lap 9 at the same time Elliott fell off the pace. He quickly chimed in over his radio, “I just blew up.”

Elliott took his No. 9 Chevrolet right to pit road – the second playoff driver to get knocked out of contention for the race in the first 10 laps.

“I had an engine failure of some sort,” Elliott said in the garage. “We don’t know what it was. It just cut off.”

The race returned to green on Lap 13 with Hamlin continuing to lead the way.

Logano, with his car repaired, returned to the track on Lap 22.

Larson got side-by-side with Hamlin to challenge for the lead on Lap 28 but Hamlin was able to re-establish himself as the leader.

After 50 laps, Hamlin had moved out to a 1.4-second lead over Larson with Truex in third, Byron fourth and Harvick fifth.

With 50 laps remaining in the first stage, Hamlin held about a 1-second lead over Truex while Byron had moved into third.

Several of the lead-lap cars hit pit road on Lap 77 to start a round of green-flag pit stops.

Aric Almirola, Bubba Wallace and Ryan Newman were all penalized for speeding on pit road during their respective stops and all had to make a pass-through penalty on pit road.

Once the cycle of stops was completed on Lap 84, Hamlin returned to the lead. Truex ran second and Larson third.

With 20 laps to go in the stage, Hamlin’s lead over Truex remained about 2 seconds with Larson in third, more than 8 seconds behind the leader.

With five laps remaining, Truex had closed the gap to Hamlin to under a second.