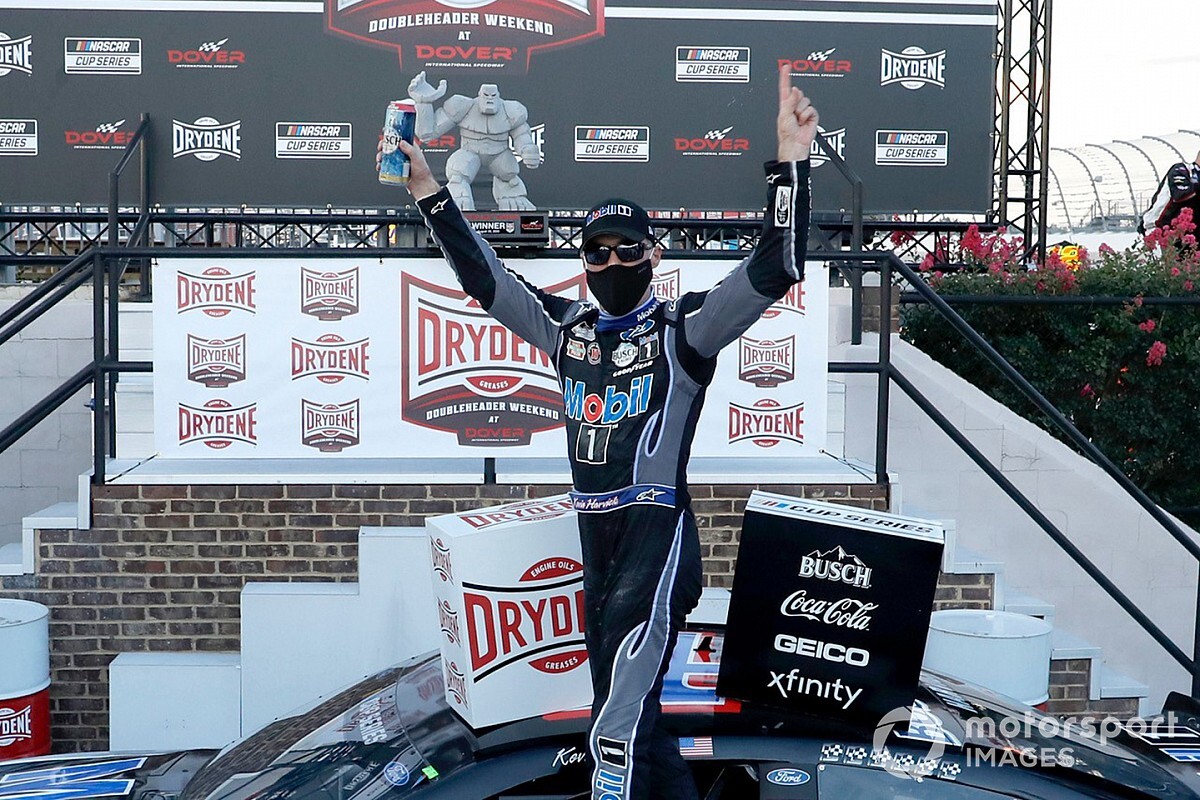 One day after Denny Hamlin tied him for the NASCAR Cup Series wins lead, Kevin Harvick answered with authority.

Harvick easily cleared Jimmie Johnson on a restart with 17 of 311 laps remaining in Sunday’s Drydene 311 at Dover (Del.) International Speedway and cruised to the victory over Martin Truex Jr.

“What a weekend, boys,” Harvick said over his team radio has he took the checkered flag. “Fought all day yesterday to get it right and it paid off today!”

The win is Harvick’s seventh of the 2020 season, the most of any driver, and the 56th of his careere, which ties him with Kyle Busch for ninth in all-time victories.

Earlier in the race, Harvick also clinched the Cup Series regular season championship with one race remaining, which will give him an addition 15 playoff points when the playoffs begin in two weeks.

"Congratulations to Ford on their 700th Cup win. I want to thank everyone on this team," Harvick said. "Rodney (Childers, crew chief) and everyone at Stewart-Haas Racing for overcoming what happened yesterday with the track bar and nailing the balance today. I want to say Happy Birthday to DeLana’s mom and Dax, our engineer, same birthday.

"What a year. What a seven-years. I am just really proud of everybody at Stewart-Haas Racing for being able to drive this car. Week after week they just put so much effort into making this thing go fast and it has been a great year.”

Asked how his No. 4 team is situated headed to the playoffs, Harvick said, "I love the grit of our race team. I think that is what Gene Haas and Tony Stewart have built at Stewart-Haas Racing. A team with a lot of grit. Sometimes we don't have the fastest car but we have guys willing to suck it up and when we have a weak link that day someone else will carry the team.

"I am really proud of that and that is what it is all about. You are only as good as the people around you and we have great people.”

Johnson ended up finishing third, William Byron was fourth and Alex Bowman rounded out the top-five.

Following the break between Stages 2 and 3, all lead-lap cars decided to pit with Harvick once again the first off pit road.

On the restart on Lap 193, Harvick led the way followed by Denny Hamlin and Logano.

With just under 100 laps remaining in the race, Harvick had already expanded his lead to more than 2 seconds over Logano while ran third, more than 5 seconds behind the leader.

On Lap 216, Quin Houff spun off Turn 2 to bring out a caution but managed to keep his car off the wall.

Once again the lead-lap cars all elected to pit and again Harvick was the first off pit road. On the restart on Lap 222, Harvick was followed by Hamlin and Bowman.

On Lap 228, Hamlin was forced to pit under green because of a loose wheel. When he returned to the track, he was running 29th and two laps down.

With 75 laps to go, Harvick already built up a more than 2-second lead over Logano with Truex having moved into the third spot.

With 50 laps remaining in the race, Harvick’s lead over Logano remained more than 4 seconds while Truex ran third, Bowman fourth and Byron fifth.

Corey LaJoie hit the wall off Turn 3 on Lap 289 to bring out a caution. The lead-lap cars decided to pit with Johnson the first off pit road thanks to a two-tire pit stop.

On the restart on Lap 295, Johnson led the way followed by Harvick, Bowman and Truex.

Harvick got around Johnson to reclaim the lead before the first lap was completed after the restart.

Harvick dominated much of the second stage, easily holding off Logano to complete the sweep of the first two stages.

Hamlin was third, Truex fourth and Blaney rounded out the top-five.

Following the break between Stages 1 and 2, the lead-lap cars pit with Harvick the first off pit road. After pit stops, NASCAR displayed the red flag to make repairs to a concrete patch exiting off Turn 4.

The race returned to caution after a nearly 13-minute delay. On the restart on Lap 79, Harvick continued to lead the way.

With 90 laps to go in the second stage, Harvick had built a 1.6-second lead over Ryan Blaney while Logano had moved into third.

LaJoie spun around in Turn 2 after contact from Ty Dillon to bring out a caution on Lap 100. The lead-lap cars all pit with Logano the first off pit road.

Johnson was penalized for speeding on pit road and had to restart from the rear of the field. On the restart on Lap 107, Logano was followed by Harvick and Blaney.

On Lap 114, Harvick went to the outside of Logano in Turn 1 and reclaimed the lead.

With 50 laps remaining in the stage, Harvick had built up a 1.8-second lead over Logano while Blaney remained in third.

Harvick’s lead had ballooned to more than 7 seconds over Logano with 20 laps to go in the second stage.

On Lap 181, Truex, Blaney and Hamlin went three-wide with Hamlin coming out with the third spot, Truex fourth and Blaney dropped to fifth.

With one of 70 laps remaining, Harvick powered around the outside of Blaney to grab the lead and held on to take the Stage 1 win.

Byron ended up third, Almirola fourth and Keselowski rounded out the top-five.

DiBenedetto, who started on the pole thanks to the invert, quickly got a jump on the rest of the field but the race went under caution on Lap 6 for a multi-car incident.

Ricky Stenhouse Jr. went around after contact with Logano in an incident on the frontstretch that also sent Chase Elliott plowing into the rear of Kyle Busch’s No. 18 Toyota. Joey Gase and Garrett Smithley also spun out.

Elliott took his No. 9 Chevrolet straight to the garage, his race over. Stenhouse and Kyle Busch both received repairs on pit road.

The race returned to green on Lap 12 with Matt DiBenedetto still in the lead followed by Almirola and Blaney.

Almirola quickly powered around DiBenedetto on the restart to take the lead for the first time as Blaney moved into second.

With 40 laps remaining in the first stage, Almirola had built a 1.2-second lead over Blaney while DiBenedetto continued to run third.

NASCAR displayed another caution on Lap 33 for debris on the track in Turn 3. Many lead-lap cars elected to pit but Blaney remained on the track and inherited the lead. DiBenedetto was first off pit road among those who pit.

On the restart on Lap 40, Blaney was followed by Kurt Busch and Byron. DiBenedetto lined up fourth.

With 10 laps to go in the stage, Blaney maintained about a 1-second lead over Byron while Keselowski had moved into third.

On Lap 66, Harvick, who had restarted eighth after the previous caution, got around Byron and took over the second position.

What time and channel is the Sunday Dover NASCAR race?