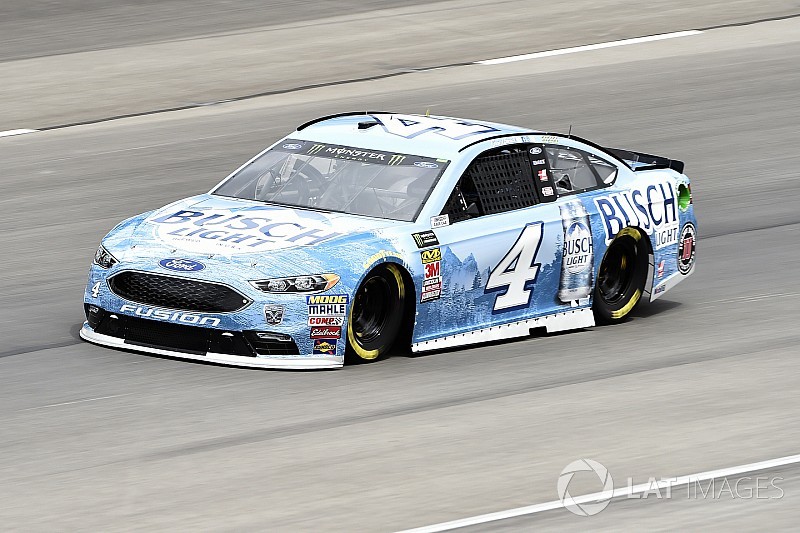 Kevin Harvick continued his mastery of 1.5-mile tracks, claiming the Stage 1 victory at Texas under caution after dominating virtually the entire 85-lap segment.

Harvick had more than a 10-second lead over Martin Truex Jr. when Truex blew a tire and hit the wall on Lap 81.

NASCAR was unable to clear the track in time to restart the stage.

Kyle Busch ended up second, Kurt Busch third, Joey Logano fourth and Kyle Larson – who started from the rear of the field – completed the top-five.

Harvick quickly took the lead on Lap 1 before a multi-car wreck erupted off Turn 4 of Lap 2 when Alex Bowman got loose on his own.

The incident eventually collected Paul Menard, Daniel Suarez and Austin Dillon. On the restart on Lap 8, Harvick continued to lead followed by Bowyer and Blaney.

With 60 laps remaining in Stage 1, Harvick held a solid lead over Ryan Blaney, followed by Denny Hamlin. Suarez, involved in the Lap 2 incident, was already 12 laps down and was forced to pit with multiple tire rubs.

A round of green-flag pit stops began on Lap 44 with Truex, Harvick and Blaney and several others being among the first to pit. Blaney was hit with an uncontrolled tire penalty on his stop and was forced to make a pass-thru penalty.

Once the cycle of stops was completed on Lap 56, Harvick returned to the lead, followed by Truex and Kyle Busch.

Hamlin was among the last to make his green-flag stop and was penalized for going too fast on pit road, forcing him to make a pass-thru penalty.

With 10 laps remaining in the stage, Harvick maintained more than a 10-second lead over Truex, followed by Kyle Busch, Kurt Busch and Logano.

On Lap 81, Truex appeared to blow a right-front tire exiting Turn 4 while running second and slammed the wall to bring out the caution that brought the first stage to the end.

Four drivers began the race having to start from the rear of the field – William Byron due to an engine change; Ricky Stenhouse Jr. for moving to a backup car; Matt DiBenedetto for a transmission change; and Larson after his No. 42 Chevrolet failed pre-race inspection three times.

Truex and Larson taken out early due to tire failures