Harvick calls Johnson "one of the most disrespected great drivers" 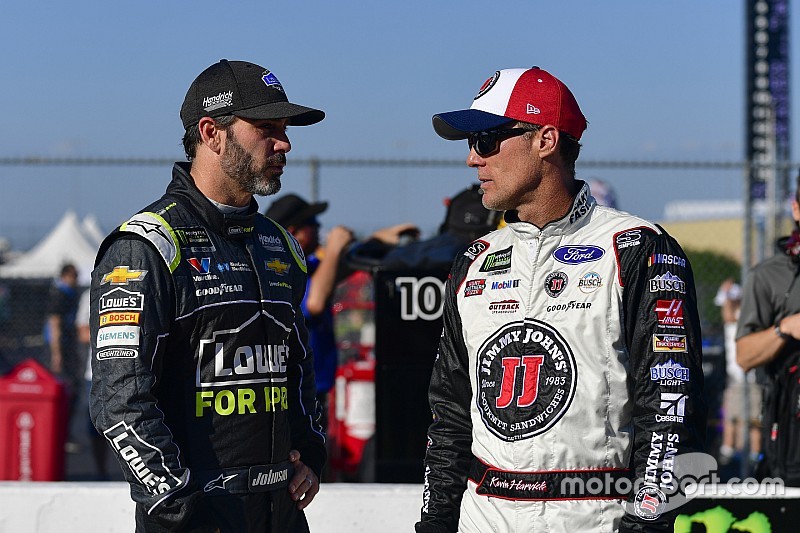 Kevin Harvick doesn’t believe Jimmie Johnson gets the respect he deserves and is happy to play his own role in helping to correct it.

Johnson joined Harvick this week on his show, “Happy Hours” on SiriusXM NASCAR Radio and asked about the experience, Harvick said:

“It was great because I feel like, in my opinion, Jimmie is one of the most disrespected great drivers that have every come through this garage. Jimmie Johnson is just a good old fashioned great guy,” Harvick said Friday at Atlanta Motor Speedway.

“It isn’t like he came from a rich daddy or family that had a lot of money. He came all the way up from the bottom to the top and worked hard and had a lot of success and has won as many championships as Dale Earnhardt and Richard Petty. I never feel like he is on that pedestal next to those guys appropriately.”

To help share that story, Harvick and Johnson touched on several related topics during the 20-minute segment on Wednesday, such as how Johnson got his start in racing and where.

Johnson, 43, started racing motorcycles in 1980 when he was four. Three years later, he won the 60cc class championship. He ran in multiple off-road and desert racing series and never raced on asphalt ovals until 1998 when he was 23 years old.

“I feel like a lot of times the fan base changes so much that you almost have to re-introduce yourself every five or six years,” Harvick said. “Once you hear the Jimmie Johnson story and how he got to where he is, a lot of people know what he has done here, but it isn’t like it was handed to him.

“Our goal was to do something different and I don’t want the fans to not realize what they are watching with Jimmie because he has done so many great things, is such a great person, and a fun guy.”

Johnson, who has won 83 Cup series races and won seven titles, is also joining Harvick in the Fox Sport broadcast booth on Saturday to call the Xfinity Series race at Atlanta. They will be joined by Adam Alexander.

Told of Harvick’s comments later in the day, Johnson said: “I certainly appreciate those kinds words from Kevin. We’ve had a great run and accomplished a lot of great things; more than I really ever imagined that I would.

“But, I feel like every driver probably has something that they probably deserve and something they don’t deserve along the way of progressing through this sport. And, I’ve had my good and my bad and it is what it is. Honestly, I quit paying attention to a lot of the public opinion stuff years ago.

“It doesn’t do me any good and I’m just going to keep my head down and keep working. Some weekends I think things goes your way and you get the praises that you would hope to and other weekends it doesn’t and it’s just kind of the evolution of the sport.”