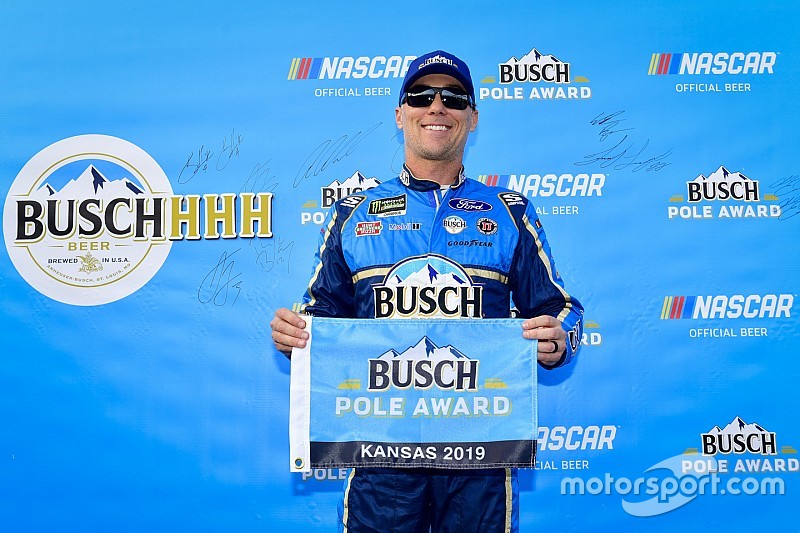 Kevin Harvick is in best position possible to replicate his victory of a year ago at Kansas Speedway.

Harvick, still looking for his first win of the 2019 Monster Energy NASCAR Cup Series season, won the pole for Saturday night’s Digital Ally 400 and will have his three Stewart-Haas Racing teammates lined up behind him.

The pole is the third of the season for Harvick and 28th of his career. It’s also his fourth at Kansas and second in the last three races.

“The mile-and-half race tracks have been quite a handful for us as we’ve gone through the beginning of the season,” said Harvick, who won this race a year ago. “From new cars to different engines and different headers and body builds and new sim files and aero maps – you name it, this is the next step.

“They’ve done a great job. Everybody knew we were a little bit behind but we saw some light at Texas. Everybody’s done a great job today. The car is fast and it drives great in traffic and hopefully when it gets dark tomorrow night, we’ll have another good night in Kansas.”

Harvick was also fastest on long runs in both of Friday’s practices, another good indication that he should be strong in the race as well.

“I think when everybody is in the middle of the big pack, the car is going to push and slide on the restarts and then it will file out and you’ll have to go by them three or four at a time in front of you and then one at a time.

“I’m happy with how my car drove. It has a ton of speed and hopefully we can capitalize on it.”

More driver input or "just make the rules and be done with it?"

Inspection failures send 11 Cup cars to the rear at Kansas