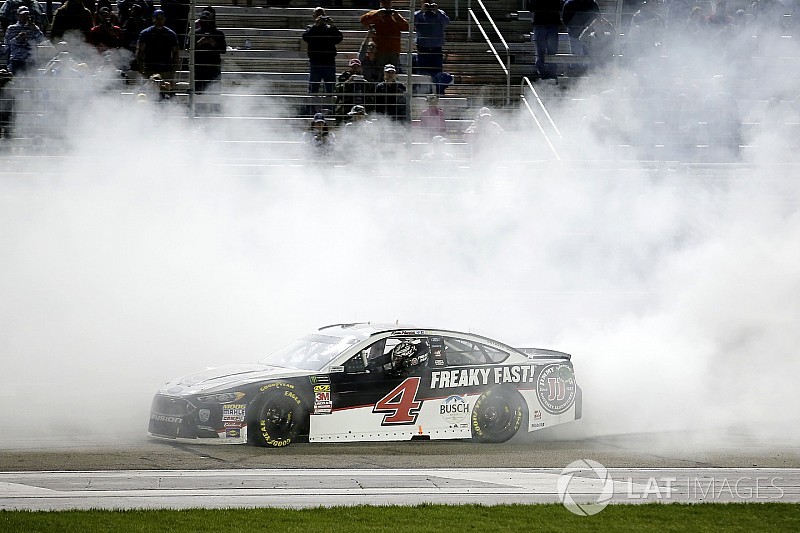 The buzz surrounding the 2018 Monster Energy Cup Series has centered on NASCAR’s next generation.

But age and experience ruled on Sunday at Atlanta Motor Speedway.

Kevin Harvick dominated the Folds of Honor QuikTrip 500, leading 181 of 325 laps. When asked why he and his fellow veterans were running up front at the finish, Harvick replied, “Talladega is in April.”

Brad Keselowski, who finished second, offered that, had it not been for Harvick’s pit road issue with a malfunctioning air gun, “He probably would have led almost 300‑some laps.”

On a track that hasn’t been paved in 20 years, skill and patience was key.

“I had a blast today, and just really, really working your tail off inside the car,” said Keselowski, who led 38 laps. “It feels kind of old school, which I like.”

“It's just an old‑school race track,” Bowyer said. “You've got to take care of your stuff, and this is the way ‑‑ Denny and I came in pretty much at the same time. This is the way most of the tracks were, and how you learned from the guys that we were learning from, the Jeff Gordons and all those guys.

“I mean, this is just the way it used to be when you had a lot of horsepower and you could spin the tires a lot. Then it seems like you get on these tracks like we'll be at next weekend and it's qualifying laps every single lap, and those kids will show back up. If you can figure out a way to wear these things out again, I'd appreciate it.”

Only nine drivers remained on the lead lap prior to Trevor Bayne’s engine blowing up on Lap 297. After Kurt Busch was the beneficiary on the Lap 305 restart and three additional drivers took the wave-around, 13 drivers finished all 325 laps.

Harvick wouldn’t take the bait on whether the youth movement has been over-hyped. He believes NASCAR needs a variety of drivers with different skill sets.

“We need to introduce new people and new stars in our sport,” Harvick said. “I don't have a message other than our sport is great. I love racing cars, and we have to have great competitors to make the diverse fan base have people to root for, and some people like calm, shy Ryan Blaney that knows a lot about the sport, or Chase Elliott, who's been around racing and has those deep ties to NASCAR and the southern roots of our sport. Those guys are all important.

“And when everybody realizes how important the young guys are to the old guys, and the tweeners have to do the same. There's not one person. There's no two young guys that are going to make it, there's no two old guys that are going to make it. This is all about everybody. You have to have somebody to race. I can remember (former NASCAR VP) Jim Hunter sitting in his motor home, and he'd blow cigarette smoke on me and ask me if I wanted another hot dog, and he'd say, ‘Son, you've got to have somebody to pass. Every week it's somebody different. You have to have somebody to pass, and if you don't have anybody to pass, you can't call it a race.’

“We're in a great spot in our sport, and I think tonight there was a lot of experience. Next week there will be a lot of young guys in the mix with a racetrack that's a little calmer with things that you don't have to have in your memory bank. But we're in a great spot in our sport because we have these young guys that are fired up and can drive the car fast and have great stories and have ties to great family heritage of our sport, and you have guys that you've never heard of. And that's what you have to have.”

Clint Bowyer on third-place at Atlanta: "That's what it takes"