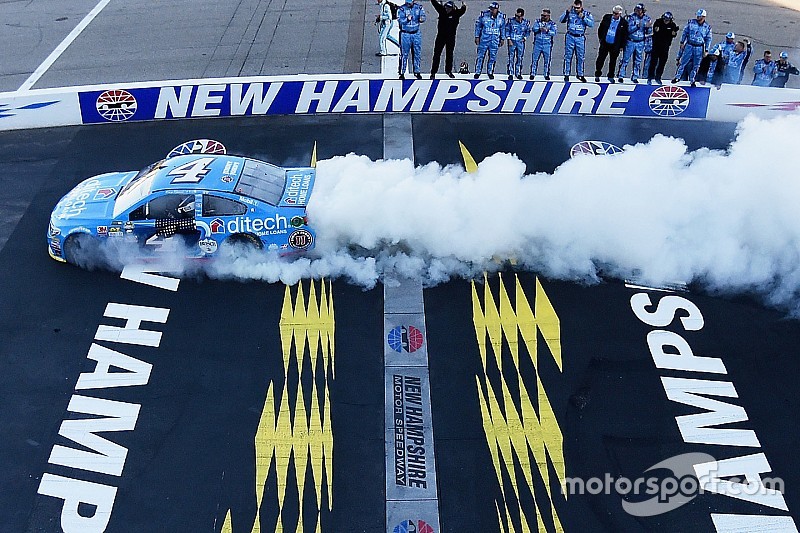 Kevin Harvick believes No. 4 Stewart-Haas Racing team’s commitment to winning races rather than “points racing” has been the key to their success in NASCAR’s most recent Chase format.

“It’s a high-pressure situation and you need to win races, in my opinion, to keep moving on,” Harvick said this week. “I’ve heard a lot more talk about ‘points racing’ this year than I heard in the first two years (of the new format).

Harvick won three races in the Chase, including the season finale, in his championship season in 2014, with the other two wins earning him automatic advance to subsequent rounds.

The importance of reaching Victory Lane in the Chase

Last season facing elimination, Harvick won at Dover, Del., to gain advancement to the second round and eventually landed in the championship race at Homestead-Miami Speedway for the second consecutive season.

Harvick’s win two weeks ago at New Hampshire ensured he would move on to the second round this season, and it turned out to be needed as he finished 37th at Dover Sunday after his No. 4 Chevrolet suffered a broken rear axle mount.

“You can control a lot more of your destiny if you’re winning races in a round then points racing,” he said. “It just leaves you very vulnerable to being eliminated.

“If you have the opportunity to win, you have to push and try to make that happen because you just never know when things like last week for us are going to pop up.”

Eight of the 12 drivers remaining will advance after the next three races, and given Harvick’s team has been one of the most consistent this season, odds are he will advance on points regardless of whether he wins a race.

Harvick said he and crew chief, Rodney Childers, choose not to approach the Chase in that fashion.

“We’re going to the race track to try to win because that’s what’s really made us survive and advance the last two years,” Harvick said. “And you can now argue that’s what’s allowed us to move out of the first round this year.

“Winning controls a lot more of your destiny then just leaving it in the points gods’ hands.”