Hornish is hoping for a solid finish at Sonoma 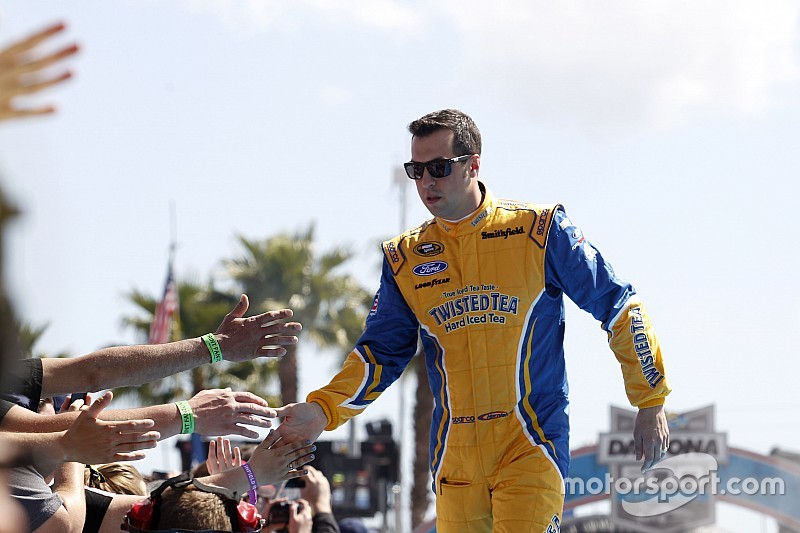 Marcos Ambrose is no longer wheeling the No. 9 car, but the RPM Ford is speedy nonetheless.

It’s new season and a different driver behind the wheel of the No. 9 Richard Petty Motorsports Ford, but Sam Hornish Jr. appears to have picked up right where Marcos Ambrose left off.

Hornish Jr. posted the third fastest lap (95.092 mph) in the first practice at Sonoma Raceway. He was eighth (74.997-seconds) on the speed chart after the second session.

But Hornish could not ask for a better opportunity than to drive the very same Ford Fusion that Ambrose finished eighth in on the 1.99-mile road course last year.

Given the relationship RPM enjoys with Roush Fenway Racing, crew chief Bono Manion has access to the winning setup from Carl Edwards car last year. Needless to say, Hornish has no excuses this weekend, right?

I’m a little bit nervous about it because I know how well that they’ve run over the last couple years and they’ve looked at these tracks as being the ones where we really have an opportunity to win races.

“The last couple of years (the team has) been able to come out here and test and to be able to do that gave them a great opportunity to win,” Hornish said. “Marcos is obviously a great road course racer.  They had pretty similar setups between him and Carl last year and Carl ended up winning the race.

“The cars are a lot different this year with the way that the horsepower is, so that’s the one thing to me.  If we had everything the same as what it was last year, you’d obviously be super-confident, but the fact that there are some differences it does make you ask, ‘Are we gonna get everything translated the way that we need to?’

“I’m a little bit nervous about it because I know how well that they’ve run over the last couple years and they’ve looked at these tracks as being the ones where we really have an opportunity to win races.”

Yes, Hornish struggled in the early stages of his Cup career on road courses. His best result was 31st. Hornish had better results at Watkins Glen, including a fifth-place finish in 2012 — the day after he won the pole for the XFINITY Series race and finished third. The following year in NXS, Hornish again started from the pole and finished second.

Unfortunately, since the XFINITY Series does not race at Sonoma, the seat time has not been available to get the former IndyCar champ up to speed. But Hornish has made adjustments. And for now, he is just looking for a little luck to get over the hump.

“I’ve had speed here each time I’ve been here, but it seems like I’ve always been in the wrong place at the wrong time,”  Hornish said. “Now that was also four years ago and it was with a different team and a lot of things overall were different, but I feel pretty good about it.

“I’ve had a lot of speed on the road courses the last few years.  The last Cup start I had on a road course we finished fifth, so I’m pretty happy with the fact of how I’ve run lately on the road courses in stock cars.  A lot of it has been XFINITY, but I still feel like you do the right things you can get the job done.”

This is the sixth race Hornish has experienced under the direction of Manion. Despite not having the opportunity to test together since their pairing, with each passing week their communication improves.

“Sam is kind of a quiet guy, which is perfectly fine because I’m fairly quiet myself,” Manion said. “His thoughts are collected and he takes his time.  He’s methodical about how he talks about the car.  He doesn’t just shout out stuff coming into the garage area.  He sits for a minute and thinks about his lap and then talks about the car and changes that we need to make.

“All in all, it’s been fun and an exciting new challenge.  We’re obviously off on speed just a little bit, but I think we’ve taken positives out of every race and had some good feelings about the way the car is running.  We may not have collected the finishes that we wanted, but every week we’ve been making the cars better here at the track and at the shop and that’s what has been encouraging.”

Despite sitting 25th in the point standings and with just one top 10 finish to their credit, Manion says he’s had Sonoma circled “as a better opportunity to strike and have that opportunity to make the Chase.”

We feel like Sam excels at these road courses and we’re looking forward at having a chance to win.

“There are so many good road racers in this garage now,” Manion said. “It used to be that we would call in hired guns to put in the car, but that’s not the case anymore.  There is a solid group of road racers and these drivers have taken it to the next level with simulation tools that drivers can use.

“The cars have become so much better and the brakes and the gearing so that the amount of DNF’s now due to mechanical issues has been minimal, so it just puts everyone in that hat to draw out of a win and it could be just about anyone.  We feel like Sam excels at these road courses and we’re looking forward at having a chance to win.”

Could it be his turn?

Last year, Hornish’s RPM teammate Aric Almirola pulled off the unexpected and won the Coke Zero 400 at Daytona International Speedway to punch his ticket for the Chase.

Hornish agrees with Manion that Sonoma could be a wild card track for the No. 9 team — if the cards fall in the right direction.

“I feel like we almost have to have the same amount of things go right here for it to be able to happen because we can get there and lead a bunch of laps, but if somebody slips a little bit in the braking zone and bumps into you, you go from winning the race to finishing 16th,” Hornish said.

“A lot of things can happen here.  You usually get restarts towards the end of the race and it’s more like Martinsville than it is like Watkins Glen, so I feel like it does present us a good opportunity, but at the same time I feel like 90 percent of the places that we go if we hit the same amount of things right there that we do here, we have just as good of a chance to get a top-five finish and maybe a win.”

Bowyer blasts off with top spot in practice