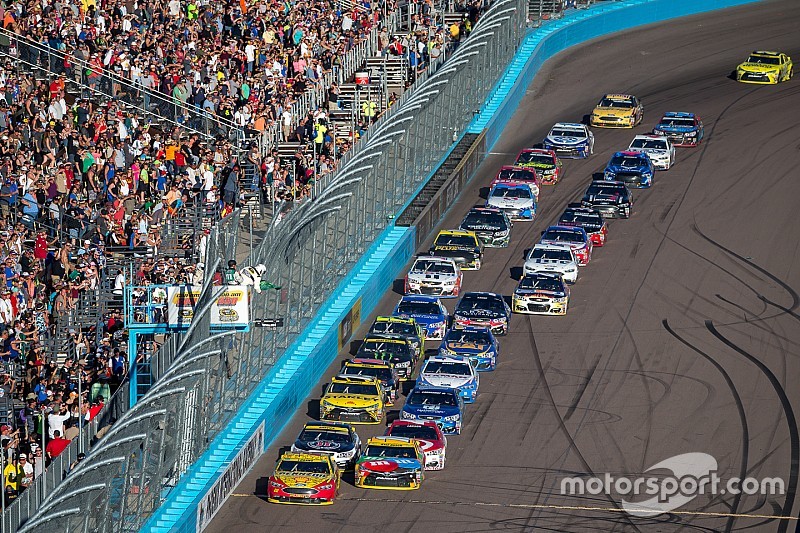 Sunday’s Can-Am 500 offered one of the best finishes in the 2016 Chase to the Sprint Cup.

With only two positions in the Champions 4 Round up for grabs and six drivers competing for those spots, the anticipation entering Phoenix International Raceway was high. But when Michael McDowell spun with fewer than two laps remaining to send the race into overtime, the dynamic changed and so did the expected outcome.

The moment that changed everything

Matt Kenseth led 55 of the last 62 circuits. But on the first attempt at overtime, Kenseth turned down on Alex Bowman in Turn 1, thinking he was clear. Kyle Busch, who was attempting to get to the inside of Bowman, made contact with the No. 88 Chevy resulting in a chain reaction wreck that sent Kenseth spinning toward the outside wall.

“I knew Kyle was going to go three wide,” said Joey Logano of the first attempt at overtime. “He had to. He's racing for a championship. That's the desperation that sets in.

“I saw him go for the block, and then I saw how hard he drove in, and I said, this ain't going to work, so I started checking up really early because I seen it coming, and I just made sure, I was like, ‘Man, I’ve just got to make sure I get underneath it because they're going to come washing up the racetrack pretty quick here.’

“And I was able to get up underneath him and be able to clear him and ultimately take the lead in that moment.”

Kenseth’s wreck set up a second overtime with Logano sailing off to the win. The Phoenix victory was Logano’s second win earned beyond the advertised distance of a race in the Chase.

NASCAR was thrilled with the overtime action as well. Steve O’Donnell, Executive Vice President and Chief Racing Development Officer, said on SiriusXM NASCAR Radio that the sanctioning body has no immediate plans to tinker with the current format, which was amended at the start of this season by adding an overtime line for each track. The race leader must reach the overtime line under the green flag for it to be considered an official start. Prior to the change, NASCAR allowed three attempts at a green-white-checkered finish.

“I’d never say never we wouldn’t change anything, but we’re pretty pleased,” O’Donnell said. “If you go back, and all the controversy…I had to hear about, ‘What are we doing finishing under caution?’ and ‘Why do we have just one attempt?’ So this is an area where we worked with the industry, specifically the drivers, on what was a policy we could put in place that we thought was fair, but would also give us the best chance to finish under green.

“You’ve seen that play out, I thought it was great yesterday that we were able to get in two attempts and were able to finish under green as well and let it play out on the race track. That’s always our goal. We never want to finish under caution if we don’t have to. I would definitely say we like the direction that it’s headed in. Obviously, if we find or hear of an idea that could even improve it, we’ll look at it but there hasn’t been discussion so far.”

O’Donnell also defended NASCAR’s decision to penalize Jimmie Johnson and Martin Truex Jr. for pulling up to pit during the Can-Am 500.

Truex was busted on Lap 85 for passing the caution car and was docked a lap one circuit later. Johnson’s infraction occurred on Lap 133 when he came to pit road as the race leader. After much confusion, Johnson pulled into the No. 48 team’s pits on Lap 137 and served his penalty.

With Truex and Johnson mired in traffic, both were involved in wrecks and ended up behind the wall. Truex’s accident was race-ending for the No. 78 Toyota but Johnson returned to the track and finished 38th.

“We’ve reminded the drivers quite often that it was getting very close that you can’t pass the pace car as you pull off on to pit road,’’ O’Donnell said. “We’ve had that in every drivers meeting as well. Not a surprise to anyone. Jimmie has been racing with us for a long time and is aware of that rule.

“Have there been some borderline situations in the past? Sure. And we’re always going to try to err if we can on the competitor’s side. We’ve been very clear on that.”

“We told the competitors it was something we continue to watch,” O’Donnell said. “Once the 78 call was made, which in our mind was just blatant, very clear in terms of how far in front of the pace car the drivers were, we made a point over the radio again. We obviously penalized the 78 and said again that is something we’re going to enforce.

“Right after that, the 48 was ahead of the pace car as well, and again that was clear on video and so we made the call and wanted to be consistent in the race.’’

The last time NASCAR penalized drivers for passing the pace car was in May at Dover when both Kevin Harvick and Casey Mears were cited 354 laps into the race.

Johnson was as puzzled by the call after the race as he was when the penalty was handed out.

“In 15 years that has never been a concern, and I was always told that the last thing NASCAR wanted to do would be to penalize the leader, and as you pull off onto the apron, you accelerate to the commitment line,” Johnson said. “If you are held by the pace car, you're at a disadvantage as the leader and it allows everybody to catch you and catch up, so even in drivers' meetings they've said, we know you're going to pass the pace car; it's okay. The majority of the tracks we go to, you naturally just gradually pull ahead of the pace car coming to pit lane. I mean, this happens all the time.

“I am still baffled, and I don't know if I will stop being baffled, but all I can say is if they called me on it and they continue to call everybody else on it every week, then shame on me.”

Zipadelli: SHR was "missing something down the stretch" of the Chase