If you can't stand the heat, get out of the race car

On Thursday night, LeBron James could not finish the first game of the NBA play-offs.

After the air conditioning failed at the AT&T Center in San Antonio and the inside temperature neared 90-degrees, James complained of leg cramps. He finally left the game with four minutes remaining on the clock.

When has a NASCAR driver ever allowed extreme temperatures to sideline their effort on the race track?

Sure, it's not unusual for drivers to find a back-up in case of severe illness. But NASCAR drivers are accustomed to racing in extreme conditions particularly during the summer months when temperatures in the cockpit can exceed 140-degrees. 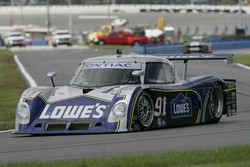 While it would be hard for James to gain sympathy from race car drivers due to the heat, six-time Sprint Cup champion Jimmie Johnson can relate to the pain associated with cramping. He experienced a similar situation when he failed to hydrate himself sufficiently during Grand-Am race at Daytona in July 2007.

For Johnson, it was a double duty weekend. In addition to his normal Sprint Cup activities, the then 31-year-old had qualified and practiced the sports car and shared the seat of the No. 91 Pontiac over the course of the six-hour race. 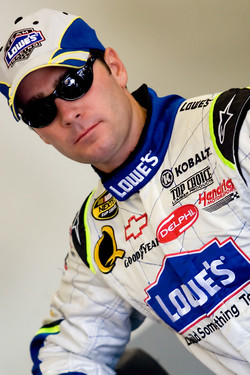 “I got behind on hydration and didn’t keep up while I was in the car,” Johnson said. “I had an electrical problem that took out the drink system in the car. I had to pit maybe 10 minutes before it was time because I couldn’t push the brake pedal hard enough to get it stopped. I missed the chicane on the backstretch. I came to pit road. I got out of the car. Of course tried to get cooled down and have some fluids.

“But about an hour later I started cramping and I actually went into a full body cramp and was stranded inside my motorhome lying on the floor. I wish I had a picture of what I looked like. I mean I’m telling you every muscle in my body locked up. I could barely get to my phone, which was on the table. I knocked it off and then I don’t know if you have ever had a cramp, but try dialing a phone with everything like it is.”

Johnson tried to reach his Hendrick Motorsports teammate Jeff Gordon, who was parked next door in the motor coach lot, but to no avail. Johnson acknowledges, “I didn’t know what I was going to do.”

“Then shortly thereafter he called back,” Johnson said. “I just started yelling at him to get over here. As he came in my bus it took him about two or three minutes to stop laughing at me. Then he got me to the Care Center, and three IV bags later I felt like myself again. That was a very tough experience for me. I didn’t cramp in the car itself; but after, it got me bad. That was a tough one. That was Daytona, July.”

As the NBA season is winding down, NASCAR is heating up – particularly at tracks such as Sonoma Raceway, Kentucky Speedway, Daytona International Speedway and Indianapolis Motor Speedway. Johnson admits that the track that “usually gets you” is Homestead when the Cup tour returns to Florida in November. 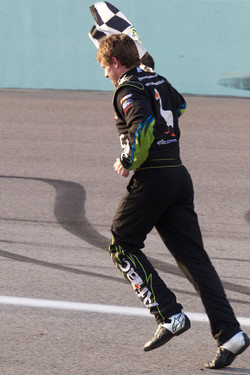 Carl Edwards, who is regarded as one of the most physically fit drivers in the garage, has never suffered from cramps during the course of a race. But heat has challenged him over the years. In his first NASCAR sanctioned race at Memphis, Edwards was uncomfortably hot, then realized his truck was ablaze.

“At one point then threw the caution and I couldn’t see what it was for and then I realized I was on fire and they were throwing the caution because my truck was on fire,” Edwards said. It was so hot. I don’t think it has ever gotten any better, it is just that you get used to the heat.

“I don’t know if there are physiological things that happen or if it is all psychological. As far as heat is concerned, the hottest I have ever been is on some of these hot days. It is usually about plus-140 in the car but I have learned to enjoy it. It is kind of fun when it gets really hard and that becomes part of the race that you have to overcome, part of the difficulty. I look forward to the hot days.” 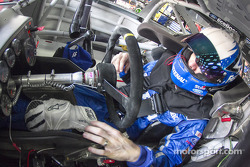 Over the years NASCAR has made significant advances with cool boxes and air ducts to ease drivers’ comfort in the cars and minimize the effects of carbon monoxide. Despite the improvements, Edwards says, if the seats and blowers aren’t adjusted correctly drivers really feel the heat.

“Those guys back in the day without the fans and ducts, those were some men,” Edwards says. “That is tough. It had to be really, really hot…but as far as race car drivers being athletes or not, you don’t have to be an athlete to drive a race car but it is the last little bit that you can do as a driver to be the best that you can be.

“I wouldn’t say we are going to go out and beat an NFL team at something but anyone that doesn’t think race car driving is physically taxing hasn’t driven a race car. It is as simple as that.”

At Texas Motor Speedway, at least half of the 16 cautions in the NASCAR Cup Series race were the result of blown tires.

NASCAR admits missing Byron/Hamlin clash under caution, but will review it