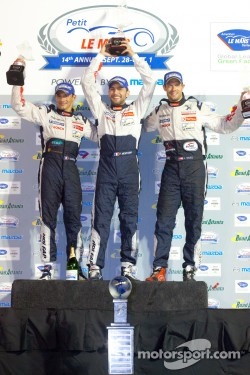 After an incredibly intense and hazardous race, Peugeot won at Petit Le Mans in the United States for the third year running to secure a second Intercontinental Le Mans Cup Manufacturers’ title, ahead of November’s final race in China.

To win the title, Peugeot needed to score 13 points this weekend. On the unusual Road Atlanta track, where traffic (53 cars started the race) can play an important role, Franck Montagny, Stéphane Sarrazin and Alexander Wurz made it to the end of a classic Petit Le Mans race featuring no fewer than ten safety car periods! The three drivers won by five laps from Team Oreca’s Peugeot 908 HDi FAP, driven by Marc Gené, Nicolas Minassian and Nicolas Lapierre.

Third on the starting grid, the Peugeot 908 no. 8 had an incidentpacked start to the race, as explained by Franck Montagny: “There was no lull in the race at all. We picked up a one-minute penalty at the start, so we had to push hard to close the gap and above all not make any mistakes.” The Peugeot no.8 grabbed the lead at 3.12pm and, in spite of prolonged intense battling with its rivals, the car won by five laps, ahead of the Peugeot Oreca driven by Minassian, Gené and Lapierre.

The outcome never truly certain until the very end, the race took a dramatic twist with just over 100 laps to go when the Audi no.1 retired after colliding with a backmarker.

With a three-lap lead over the second-placed car, the end of the race was more clear cut for Franck Montagny, Stéphane Sarrazin and Alexander Wurz. The Peugeot no.8 won, ahead of the Peugeot Oreca no.10. “We are really happy”, enthused Stéphane Sarrazin. “It’s our first win this season for Franck and me, whereas Alex Wurz won this year at Spa-Francorchamps. However, it is Alex’s first win here. As this is the first time the three of us have teamed up, it’s a perfect result.”

The Peugeot 908 no.7, driven by polesitter Sébastien Bourdais, was less fortunate. The car was forced to retire after only two hours of racing (bevel gear) depriving Simon Pagenaud and author of the pole position, Anthony Davidson, of any track time. It was the first time a Peugeot 908 has had to retire this season.

Early part of the race dominated by the safety car

Sébastien Bourdais, starting from pole position, got off to the best start and completed the first lap in front of Marcel Fassler (Audi 1), Franck Montagny and Tom Kristensen (Audi 2). The race was on and it took the leaders a matter of a few minutes before they began to catch the first backmarkers. In the Peugeot no.7, Sébastien was caught off guard in the traffic by Fassler, but the French driver retook the lead just before the first safety car period at 11.40am. Predictably, all the leaders came into the pits to refuel, but the race was barely underway again before the safety car was sent out again. The teams adopted different strategies at this stage. At Team Peugeot Total, the team took advantage of this second safety car period to carry out the second round of refuelling. But both Peugeot 908s were called back to the pits for a one-minute penalty for failing to observe a red light at the exit to the pit lane. The Audi no.2 also lost time after clashing with a backmarker. Back on track in 15 th and 16 th , Franck Montagny and Sébastien Bourdais then adopted an incredible pace to move back up through the field. After fine stints, Franck had moved up to 5 th and Sébastien was 8 th , but he parked his 908 at the side of the track at 1.35pm. The Peugeot no.7 was forced to retire.

The battle of wills began

Franck Montagny continued his stint until 1.45pm. The Peugeot number 8 had by that stage closed the gap to the race leader, Team Oreca’s Peugeot 908 HDi FAP. Franck Montagny then handed over to Stéphane Sarrazin, who commenced a ferocious battle with Marcel Fassler. The lead changed hands with the pit stops, but also out on the track. The battle raged on, Stéphane Sarrazin finally passing his rivals at 3.12pm and then moving clear of them. Also benefitting from a twenty-second penalty handed to his nearest rival, the Audi no.1, he handed over to Alexander Wurz at the half-way stage with a lead of over a minute to second place and a lap to third place.

The gaps settled down at the front, but the race remained very close. The top three had very similar lap times. The sixth safety car period, at 4.58pm, bunched up the cars at the front again. Franck Montagny, back in the Peugeot no.8 had to do it all again. Quick and consistent, he managed to build up a thirtysecond lead, but again, when the safety car came out at 6.00pm, it was back to square one. The restart was fierce, as Romain Dumas, in the Audi no.1 looked for a gap, but Franck Montagny managed to hold him off. Nicolas Lapierre, three laps back, was also right in the middle of the action.

Focussed to the chequered flag

With around a hundred laps to go, there were barely three seconds between the leader, the Peugeot no.8, and the second-placed Audi no.1. Just as the intensity of the racing moved up a notch, the Audi no.1 ran into a backmarker and hit the barriers. Two Peugeots then found themselves at the front, the no.8 holding a three-lap lead over Team Oreca’s 908 HDi FAP. The end of the race was more clear cut. Peugeot therefore went on to seal a third one-two finish at Road Atlanta, the no.8 ahead of the no.10 (Oreca)

Bruno Famin, Peugeot Sport’s Technical Director: ”The objective was to win the title, and that’s what we have done. We have done it with a one-two after a great on-track battle. The race was very intense until the Audi no.1 was forced to retire after a racing incident. After that, there was another type of stress to manage. We had to avoid making any mistakes. We counted down the laps right to the chequered flag. It’s a shame we have had our first DNF of the season. We found the part that had failed, it was the final drive. It's a fairly new part. There is certainly a defect somewhere, we’ll have to look at it in detail. Tonight Peugeot is the champion, Team Oreca has contributed to the title, but it is above all a great achievement for Peugeot. We can now go to Zhuhai with a feeling of liberation, and win again."

Stéphane Sarrazin, Peugeot 908 no.8: “It was a mad race! In spite of the Stop & Go penalty, we clawed our way back very rapidly, driving very quickly despite the traffic. It was complicated right to the end, because as evening fell, some drivers seemed a bit lost. The team did a fine job, I am really proud to be driving for Peugeot! We have come close to winning races on several occasions this season. We’ve been unlucky, but today our efforts were rewarded.”

Franck Montagny, Peugeot 908 no.8: “It was an exciting race, as it always is at Road Atlanta. It’s a race that I love and one where I tend to do well, as this is my third win here. The win and the title, it’s a good day for Peugeot and for us.

Alexander Wurz, Peugeot 908 no.8: “What a day! It was intense in the car, but it was even more difficult just to watch when Stéphane and Franck were driving. It’s an important win for me today; I really wanted to add Petit Le Mans to my track record.” How the race went