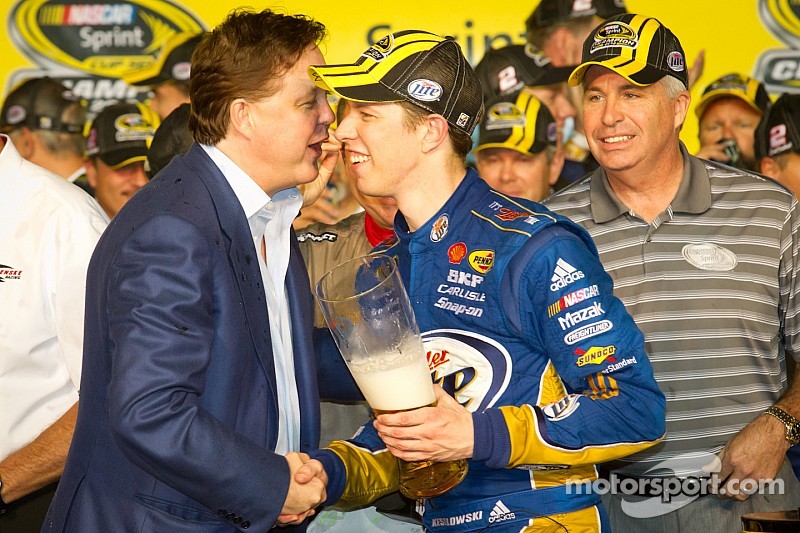 Brad Keselowski had a crisis of conscience in 2013.

After charging to the Sprint Cup title and partying like a rock star with his schooner of Miller Lite held high in 2012, the newly-crowned champ’s conduct--both on and off the track--came under fire. Was his behavior befitting a champion?

In an effort to find balance between giving the 100-percent effort required by NASCAR and attracting the ire of his fellow competitors on the track, Keselowski dialed his aggressive tendencies back in 2013.

Off the track, Keselowski had traditionally turned to Twitter or his media availability to express his opinions on the state of the sport or the topic du jour - that is until his comments were met with disapproval by the sanctioning body.

Admittedly, Keselowski caved. Peer pressure got the best of the Team Penske racer. After fighting his way back from obscurity when his family’s racing business folded, the driver was slowly being assimilated into the sport--and homogenized by it.

As Keselowski lost himself, his drive went along for the ride. In an era when the sport desperately needs its marque drivers up on the wheel, its leader of the Millennials fell short.

Whether you love Keselowski’s brash style or not, the 30-year-old is the only driver of his generation to bridge the gap between NASCAR Next and what’s left of the 30- to 40-something drivers once termed “Young Guns”.

The Champ’s shift was not lost on NASCAR CEO and Chairman Brian France, and the NASCAR boss made his feelings known to "Bad Brad" in no uncertain terms.

I don’t feel like an aggressive driver has the support of the industry to really succeed.

“Well, he and I talk a lot,” Keselowski said. “He called me and spoke with me, whether in person or on the phone, several times during 2013 and at the beginning of '14. He flat out questioned me and my aggressiveness–or lack of aggressiveness last year--and I thought he had some good points.

"I told him point blank that I don’t feel like an aggressive driver has the support of the industry to really succeed. I would tell him, as I would tell you guys, that some of the greats that our sport is known for would not succeed in today’s environment, because they would not be accepted. They would have to go through a lot of B.S. like I’ve gone through. They would either move on or be forced out.

“I don’t know if he agreed with that or not. That’s for him to say. But his words and support were, I think, an endorsement to what he wants to see the racing become, and I’m glad to play a role in that.”

Although Keselowski continues to be criticized by his peers, France is pleased to see the 2012 champ back up on the wheel. He feels Keselowski is doing “a great job of being aggressive."

I think he's doing exactly what he should be doing.

“I think he's doing exactly what he should be doing,” France said. “I've told him that. Everybody has got a right to have their own style of driving out there. If you go back to any of the great ones, Cale Yarborough, Darrell Waltrip, Rusty Wallace, all of them, they faced a similar discussion from time to time as they started to have success on the track, as some of those drivers believed a little bit more contact was necessary sometimes, and they were young and they were getting some words about that.

“But if you go through NASCAR's history, that's what we're about.  I say it all the time:  Late in a race, we expect‑‑there are limits and lines, but we expect tight, tight racing that sometimes will have some contact.  It's in our DNA.”

Let’s face it. Fans appreciate the “boys have at it” philosophy no matter how the rule is interpreted. It sells tickets. It attracts viewers.

Keselowski’s came of age in the Cup Series during that era. However, during his short tenure in NASCAR, Keselowski has become a polarizing figure on the track and off. Some find him too opinionated. Others find him too aggressive.

One thing is for certain, on any given Sunday Keselowski has the talent and the race cars to beat the other 42 cars field. And that’s going to attract a fair share of critics.

In 2014, Keselowski led the Cup Series with a career-best six victories – but he was one short of transferring into the final four drivers at Homestead. Knowing he needed a win at Texas, the Team Penkse racer did not hold back. Of course, that came at the expense of Jeff Gordon which inevitably earned Keselowski more detractors.

But that didn’t keep Keselowski from standing his ground.

“I'm doing everything I can to win this championship, racing at 100 percent,” Keselowski said after the Texas race. “That's something I'm not going to be ashamed for. If I was out there wrecking guys to do it, that would be one thing.  But I think a little bit of rubbing was probably how this sport was created, probably how it should move forward. I don't mind getting raced that way. I don't mind racing that way. I got a little rub there, too, at the end from the 4 car. That's just good racing.”

France agrees. Yet despite taking the chance at Texas, his mechanical issues at Martinsville Speedway sealed his fate in the Eliminator Round and nothing short of a win would change that.

Still, Keselowski insists of “fighting the good fight." Although he finished fifth in the point standings this season, that mantra carried the Michigander to the Cup title – and it will likely not be his last.

With the new Chase format, it’s debatable whether some of NASCAR’s “nice guys” such as Mark Martin or Terry Labonte that thrived without using the bumper could survive in this climate.

Keselowski made it clear that while he’s not afraid to be forceful, he’s not going to simply wreck another driver to win a race. During the Chase, it was clear with a number of drivers that moving a competitor out of the way for position was fair game.

With France’s blessing, this style of racing isn’t about to change any time soon. It certainly isn’t going to change for Keselowski.

I'm not trying to dish out something that I couldn't take myself.

“Last year I got away from being as aggressive as I was in 2012 and this year,” Keselowski said. “I didn't make the Chase. Won one race. That's not acceptable to me. I'm here to win races for Roger Penske and for my team. That means when there's a gap, I have to take it. If it requires a tiny bit of rubbing, that's okay. It's not anything I don't expect on the other side. Plenty of times where I got rubbed. It will go both ways. That's okay by me.

“I'm not trying to dish out something that I couldn't take myself. But these guys have their own code, and they race differently than that. That's their right. We'll go through these battles. I've gone through them before and come out stronger.  I'll go through them again and come out stronger, a better racecar driver. But what I'm not going to do is back down.  I'm not going to get in the spot where I was in 2013 where, you know, I tried to be exactly what they all wanted me to be, because what they want me to be is a loser, and I'm not here to lose, I'm here to win. That means I'm going to have to drive my car, harder, stronger, faster than everybody out there.”

That’s how Keselowski raced at Texas – and how he’ll run every event after that. If the competition doesn’t like it, too bad. If it makes him unpopular, too bad.

Keselowski is going to be successful. He may never win NASCAR’s Most Popular Driver Award, but he will win races. Given the choice, Keselowski will take the checkered flag.

From friendship to championship, Harvick and Childers enjoy the journey together