It's 'Anything Can Happen Sunday' at Talladega

At Talladega, drivers have come to expect the unexpected and be prepared for anything.

When the socially awkward nerds of the television show “The Big Bang Theory,” led by Drs. Leonard Hofstadter and Sheldon Cooper, proudly dubbed Thursday as “Anything Can Happen Thursday,” they just might have been on to something. Their proclamation is a bold statement (for them at least) that they should embrace the unpredictability of what lies ahead.

With the NASCAR caravan heading to Talladega Superspeedway this weekend for Sunday’s Aaron’s 499 (1 p.m. ET, FOX), NASCAR drivers and teams should heed the words of those fictional geniuses and have the mindset that indeed “anything can (and probably will) happen Sunday.”

At Talladega, drivers have come to expect the unexpected and be prepared for anything. The 2.66-mile track has always been a bastion of surprises dating back to its inaugural NASCAR Sprint Cup Series race in 1969 when Richard Brickhouse scored his only victory in the series. In all fairness to Brickhouse, he only made 39 starts over the course of five years, but anyone who says they pegged him as a favorite is lying. 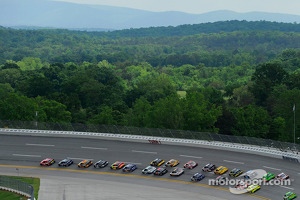 The truth of the matter regarding racing at Talladega is that no one knows what to expect there and its just as hard to identify the favorites. Anything can happen there and it usually boils down to who has good fortune on their side.

Three-time NASCAR Sprint Cup champion Tony Stewart summed it up best: “Someone described racing on the superspeedways of being a combination of a science project and the luck of a casino, and it’s exactly that way.

“You do everything in your power to take care of the science or the technology side. You do everything you can to build the fastest car. If you don’t have the luck to go with it – even if you don’t have any drama with getting the car touched, nothing happens to the car – if you’re just in the wrong spot at the wrong time, it can take you out of the opportunity to take the best race car in the field and win.”

Even last year’s two races at Talladega provided surprise winners. In the spring race, David Ragan avoided a late-race accident that collected 12 cars and was pushed to victory by his Front Row Motorsports teammate, giving the small team its first win in the premier series and its first 1-2 finish. Then in the fall race, Jamie McMurray was out in front of Dale Earnhardt Jr. when a last-lap accident involving Austin Dillon and Casey Mears ended the race under caution.

Although Talladega is the great equalizer and there are no clear-cut favorites, loop data at least suggests that Matt Kenseth, who won seven times in 2013 but has not found Victory Lane yet this season, has a good shot at performing well there. In the past 18 races, he has run the most laps in the top 15 (2,239) and led the most laps (407) with the second-highest driver rating (91.6).

However, past history and stats all go out the window once the green flag waves and drivers begin taking calculated (and sometimes uncalculated) risks hoping for the best. The drivers are in the dark just as much as the fans are in being able to identify favorites and predict the race’s outcome because anything can (and probably will) happen on Sunday at Talladega.

Danica Patrick: All eyes on the prize at Talladega

Marcos Ambrose speaks out about fight with Casey Mears