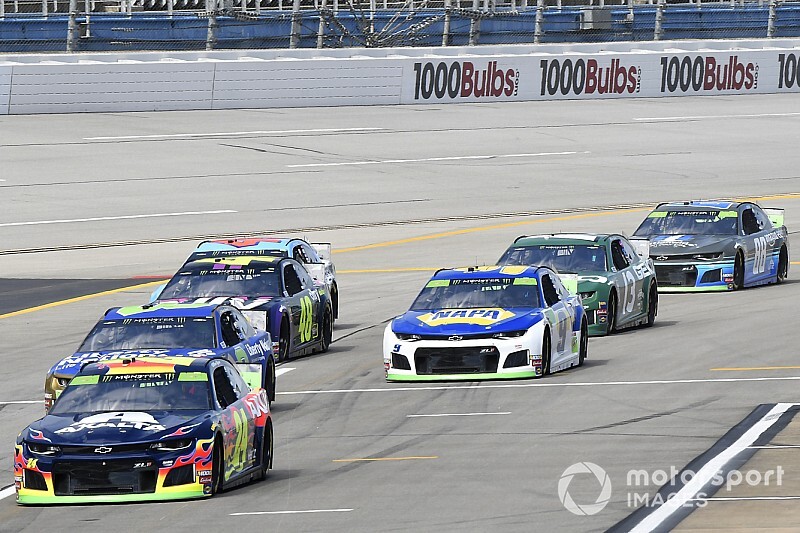 NASCAR Hall of Famer Dale Jarrett has hit out at manufacturers threatening their drivers with consequences if they don’t toe the line when it comes to team orders in winning today’s delayed Cup race at Talladega.

NBC Sports commentator Jarrett, a three-time Daytona 500 winner and 1999 Cup champion, says he understands the requirement for team orders for drivers to work together to increase their chances of a better result, but believes the manufacturers are stepping over the mark with consequences he understands they have been threatened with.

Jarrett spoke after Chevrolet held a meeting between all of its drivers during the rain delay following Stage 1 of the Talladega race, which will restart today.

“Meetings with manufacturers telling drivers what to do ­– I don’t like it,” said Jarrett during NBC’s race coverage. “I understand that race teams work together, I understand asking their guys to work together whenever you can.

“But it doesn’t always suit for a driver, trying to get a victory for their team or position themselves better in the playoffs, and if they’re doing what I’ve been told – that there could be consequences if they don’t follow those orders. I think that is a terrible idea. It really, in my opinion, has no place in NASCAR racing.

“To go win this race, you need help and pushes from someone. I’m not condemning them for wanting their drivers to work together, to get into a better position to do that, but words that I’ve been told about the consequences that a driver may get for not being a part of that, to put himself in a better position to win the race which may mean them helping another driver from another manufacturer, the consequences could be pretty great. I don’t like that idea.”

Fellow pundit Kyle Petty agreed: “Yes, we’ve seen team orders, and manufacturers step in before and recommend their drivers work together, but it’s been about teams winning races – and organization not an entire manufacturer – somewhere there’s been a change of philosophy of what this sport is at Talladega and Daytona.

“For a manufacturer to have a half-time conference here, and to get all its drivers to discuss strategy, I’m not for that. Call me old, and call me old fashioned, that’s OK, but I don’t think it has a place today.”

Following the meeting, the Chevrolet drivers interviewed about it would only respond that they were “talking about the design for the new Corvette”. When Chase Elliott was challenged by the reporter asking “Is this you not wanting to answer anything about what went on?”, he deadpanned: “No, this is me really liking the design of the new Corvette.”