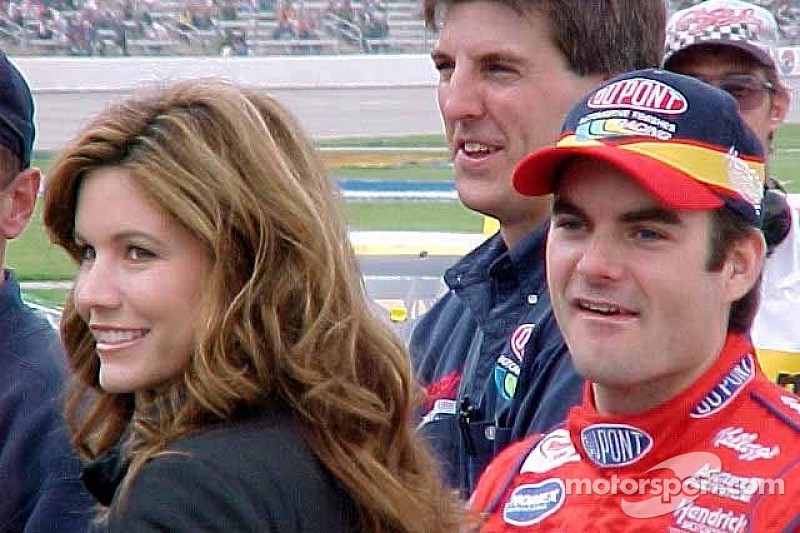 Stop me if I’ve told you this one.

Given the timely resurgence of Jeff Gordon after winning another Brickyard 400, popular demand has suggested that I retell this story, “popular demand” being two colleagues at dinner last night. Blame them if you’ve heard it before.

My depthy research (thanks, Wikipedia!) has pinpointed the date as April 12, 1995. My job at the time was a cross between writing about cars and racing, and writing about television. Because of the first part, I was in New York City for the annual New York Auto Show.

Because of the second part, I knew the people at “The Late Show with David Letterman,” and when my boss wondered aloud if it would be possible to go to that evening’s taping, I made a call and we were in. Then he got roped into a meeting, and I decided to go alone.

Even when you were mistakenly considered a Letterman “VIP,” which I was, you had to stand outside the Ed Sullivan Theater on Broadway for a half-hour or so before they’d let you in. Which I was doing when I turned around and saw who was behind me in line: Jeff Gordon and his wife, Brooke, the former Miss Winston. Prior to their marriage and her resignation, their love affair had to remain a (not very well-kept) secret, because Miss Winstons weren’t allowed to date drivers.

Turns out they were in town for an appearance at the New York Auto Show too, and decided to catch Letterman’s show. By then Jeff had won the Brickyard 400 and a race at Charlotte, and given the Indiana connection he and Letterman shared, it is certain Jeff and Brooke would have been given the actual, real VIP treatment if they had requested it, but didn’t – they just wanted to be fans for a night.

We stood outside and talked life in general, racing in particular for nearly 40 minutes. While Brooke, who was and is gorgeous, got her share of looks from passersby, not one person recognized Jeff Gordon. Not until we got to the door, and the 20-year-old usher told Jeff that he was a big fan.

We sat down, with great seats about 20 rows back, right in the middle. As always, it was frigid inside, like Letterman prefers. I sat next to Jeff: We chatted during breaks, and that was pretty much it – the guests included a politician and an author, who was boring even by author standards.

But there was one more guest – the loopy Drew Barrymore, clearly feeling no pain. When Letterman mentioned it was his birthday, she leaped up on his desk and, facing him, pulled up her blouse and flashed him.

His reaction was priceless. It is generally accepted to be one of the top-10 moments in Letterman history. The crowd went wild, including us.

And that was it. We all shook hands and left. I have, of course, seen and interviewed Jeff occasionally, but that evening was sort of a polarizing moment.

I mention all this not to alert you to my brush with celebrity, but as an example of how Jeff Gordon, who eventually moved to a $9.7 million apartment in Manhattan overlooking Central Park (when he put it up for sale in 2013, asking price was $30 million), could at one time stand on Broadway for 40 minutes and not be recognized.

As you likely know, Jeff and Brooke divorced in 2003, and he met Belgian supermodel Ingrid Vandebosch at a party in the Hamptons, and married her in 2006, and they have two children, Ella Sophia and Leo Benjamin. And a nanny. I don't know what the nanny's name is, but I'm sure she came highly recommended.

Gordon changed what 'NASCAR celebrity' is

But that, I submit, is not the biggest difference in Jeff Gordon’s profile. In 1995, NASCAR drivers weren’t hosting “Saturday Night Live,” or “Live with Kelly and Michael,” or Regis, or Kathy Lee, or whoever, which he has done seven times. His showbiz credits range from “Celebrity Poker Showdown” to “Extreme Makeover” to “The Simpsons.” And he’s been on “The Late Show with David Letterman” five times, not counting the one where he sat in the audience.

In the 20 years since Jeff Gordon won the Brickyard 400, he has elevated himself as well as NASCAR to a status beyond just race car driver, to authentic celebrity. And he has brought a lot of other drivers, including Jimmie Johnson, Dale Earnhardt, Jr. and Danica Patrick along with him.

Gordon should be, will be, a first-ballot member of the NASCAR Hall of Fame, not just for what he has done on track, but off. Those convinced NASCAR drivers were hayseeds and bumpkins have trouble making that argument based on Jeff Gordon. And what’s neat: He has remained surprisingly unaffected. Like him or not, and plenty don’t, he is a consummate professional.

That’s my opinion. His 43rd birthday is less than a week away – wonder if Drew Barrymore is available for the party?