BRISTOL TO PROVIDE A MAXIMUM MOMENT FOR GORDON? 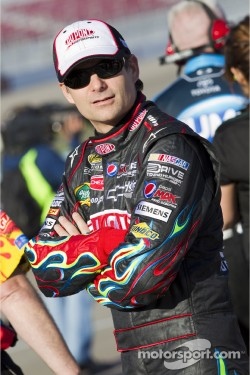 Five-time Bristol Motor Speedway (BMS) winner Jeff Gordon believes the 0.533- mile high-banked track provides the 'ultimate' experience, whether you are sitting inside the No. 24 Chevrolet or sitting on the edge of one of the 160,000 grandstand seats during Sunday's Jeff Byrd 500.

"Bristol is the ultimate, and (the late) Jeff (Byrd) did an amazing job making sure it's a great facility for the fans and drivers," said Gordon, who will drive a specially painted No. 24 Pepsi MAX Impala during a weekend when Pepsi also launches a

'Maximum Moments' promotion. "To have racing here for 50 years is quite an accomplishment. To me, it's not just about 50 years of racing, though, it's about putting on a great event and having some of the best racing we've ever had for such a long period of time.

"When I was running in the Nationwide Series, I'd go up in the spotters' stand and watch Ernie Irvan, Dale Earnhardt, Darrell Waltrip and Davey Allison out there battling during the night Cup races. What a cool experience that was for me as a race car driver watching the racing as a fan.

The 83-time winner, who won earlier this year at Phoenix but was also involved in accidents at Daytona and Las Vegas, has five poles, 14 top-fives and 20 top-10's in 36 starts at the Tennessee track. But much of his success at BMS occurred before a track reconfiguration in 2007, and Gordon and the No. 24 team are looking to change that trend.

"A lot of our success was on the 'old' Bristol," said Gordon, who is 19th in the NASCAR Sprint Cup Series point standings. "Even though the changes made to the track a few years back were slight, we haven't had the same type of strong runs we were used to since the change.

"I learn as a driver each time I race here and we learn as an organization each time, as well. After talking with (new crew chief) Alan Gustafson and the team about Bristol, I'm hoping we can make more gains this weekend and contend for the win." Ending this weekend in Victory Lane would provide the No. 24 team with their own 'maximum moment.'