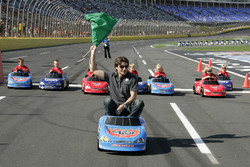 Kids had a blast racing their favorite drivers' replica cars, including Gordon, Dale Earnhardt Jr., driver of the No. 8 Chevrolet, and Jimmie Johnson, driver of the No. 48 Chevrolet. Stadium announcer, Ozzie Altman, provided the commentary while Gordon kicked off the race by waving the green flag. Gordon presented trophies to the race participants who also took home their very own NASCAR Power Wheels vehicles.

"Kids love imitating their favorite athletes," says Russ Coddington, Vice President of Marketing, Power Wheels, Fisher-Price. "With NASCAR being one of the fastest growing family sports, it was a natural for Power Wheels to partner with NASCAR. The cars enable kids to slip behind the wheel and pretend to be one of their favorite racecar drivers."

Not only can kids experience the behind-the-wheel sensation of driving, they can also stylize their cars with authentic NASCAR details. Kids can choose from favorite racers like Gordon, Earnhardt Jr., Johnson and Tony Stewart, driver of the No. 20 Chevrolet. The vehicles deliver two child- appropriate speeds - 2.5 mph and 5 mph, as well as 2.5 mph in reverse. The weight limit is 65 pounds and the vehicle includes a 12-volt battery and charger.

NASCAR Power Wheels, appropriate for ages three and up, will retail for approximately $209.99 and will be available nationally in July 2007.

About Fisher-Price
Fisher-Price, Inc., a subsidiary of Mattel, Inc. (NYSE:MAT) and located in East Aurora, New York, is the leading brand of infant and preschool toys in the world. The Company has a 75-year legacy of high quality toys that enhance early childhood development. Its often-emulated Play Laboratory was the first child research center of its kind in the toy industry, allowing researchers to observe the way children play and how play benefits their development. Some of the Company's best-known "classic" brands include Little People®, Power Wheels® and View-Master®. Fisher-Price is also a leading developer of baby gear products (nursery monitors, infant swings, high chairs) as well as a wide array of character-based toys inspired by high quality children's programming such as Sesame Street®, Dora the Explorer and Winnie the Pooh. The Company's web site, at www.fisher-price.com, provides valuable information and resources to parents.

About NASCAR
The National Association for Stock Car Auto Racing, Inc. (NASCAR), which began in 1948, is the sanctioning body for one of America's premier sports. NASCAR is the No. 1 spectator sport - holding 17 of the top 20 attended sporting events in the U.S., the No. 2 rated regular-season sport on television with broadcasts in over 150 countries, and has 75 million fans. These fans are the most brand loyal in all of sports, and as a result more Fortune 500 companies participate in NASCAR than any other sport.